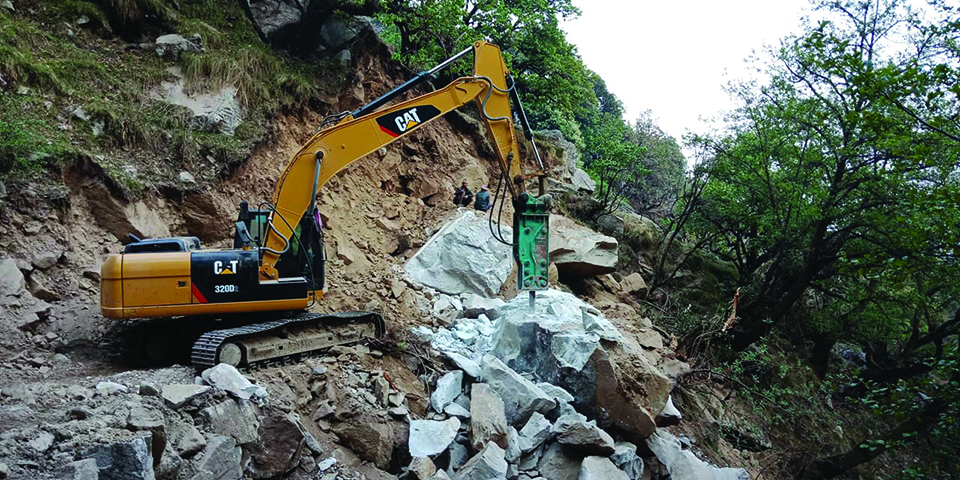 An excavator working on a local road construction project in Kalikot in this recent picture. Photo: Pabitra Kumari Shahi/Republica

KALIKOT, June 21: Local government bodies in the district have drawn flak for not being transparent and abiding by law. As per the law, local bodies are supposed to make their activities and performance report public every four month.  However, even after a year of their formation, they have not made it public even once. On top of that, civil society leaders are accusing the bodies of not availing the information even after the public sought it.

"Transparency is vital for good governance. But that is simply lacking here," noted Amal Raj Shahi, an advocate and human rights activist. "As per the law, the local bodies must publicize their performance report every four month, but they have done nothing like that so far. They are not availing such information even when it is sought by following the due process," he added.

There are nine local bodies in the district, which include three municipalities and six rural municipalities. All of them have come under criticism for not being credible and lawful. Complaints have been filed at the Commission for the Investigation of Abuse of Authority (CIAA) against three municipalities - Manma, Khadchakra and Raskot - for 'spending budget haphazardly going against the procurement law'.

"They are supposed to follow the Public Procurement Act (PPA) while making purchases. But, they are working as they please and in some instances by going against the law. They have not made public documents and budgets related to projects that the municipality is working. It is public's right to know these things," said Shahi.

Transparency is vital for good governance. That is simply lacking here. As per the law, the local bodies must publicize their performance report every four month, but they have done nothing like that so far. - Amal Raj Shahi, a lawyer in Kalikot

Hikmat Bahadur Bista, president of Nepal Bar Association, Kalikot, accused the government of not working as per the law. He said that the government should encourage healthy competition, accountability and discipline in its offices and working procedures by following the PPA. However, the local bodies in the district are blatantly going against the law, he accused.

"They are supposed to keep every record of major to minor projects handled by them along with detailed information about the budget of a project, the contractor hired and other competitors who competed for the project. But the offices are not showing anything even after the information was sought by the public," he said.

Most of the local bodies have prioritized road construction in their development plan and policies. However, locals are not satisfied with the progress.

Locals say that they state restructuring would decentralize power and pave way for holistic development at the local level. However, they say that they seem to have pinned false hopes. The local body came in form after two decades but it miserably failed to delivery, they complained.

"We had thought that the local governments would make our life easier. But the dream did not come true," said Tek Bahadur Shahi, a laborer. A resident of Raskot Municipality-1, he added that use of dozer in construction works has in fact snatched away jobs of poor people like him.

Shahi used to work at road construction sites. After the local government came into existence, 'it spent on nothing but dozers' for constructing local roads, he claims lamenting that this has made dozens of people like him jobless.

"They have hired many dozers and brought them to work here. It seems that they feel that the only way to develop is to user dozers. They are procuring new dozers one after another, without considering what they will do with it in the future," Shahi said. "Their intention is not to give facilities to people or develop this place but to buy whatever lets them make money," he added accusing that the local body officials were buying or procuring dozers for commissions.

As he noted, the local bodies have hired a number of new dozers. In most of the municipalities, chairpersons or mayors themselves own the dozers, stated a local of Raskot Municipality, Khamba Darji. "They are not giving job to locals, they are buying and using dozers as they want," he said. He added that the local bodies are not working in favor of the public and misusing their authorities to earn from it.

KATHMANDU, July 17: After the completion of the first and second phase of local elections except in Province No 2,... Read More...

It's too late to raise the number of local bodies: Paudyal

POKHARA, April 11:Election Commissioner Ishwori Prasad Paudyal has ruled out the possibility of raising the number to local units for... Read More...