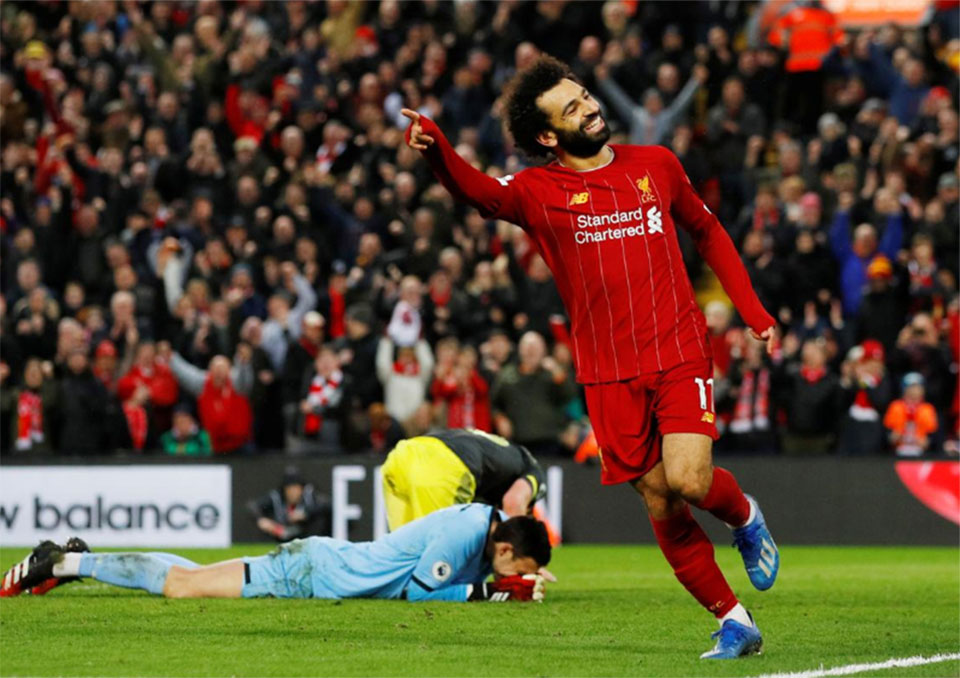 LONDON, Feb 2: Liverpool quickened their march towards a first English title for 30 years as they stretched their lead at the Premier League summit to a staggering 22 points with a 4-0 win over Southampton at Anfield on Saturday.

With nearest pursuers Manchester City playing at Tottenham Hotspur on Sunday, Liverpool increased the gap at the top with a Mohamed Salah double leading a second-half blitz that secured a record-equalling 20th straight home league win.

In the Premier League era, only City between March 2011 and 2012 had previously enjoyed such a winning streak at home, with unbeaten Liverpool now the first English team ever to win 24 of their first 25 matches in a top-flight league campaign.

With the European champions on an unprecedented 73 points for this stage of the season, their distant chasers could only drift further behind with third-placed Leicester City and Chelsea, who are fourth, drawing 2-2 in an entertaining contest.

The 22-point lead is the biggest, at any stage of any season, in English football annals.

At the other end of the table, stranded Norwich City drew 0-0 at Newcastle United while 19th-placed Watford were left crestfallen after Everton fought from two goals down at Vicarage Road to win 3-2 despite playing the last 20 minutes with 10 men.

West Ham United dropped into the bottom three after Brighton & Hove Albion recovered from 3-1 down to earn a 3-3 draw, while Aston Villa are teetering above the drop zone after a 2-1 defeat at Bournemouth, who played most of the second half a man down.

UNREAL SEASON
At Anfield, even the doubters surely do not doubt any longer as Liverpool’s unreal season continued apace with a 42nd game unbeaten in the league, which came only after Southampton had given the champions-elect real problems.

The visitors, impressive in the first half, only capitulated when Alex Oxlade-Chamberlain put the hosts ahead following the break, moments after Saints felt they were denied a penalty.

Captain Jordan Henderson struck the second before Salah took his league tally for the season to 14 with two goals in the last 20 minutes.

At the King Power Stadium, Leicester missed out on the chance to join Manchester City on 51 points as an unlikely headed double from defender Antonio Rudiger earned Chelsea a draw.

The vibrant second-half fare demonstrated again why neither team have been able to muster a sustained challenge to Liverpool, with poor defending enabling Germany international Rudiger to swoop twice.

A header from a corner soon after the break was overturned by goals from Harvey Barnes and Ben Chilwell before Rudiger’s 71st minute equaliser ensured that Chelsea remain eight points behind Leicester’s tally of 49.

The results mean Liverpool need 21 points from their remaining 13 fixtures to be mathematically sure of winning their first title since 1990.

“When we are rolling, it’s difficult to stop,” said manager Juergen Klopp, who said he had never witnessed anything quite like the consistency of excellence being displayed by his team.

UNITED HELD
In contrast, Liverpool’s old foes Manchester United lumbered on, still low on confidence, with not even the introduction of major January capture Bruno Fernandes inspiring anything other than a prosaic 0-0 home draw with Wolverhampton Wanderers.

The stalemate saw the hosts slip to sixth on 35 points, one behind Sheffield United, who won 1-0 at Crystal Palace courtesy of a goalkeeping howler from Vicente Guaita, who dropped the ball into his own net when making a hash of collecting a corner.

The performance of the day was surely Everton’s comeback at Vicarage Road where two first-half stoppage time goals from defender Yerry Mina saw them claw back Watford’s advantage.

Even after Everton midfielder Fabian Delph was dismissed for a second yellow card foul after 70 minutes, Theo Walcott earned a 90th minute-winner on the counter-attack.