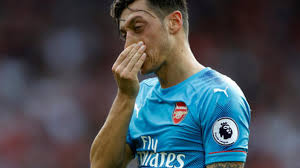 LIVERPOOL, August 28: Liverpool delivered a clear statement of their attacking potency by crushing Arsenal 4-0 at Anfield on Sunday as Tottenham Hotspur’s Wembley worries continued in a 1-1 draw with Burnley.

Champions Chelsea picked up a second successive victory with a 2-0 win over Everton and unbeaten West Bromwich Albion drew 1-1 at home with Stoke City.

Arsenal manager Arsene Wenger described his team’s hammering at the hands of Juergen Klopp’s Liverpool as “absolutely disastrous” and the Gunners’ fans who chanted for his removal would doubtless agree.

Confident from the outset, Liverpool went ahead in the 17th minute when full back Joe Gomez drifted in a cross from the right and unmarked Brazilian Roberto Firmino converted with a straightforward header.

Five minutes before the break, Liverpool broke with a flowing, passing move which ended with Sadio Mane cutting in from the left and driving a low shot into the far corner.

The contest was over in the 57th minute when the ever-dangerous Mohamed Salah stole the ball from a hesitant Hector Bellerin and burst from deep in his own half before slipping the ball home.

Egyptian winger Salah created the fourth with a cross from the left which was headed home by substitute Daniel Sturridge.

“From the first to the last minute, not physically, not technically not mentally we were not at the level and we were punished,” Wenger said.

At Tottenham’s temporary home of Wembley, Dele Alli’s close-range effort shortly after halftime looked to have sealed victory for Spurs but they were made to pay for not converting enough of their chances.

Burnley subsittute Chris Wood, signed last week from Leeds, struck in stoppage time on his debut, getting on the end of a fine sweeping pass from Robbie Brady to claim a debut goal.

The result extended Tottenham’s record to two wins in their last 12 games at the national stadium.

“That is football. It was a tough game. Difficult for us to play. We had the chance to score a second or third but we missed. Sometimes you pay,” said Spurs boss Mauricio Pochettino.

LONDON, Nov 5: With Chelsea leaking goals too easily, Antonio Conte didn't have to search far for the solution. ... Read More...