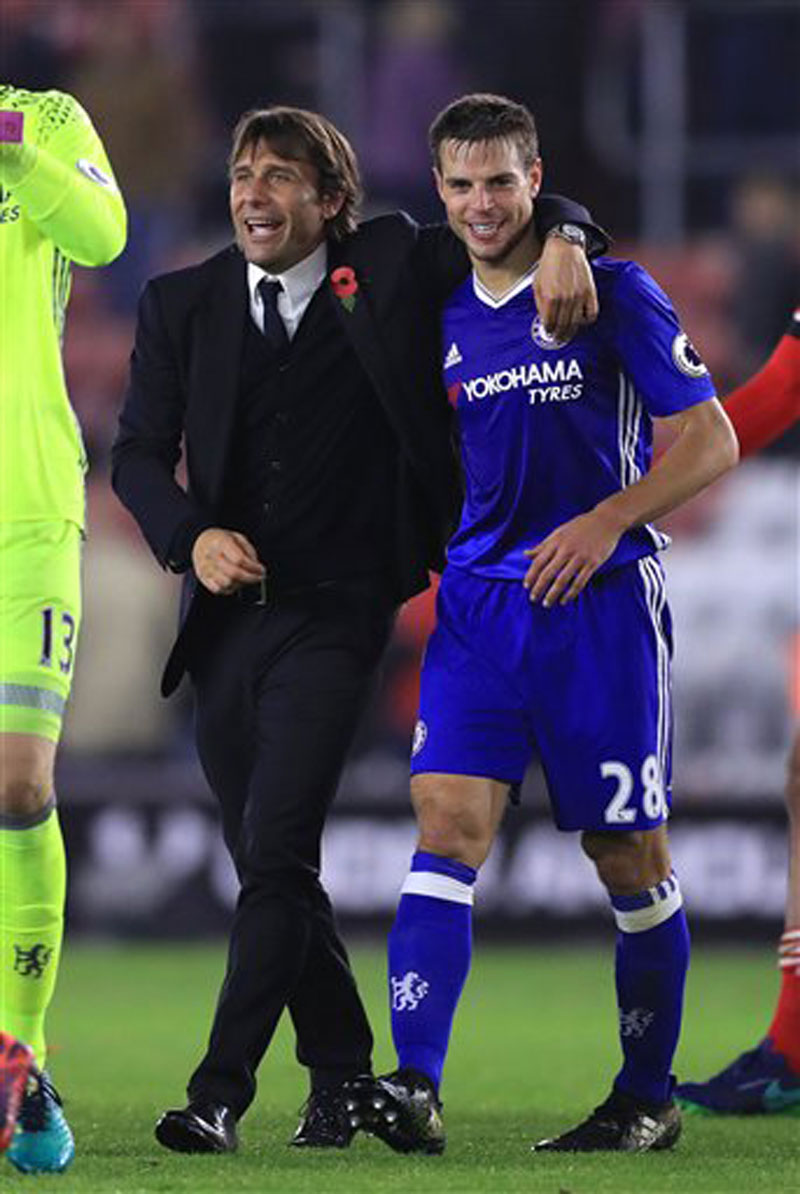 LONDON, Nov 5: With Chelsea leaking goals too easily, Antonio Conte didn't have to search far for the solution.

The Italian manager merely implemented the tactics that served him well with Juventus and his national team.

Chelsea hasn't conceded a goal in the Premier League and has won all four games since Conte removed a defender from its typical four-man back-line. And, with four successive victories since the tactical tinkering, Chelsea has clambered up the standings to join the chasing pack.

Manchester City, Arsenal and Liverpool are only separated by goal difference, and Chelsea, which hosts Everton on Saturday, is a point behind. It's some revival for a team that was on its knees last season, when the reigning champions collapsed and Jose Mourinho was fired.

Gary Cahill has been featuring on the left of the back three with David Luiz in the center and Cesar Azpilicueta on the right.

"Every player has worked hard on the shape the manager has brought in and we are getting the rewards," Cahill said. "It is all right having the shape. It is also to do with having the players with the mentality to go out and do the business when we need to.

"We have the flair players to go out and create and score goals, but we also need them to dig in and defend well."

The turning point was the Sept. 24 loss to Arsenal, when Chelsea had conceded three goals before halftime. Switching to three at the back for the second half shored up the defense and prevented a heavy defeat. Within weeks, Chelsea was delivering a humbling of its own by beating Manchester United 4-0 in the biggest sign that Conte's 3-4-3 is flourishing.

"The central defenders on the right and the left must be very fast and aggressive," Conte said. "The players that play in the middle of the three defenders must be more tactical, must reflect more and find the right position, and also call the line up and down."

Saturday's opponent, Everton, is only four points behind Chelsea and in sixth place despite an erratic spell in recent weeks. The highlights have been holding Manchester City to a 1-1 draw and beating West Ham, but losses to Burnley and Bournemouth could prove damaging to Everton's ambitions to qualify for the Europa League.

Here are the other talking points this weekend:

Arsenal and Tottenham head into Sunday's derby after a week of contrasts in the Champions League. Arsenal secured a 17th consecutive season in the round of 16 with a gritty comeback to beat Ludogorets, 3-2. Tottenham's miserable return to Europe's elite competition after a six-year absence continued with a home loss to Bayer Leverkusen.

With only four points from a possible 12, Tottenham is facing early elimination. It may be shining in the Premier League as the last remaining unbeaten team, but in the Champions League, it just can't win.

Since overwhelming Manchester City 2-0 at the start of October, Tottenham has drawn its threeleague games and only scored twice, dropping to fifth.

Arsenal, though, has won 10 out of 11 games in all competitions. Sunday's derby is the first time the neighbors have met since a late capitulation in May allowed Arsene Wenger to snatch second place and maintain his record of finishing above Tottenham every season since taking charge in 1996.

Leicester will be without goalkeeper Kasper Schmeichel for Sunday's match against West Bromwich Albion after he broke his right hand during Wednesday's Champions League draw with FC Copenhagen. It will be the start of a lengthy, but unspecified period on the sidelines. Ron-Robert Zieler, an offseason signing from Hannover, will step in during Schmeichel's absence.

Liverpool, behind only City in third on goal difference, faces Watford, which is flying high in seventh place. Watford is reeling from the resignation of executive chairman Raffaele Riva amid investigations into the 2014 takeover by Italian businessman Gino Pozzo, and Riva said he will "vigorously" defend his integrity.

Manchester United is behind Watford in seventh and Mourinho's struggling side is away at Swansea on Sunday after a lengthy trip to Turkey for a Europa League game against Fenerbahce on Thursday. Swansea manager Bob Bradley is looking for his first win at his fourth attempt, having collected only one point since taking charge of the south Wales club.

Swansea is three points ahead of winless and last-place Sunderland, which is at Bournemouth on Saturday.

LIVERPOOL, August 28: Liverpool delivered a clear statement of their attacking potency by crushing Arsenal 4-0 at Anfield on Sunday as... Read More...

All IOM exams for Monday postponed
4 hours ago