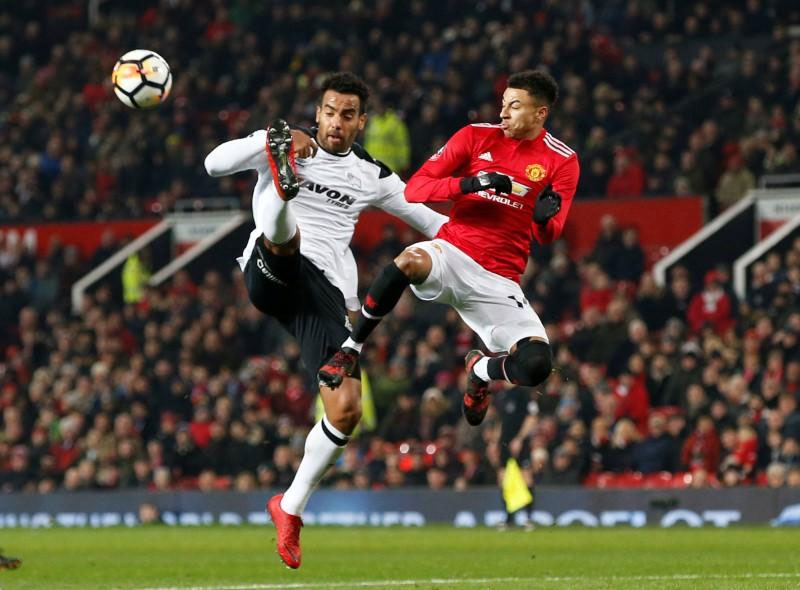 MANCHESTER, Jan 6: Late goals by in-form Jesse Lingard and fit-again striker Romelu Lukaku helped Manchester United to reach the FA Cup fourth round as they ground out a 2-0 home win over Championship (second-tier) side Derby County on Friday.

The visitors looked likely to force a replay before Lingard struck with a first-time shot in the 84th minute for his fourth goal in as many games after a fine brace in a 2-2 Premier League draw with Burnley and another in a 2-0 win over Everton.

Lukaku, who returned from a head injury and came on as a halftime substitute for Henrikh Mkhitaryan, broke away and powered his shot past goalkeeper Scott Carson at the death as Derby threw men forward in search of an equaliser.

The outcome pleased United manager Jose Mourinho, who praised Lingard and Carson after he produced a barrage of superb saves.

“It was a great shot by Jesse Lingard in the top corner, he’s in a moment of confidence where things go well for him,” Mourinho told the BBC.

”He’s a good professional and a fantastic kid in the dressing room.

“I was feeling that we were close to scoring and we never stopped trying. But when you get past 80 minutes and the goal hasn’t come, you fear the second match. But the team kept trying so I knew the goal could arrive.”

United had missed a string of chances as Lingard hit the post with a fierce arrowed shot several minutes before he broke the deadlock and Marcus Rashford also found the woodwork with a glancing header in the opening half.

Carson kept out an array of stinging long range efforts, including three from Paul Pogba as United struggled to find a way through a resolute and well-organised visiting defence.

Pinned back for much of the contest, Derby launched several dangerous raids as defender Marcus Olsson and midfielder Tom Lawrence came close for the Rams, who finally cracked in the closing stages.

Carson was left clutching thin air as Lingard unleashed a swivelling shot into the top left corner from 18 metres and with Derby throwing caution to the wind, Lukaku raced clear to score his 16th goal for United in all competitions.

LONDON, Jan 19: Manchester United is a long way from winning the English Premier League again but is back on top... Read More...