‘Live your life with compassion’ 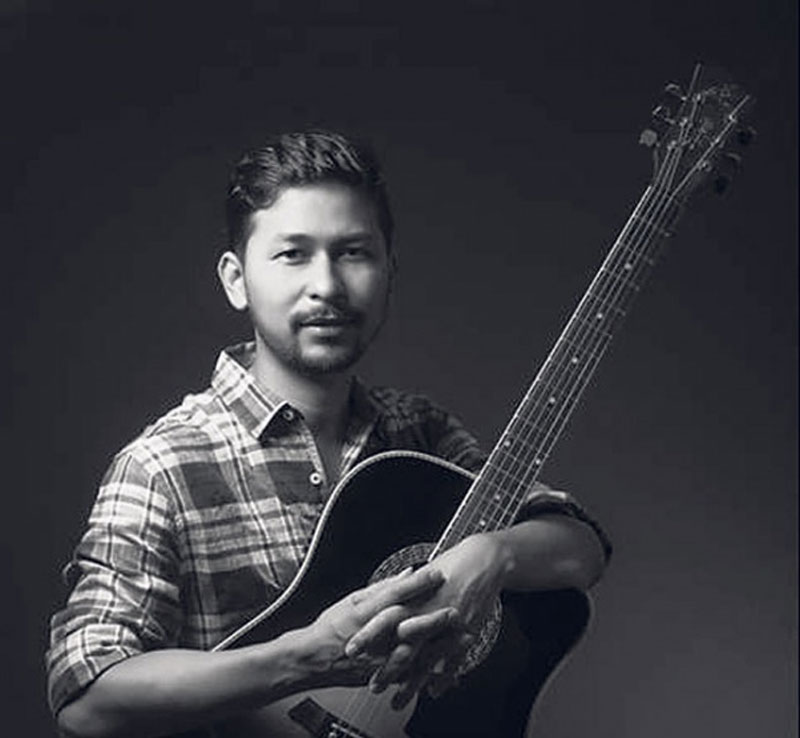 KATHMANDU, Sept 16: Born and raised in Kalimpong, India, Bipul Chhetri is probably one of the most popular figures in the contemporary folk genre. He started his musical journey with Dadhelo in February 2013, and he hasn’t looked back since. The love for the song from Nepali and Indian listeners alike led him to his first studio album, Sketches of Darjeeling, a year later. Now, after loads of sold-out concerts in venues around the world, he has released his second album Maya in 2016.

Prayog Bhattarai got in touch with Bipul Chhetri in late August for an interview. Excerpts:

What were your early days like? Any fond memories that you have?

If you mean school going days, then it was just as fun-filled as it could be. I went to a Jesuit school in Kalimpong called St. Augustine’s and have the fondest of memories. The best recollections are of singing on stage during school functions and also going to different schools to participate in music competitions.

In spite of your western education at the Trinity College, you manage to bring out the very soul of Nepali music in your songs. How do you incorporate the two styles?

Yes, I studied western classical guitar but music at the end of the day has the same number of notes regardless of the language you sing in. Since I was born a Nepali, the Nepalipan remains in you regardless of what you learn and imbibe later in life.

You were born in India. You studied in London, yet you sing songs in Nepali.

I did not live in London to study but yes, I did appear for my LTCL in classical guitar through the Trinity College of Music, London. You should also know that there are millions of Nepalis who were born and brought up here in India and the Nepali language is the lingua franca of the Sikkim and Darjeeling areas. So singing in one’s mother tongue is nothing new.

What attaches you to the Nepali culture?

Everything. This is the culture of my forefathers. So I cannot help but be attached to it, just like you may be.

What was it like to create your first album? What hardships do you most recollect?

The recording part was the toughest. I had never recorded a song in a studio environment before this. So, I was a bit apprehensive about the whole process. The music, lyrics, arrangements and instrumentations were all in my head but the whole process of laying it down was the tricky part. Otherwise, it was not that bad.

The Nepali people love the way you sing. But your songs are on the top of Indian music charts as well. How have you managed to strike a tune with the Indian listeners as well?

India is a very big country with over a hundred different languages and many different cultures all intertwined. Most people associate Indian music being only from Bollywood, which is not true. It may be popular, but that does not really represent the true sound of the varied cultures of this country, which is why music acts as a bridge to all these different languages. So, as long as the music touches someone, they will listen regardless.

In the present times when EDM is the big thing in music, do you think classical melodies still hold the same charm among listeners?

Every genre of music goes through a phase I think. EDM may be popular today, but it could be something else in the next 5-10 years. But classical music and melodies just like folk will always remain. It may be less popular but it will always hold its own.

You’ve performed in venues around the world and have experienced the Nepali diaspora. What has a journey like this taught you?

It shows that we as people are great supporters of our music and culture irrespective of where we end up living.

What is the biggest roadblock you’ve faced in your career? Did you ever consider turning back after Wildfire?

You tend to forget that I actually have a full time career, which is of a schoolteacher and that it has only been two years since I released my first EP ‘Sketches of Darjeeling’. So there have been no stumbling blocks in these two short years as yet, thankfully.

Had it not been music, what would you see yourself doing in life?

Can’t think of anything else.

Do you think there are some changes you’d like to make to the path music is taking these days?

It is not up to me to change anything. Music listening patterns and preferences change every day according to the whims of individuals. So no one can control the path that music takes.

Have you been involved in any social or environmental causes lately?

I try to do my best to help.

Do you have plans to work in Nepal in the near future?

We have lots of plans. Time willing, we will.

Could you tell us a bit about your second album Maya?

‘Maya’ was a fun album to make. Firstly, since I had the experience of making the first one which is always the toughie and secondly, I had a band of musicians who had been with me on the road for a year or so which made things much easier and simpler while laying down the tracks. Most of the songs were written on the road, which is why the tunes are a little varied lyrically and musically while ‘Kahiley Kahi’ was the only song I did not write but only rearranged it a bit as it belonged to my father who wrote it in the early 70s.

Is there any particular message you try to convey through your songs that are overlooked by the listeners?

There is no particular message that I am trying to convey. They are all stories or experiences of mine, which are very plainly written and easily understood, I would think. All songs deal with various topics but are somehow, somewhere linked to ‘maya’ or ‘love’ which could be an illusion to some and real to others.

Finally, what do you think is the purpose of life? Do you have a message for the aspiring teenage singers?

I wish I could give you a philosophical answer but I can’t think of one. All I know is that you have one life, so try and live it with compassion.

Regardless of whether you are a teenager or an older person, keep singing and listening to music. It does not matter whether you have a good voice or not, just keep singing, even if it’s to yourself. For all those aspiring singers who want to take it up professionally, practice.

Live your life! You are precious!

Learning is a continuous process. We learn from everything and everyone. But in this race of learning, we forget to... Read More...

Valentine’s Day can be bad for your sex life!