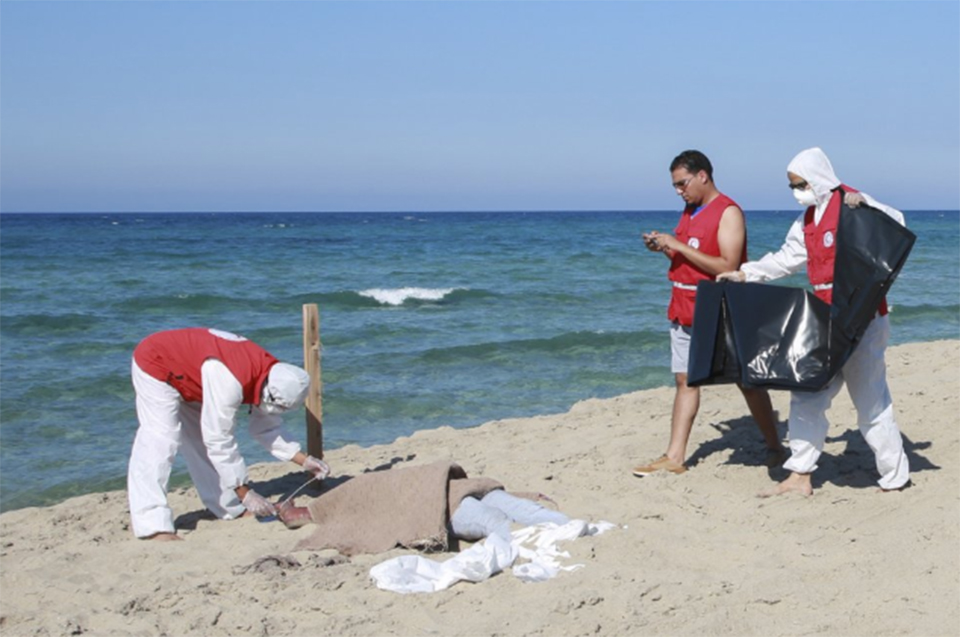 Libyan Red Crescent workers stand around a body of a drowned migrant near the city of Khoms, some 100 kilometers (60 miles) east of Tripoli, Libya, Friday, July 26, 2019. Libya's coast guard recovered dozens of bodies of Europe-bound migrants who perished at sea as search operations continued Friday, a day after up to 150 people, including women and children, went missing and were feared drowned after their boats capsized in the Mediterranean Sea. (AP Photo/Hazem Ahmed)

CAIRO, July 27: Libya’s coast guard recovered dozens of bodies of Europe-bound migrants who perished at sea as search operations continued Friday, a day after up to 150 people, including women and children, went missing and were feared drowned when their boats capsized in the Mediterranean Sea.

A top U.N. official described Thursday’s shipwreck as “the worst Mediterranean tragedy” so far this year.

The Anti-Illegal Immigration Agency in the Libyan capital said that up to 350 migrants were on board the boats that capsized off the town of Khoms, around 120 kilometers (75 miles) east of Tripoli.

The migrants included nationals from Eritrea, Egypt, Sudan and Libya, the agency said. Libyan officials said more than 130 have been rescued since Thursday.

One of the survivors, from Eritrea, said his vessel started to capsize after an hour of sailing. Most of the migrants on board were women, he said, and most of them drowned.

“All of them (who drowned) were ladies ... only two girls rescued themselves,” he said, speaking on condition of anonymity for fears for his safety.

Two other survivors, reached at a disembarking facility in Tripoli, told The Associated Press over the phone they had each paid between $200 and $400 to smugglers who promised they would reach Italy’s shores by sunset Thursday.

Ahmed al-Tayeb, a 32-year-old from Sudan, said he was on one of three boats that capsized an hour after setting off from Libya on Wednesday night.

Egyptian Mustafa Mahmoud, 26, said Libyan fishermen were first to come to their rescue. “I saw lots of bodies, dozens, in the water,” he said. “Most of them were children and women who were not able to swim.”

At least a dozen of the survivors were taken to a hospital in Khoms while the rest were transferred to different detention centers, including Tajoura, located near the front lines of the fighting between rival Libyan factions, the Libyan officials said, speaking on condition of anonymity because they were not authorized to talk to the media.

The Tajoura detention center was hit by an airstrike on July 3 that killed more than 50 people and raised new concerns over the treatment of migrants in Libya. The U.N. refugee agency has demanded the center be closed, but that hasn’t happened.

“This is putting intentionally the life of these people at risk,” Vincent Cochetel, UNHCR’s special envoy for the Central Mediterranean tweeted Friday.

The U.N. migration agency said later Friday that once they arrived, the 84 migrants were turned back from the detention center and were instead being “released gradually” into the town of Tajoura.

Separately from the shipwreck, Ayoub Gassim, a spokesman for Libya’s coast guard, said it had intercepted three rubber boats off Tripoli on Thursday, carrying 269 Europe-bound migrants, including nine women and two children. The 269 were taken to refugee camps in Tripoli, Gassim said.

Amnesty International called Friday on EU leaders to “show some courage” and reverse their decision to halt migrant rescues in the Mediterranean. The rights group appealed on European nations to change their approach and not “condemn those who survive to detention in Libya.”

The European Union has over the past years partnered with Libya to prevent migrants from making the dangerous journey by sea to Europe. Rights groups say those efforts have left migrants at the mercy of brutal armed groups or confined in squalid detention centers that lack adequate food and water.

The EU released a statement Friday saying it was deeply saddened by the tragedy off Libya’s coast and added that “sustainable solutions for search and rescue are urgently needed in the Mediterranean.”

However, it also said “Libya’s current system of managing irregular migration and arbitrarily detaining refugees and migrants has to end.”

U.N. Secretary-General Antonio Guterres reiterated that “Libya is not a safe country of asylum” and stressed that “refugees must be treated with dignity and respect, and in accordance with international law,” U.N. deputy spokesman Farhan Haq said Friday.

After the NATO-backed uprising that toppled and killed longtime ruler Moammar Gadhafi in 2011, Libya became a major conduit for African migrants and refugees seeking a better life in Europe. Traffickers and armed groups have exploited Libya’s chaos since Gadhafi’s overthrow, and have been implicated in widespread abuses of migrants, including torture and abduction for ransom.

In January, some 117 died or went missing off Libya’s coast and around 65 people drowned after their boat sank off the coast of Tunisia in May.

At least 2,500 migrants have been detained in centers in and around Tripoli, where forces loyal to commander Khalifa Hifter are battling an array of militias loosely aligned with a U.N.-recognized government.

Hifter’s attempt to seize Tripoli started in April and has so far killed more than 1,000 people, mainly combatants but also civilians, the U.S. said earlier this month.

The Tripoli-based government blamed the Tajoura airstrike on Hifter’s forces, which denied responsibility and accused government-linked militias of storing weapons at the facility.

The U.N. refugee agency says 164 migrants have died traveling from Libya to Europe since the start of the year, fewer than in previous years. But the agency says the journey is becoming more dangerous for those who attempt it, with one out of four perishing at sea before reaching Europe.

The U.N.’s death toll of 154 did not include the scores who drowned Thursday.