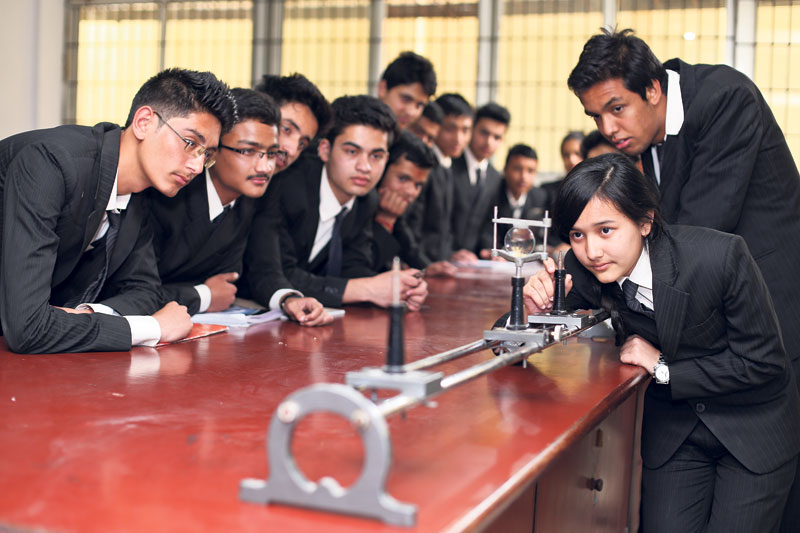 The newly-introduced letter-grading system for the School Leaving Certificate (SLC) has become a topic of discussion. This is the first time the grading system  has been applied in the 82-year history of the SLC held in Grade 10. Parliament  recently endorsed a new Education Act  that provisions  for holding  the SLC exams in Grade 12 and regional/provincial exams in Grade 10.

“The government  tried to implement  the letter-grading system in the SLC since 2005,  and we are now closer to using  the international standard for grading,” said Chandrayan P.  Shrestha,  principal and director of Caribbean College.

Yale University in the United States may  have been  the first university  to start using  the grading system, according to Yale University historian George W Pierson.  In 1785, Yale President Ezra Stiles, after examining 58 Seniors, recorded in his diary that there were “Twenty Optimi, sixteen second Optimi, twelve Inferiores (Boni), ten Pejores”.

Before 1785, US colleges  followed the Oxford and Cambridge models, in which students used to attend regular lectures and engage in a weekly colloquy with their proctor in writing and in person. The proctor would determine  if  the students  had completed the course, and sometimes a panel of other professors would decide  whether  or not the students had demonstrated an adequate mastery of the subject. There were no grades. The only way for a potential employer to compare students’ credentials was on the basis of letters of recommendation.

“The [letter-grading ] system will be gradually enforced in Grades 8-12,” said Krishna Prasad Kapri, controller at the Office of the Controller of Examinations (OCE). “However, the stakeholders are confused about the letter-grading system and try to compare it with the numerical percentage system. It is not comparable as it is an inconvertible evaluation system.”

However,  confusion prevails among students and guardians, said Shyam Sundar Shrestha, vice-principal at  Texas College. “OCE had earlier assured that no one would fail and everyone would get an opportunity to pursue further studies. But the decision of the Higher Secondary Education Board (HSEB) on grade criteria for admission to Grade 11 has left the students and guardians in despair,” he added. “There are no colleges available for studying subjects that HSEB has recommended.”

Educationist Dr Bidhya Nath Koirala argued that  students should be given a chance to improve their grade points in any number of subjects as per their wish instead of allowing supplementary exams for just two subjects. “Students in  developed countries get the opportunity to upgrade their grade points  for subjects in which they scored low grades. They have also managed  credit hour grading,” he added.

Most of the students who appeared in the first SLC exams  with letter grading will not be deprived of  an opportunity for further studies, according to HSEB.

“Students who want to study Science must have achieved a minimum  GPA (Grade Point Average) of 2.00,” said Narayan Koirala, member secretary at HSEB. “Students who have achieved a GPA of at least 1.6  can get admission in any of the other faculties,” he added.  “However, they should secure C+ in Science and Math, C in English and D in other subjects for the Science group, and  C in the major subjects and D in other subjects for the other groups. Anyone with a minimum 1.6 GPA and D+ in the major subjects will be eligible for law, arts, culture, music and different  languages.”

“We are ready to follow the criteria set by HSEB for enrollment in Grade 11,” said Caribbean College principal and director Shrestha.

Prakash Shrestha, chief administrative officer at Xavier Academy, informed that they have set their own criteria for new admissions. “A GPA of at least 3.2 is required for Science and 2.8 for Management in our college,” he added.

“The concept of letter-graded exams should have given a chance to choose a variety of subjects on the basis of one’s strengths and interests,” said education expert Narayan  Koirala. “However, our system does not avail students the streams and the skill-oriented vocational education and trainings  they wish,” he said.

Dr Ram Hari Lamichhane, member-secretary of the Council for Technical Education & Vocational Training (CTEVT), said that all the students appearing in the SLC would be eligible for skill oriented programs under CTEVT. “We have varieties of programs. However, some of the diplomas , including science, engineering and health, need at least a 2.0 GPA or grade C in Math, English and Science, and even Es in other subjects,” he added.

Chandrayan P Shrestha  of Caribbean College and Shyam Sundar Shrestha of Texas College insisted that the government should work comprehensively for enhancing  the grading system in the interest of the students.

“We have to adopt all the features of the grading system as per international practice, eliminating confusion  and setting up criteria for  diverse faculties,” said Chandrayan. “Though we have ended the numerical tradition, we are yet to work on the impact of the grading system and evaluate  students  for tapping their potential as per international practice,” said Shyam Sundar.

Student evaluation is a very complex process that should take many factors into account, according to Marita Moll, head of research and technology at the Canadian Teachers’ Federation. Recognizing the limits of various grading practices and balancing them with common sense and good judgment is an important part of the work of professional teachers, she said.

Grading in education is the process of applying standardized measurements  to  varying levels of achievement in a course. In some countries, all grades from all current classes are averaged to create a grade point average (GPA) for the marking period. The GPA is calculated by taking the number of grade points a student earned in a given period of time in middle school through high school.

The earliest record of a letter-grade system comes from Mount Holyoke College in Massachusetts, USA in 1897. The lowest grade at Mount Holyoke was an E, which represented failure. A represented scores between 95 and 100, while B and C each stood for 10-point ranges. Students could get a D only with a score of precisely 75, with anything below that receiving the dreaded E.

It’s hard to put a date on the end of the E, but it was gone from most colleges by 1930. Apparently, some professors worried that students would think the grade stood for “excellent,” since F stood for “failure.” That said, there’s no evidence of similar concerns over, say, B—which might just as well stand for “brilliant” as “bungled.”

Revival of Gurukul in modern era

KATHMANDU, Nov 5: Seventh grader Om Mahaseth does not prefer to return to his home in Dhanusha district. He is happy... Read More...

KATHMANDU, June 24:The government is all set to enforce letter grading system to evaluate the performance of grade 9, 11... Read More...