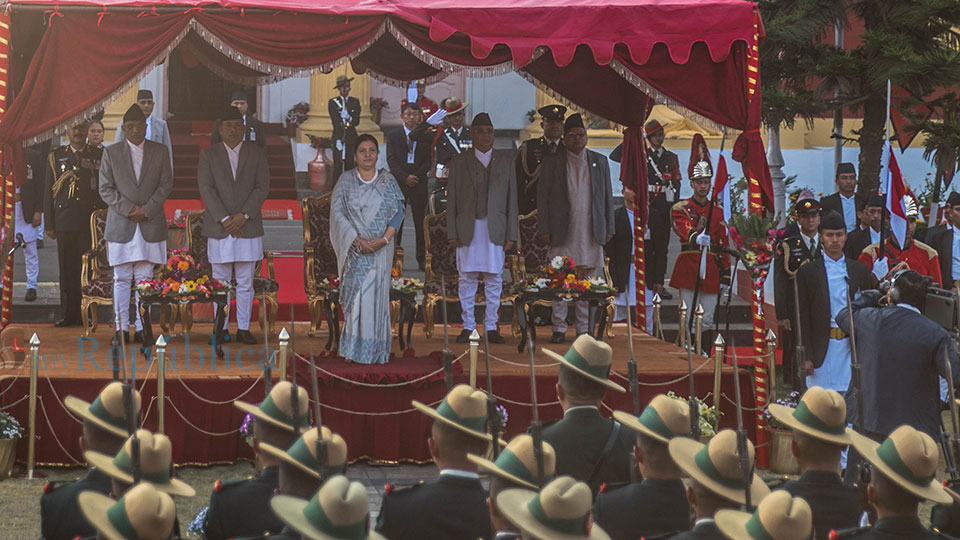 KATHMANDU, March 14: A question has been raised over the legitimacy of the swearing-in of newly elected President Bidya Devi Bhandari after a letter of termination was handed over to Chief Justice Gopal Parajuli few minutes after he administered oath of office and secrecy to Bhandari.

Advocate Om Prakash Aryal says, “The question is raised over the legitimacy of the oath-taking administered by CJ Parajuli whose term had already expired.” However, Parajuli had not received the letter until he administered the oath of office and secrecy to Bhandari.

Judicial Council on Wednesday relieved Chief Justice Gopal Parajuli of his responsibility . The Council, issuing a letter in this connection signed by the Council’s Secretary Nripa Dhoj Niraula, declared Parajuli’s removal from the post while he was administering the oath of office and secrecy to Bhandari, who was re-elected as president for the second term on Tuesday, at Sheetal Niwas.

Legitimacy of works done so far by Parajuli since August 5

Aryal said Parajuli’s job done until today since August 5 will have legal value. "However, it keeps courting questions at the public level. This case is similar to that of then CIAA Chief Lokman Singh Karki’s. His pay perks he received so far has been considered as the remuneration earned for the days he worked."

KATHMANDU, March 23: It has been revealed that Judicial Council Secretary Nripadhwaj Niraula, who handed a retirement letter to former... Read More...

Oli asks PM Deuba: Are you in a position to do nothing?
15 hours ago

Oli asks PM Deuba: Are you in a position to do nothing?
15 hours ago