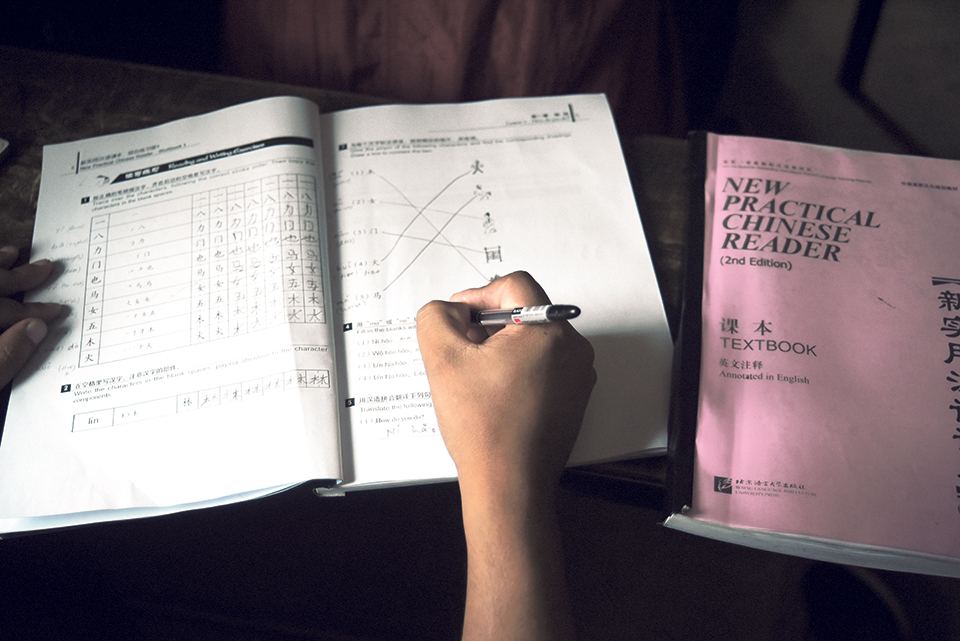 She carries a copy of The New Practical Chinese Reader wherever she goes. Manita Chaulagain, who is pursuing her bachelors’ in social work at Baneshwor Multiple Campus, says she doesn’t go anywhere without this guide even though it’s not a part of her course. But she is attending Chinese language (Mandarin) classes at Biswo Bhasha Campus at Exhibition Road in Kathmandu.

“I’m a student and my schedule is quite hectic. I also have to cook my own meals, clean the house, and wash my clothes too. But learning Chinese is important so I go to class every day at 3:30 pm without fail,” she says adding that she doesn’t take learning Chinese as a burden because she knows, 10 years down the line, her ability to converse in this language will be one of her most valuable and marketable skills. “I believe it will open up opportunities in different fields such as Nepal’s international politics, Chinese economy, and business,” she adds.

Shraddha Gautam, a 22-year-old graduate in Economics, also has similar views. “You don’t need to go very far. Just look at Thamel, one of the most popular tourist hubs of Kathmandu, and you will see how much our country is getting influenced by their language and their culture,” says Gautam who feels that China will be the next economic superpower and their language as important as English.

According to a report by the Nepal Tourism Board, that was released on August 16, 2018, visitors who came to Nepal from China this July soared by an unprecedented growth of 125.4% in comparison to the same month last year. In such a scenario, one can only imagine the urgent need for our tourism sector to cater to the needs of Chinese tourists.

Trying to analyze the present context, Gautam says that China is impacting and influencing Nepal’s economy in a great way.  “They certainly have a great sway over our development and tourism sector. It’s also evident that more trade routes will open up with China in the future,” she adds stating that having a rudimentary knowledge of Chinese language will be of great benefit in the coming years. She also feels that it will especially help the youth pick up opportunities that are right in front of them.

Even Chaulagain believes that the development sector of Nepal is now highly influenced by China. “China is involved everywhere. From funding small reconstruction projects to making huge investments in Nepal, it’s doing a lot,” she says. She feels that having a good command of Chinese will give her an edge over others and help her secure high paying jobs in the future.

Like Chaulagain and Gautam, many youths in the valley are getting increasingly attracted to learning Chinese. Each class at popular Chinese learning institutions around town has anywhere between 40 to 70 students. Harihar Karki, who teaches Chinese language at Bishwo Bhasha Campus, claims that the number of students learning the language has increased over the years. They also seem more inquisitive and excited to learn Chinese as compared to the past. While some students are learning this language to broaden their employment opportunities, others are taking it up merely out of interest and curiosity.

Sushmita Shakya, a recent graduate from Kathmandu University, is learning Chinese because she is fascinated by it. She claims that she has always been inclined towards learning new languages. “Since I already know Nepali, Hindi, Newari, and English, learning Chinese will help me understand the dialect of almost half the world’s population. Chinese also sounds quite exotic and I want to be able to speak the language,” she says.

So much so that Shakya is actually going to Sichuan in China to learn Chinese this year. It’s a one year course and she believes that there isn’t a better way to learn a language faster than going to the place it is widely spoken, listening to locals speak, and interacting with them. “I’m looking forward to a wonderful experience,” she adds.

After the popularity of South Korean entertainment and culture in Nepal, the youth are now slowly getting attracted towards Chinese-style entertainment too. Sakshi Lal, who recently completed her A-Levels, claims that she is interested in Chinese literature, culture, and movies. Although she reads translated Chinese web novels, she feels the translations don’t do justice to the original works. Avid readers like her have to resort to reading Google-translated versions from Chinese sites that are mostly incomprehensible with poorly constructed sentences.

“For readers like us, learning Chinese is a less thorny path to plot satisfaction,” says Lal. But she has not taken up any Chinese Language course till now as she feels that Chinese is a very complicated language. “Unlike most languages, pronunciation is the key in Chinese. The language has words and not alphabets and one must know at least three thousand words to understand basic Chinese properly and that sounds extremely difficult,” she adds.

However, Gautam begs to differ here. According to her, learning Chinese can be very simple if you practice it regularly. She says it’s also very interesting as you get to know their culture and history while learning the language.

“Learning their words is not very difficult. It’s almost like making art. The word ‘horse’ resembles a horse and the word ‘woman’ resembles a woman,” says Gautam claiming that sometimes Chinese even seems a lot easier than English.

There also seems to be a rising trend among the youth to go to China for their education. Chinese universities are now acclaimed all over the world and they are known in Nepal for giving generous scholarships. Even Chaulagain plans to go to China to pursue her further studies if she does not get a well paying job in the development sector of Nepal after she completes her bachelors.

Those who are already studying in China claim that it’s good to understand a country that has the potential to be one of the greatest economies in the future. “The reason I came to China is because I got a Chinese government scholarship,” says Prajeet Tamrakar who is currently pursuing his bachelors in journalism at the Beijing Language and Culture University. He feels that understanding China’s growth and their language will be of great benefit to him in the near future.

Even Shakya feels that Chinese is going to be the most spoken language in the next 10-15 years. She predicts not knowing Chinese in the coming years will be like not knowing English in today’s world (at least for Nepal). “If nothing else, there is a section of the world’s population that speak Chinese. If I know the language I can talk to more people,” says Shakya.

As a Chinese language instructor in Nepal, Karki feels that a sound knowledge of Chinese is now becoming important in almost all the fields. He claims that not only in business and tourism sector but even politically having a command over Chinese can do wonders in fostering ties between Nepal and its huge neighbor China. “China is the next big player,” says Karki adding that it would be a good idea to start getting a basic understanding of a language that’s probably going to an important one in tomorrow’s world. 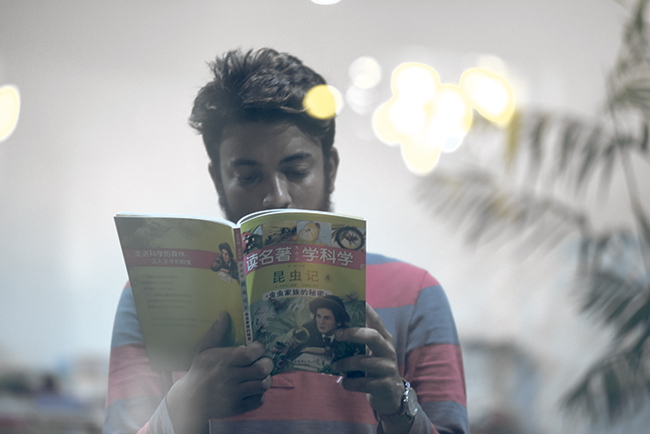