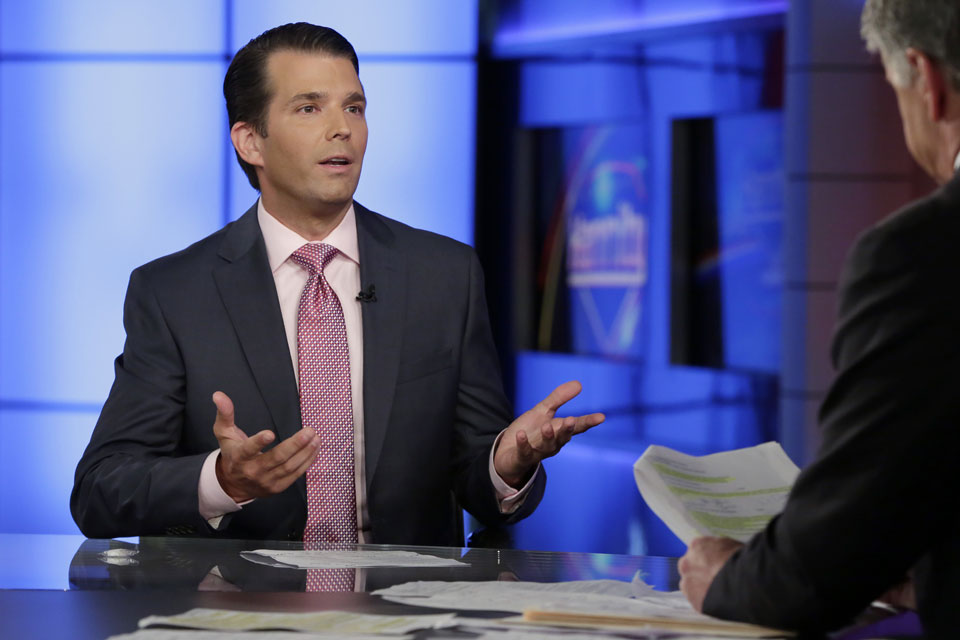 In this July 11, 2017 file photo, Donald Trump Jr., left, speaks in New York. A lawyer for a Russian developer says a company representative was the eighth person at a Trump Tower meeting brokered by Donald Trump Jr. during the campaign. (AP Photo File)

WASHINGTON, July 19: Revelations that a Russian developer's representative was the eighth attendee at a Trump Tower campaign meeting arranged by President Donald Trump's eldest son prompted a new round of castigation on Tuesday from Democrats. It also brought word that the special counsel investigating possible Trump campaign ties to Russia wants more information about the sit-down.

Officials from the office of special counsel Robert Mueller reached out over the weekend to a lawyer for Ike Kaveladze, who also goes by the name Irakly Kaveladze, attorney Scott Balber told The Associated Press. Kaveladze works for a Russian developer who once partnered with Trump to bring the Miss Universe pageant to Moscow,

In emails, Trump Jr. enthusiastically agreed to the meeting with Russian lawyer Natalia Veselnitskaya and others after he was promised dirt on his father's rival, Democrat Hillary Clinton. He has since denied such material ever materialized.

Kaveladze works for Emin and Aras Agalarov and was there to represent them, according to Balber, who is serving as legal counsel for both Kavaladze and the Agalarovs. The father and son, who worked with Trump on the pageant in 2013, were named in the emails that promised damaging information on Clinton.

Balber cast Kaveladze as a minor player in the meeting, saying he had "no idea what the subject of the meeting was until an hour before" and doesn't remember saying anything other than his name during the discussion. Balber said Kaveladze believed he was attending the meeting to translate for Veselnitskaya, but the attorney brought her own interpreter.

Veselnitskaya said the meeting focused on U.S.-Russian adoption policies and a sanctions law. She has denied working for the Russian government.

Democratic lawmakers skeptical of that account repeated their concerns on Tuesday.

Virginia Sen. Mark Warner, the top Democrat on the Senate Intelligence Committee, said his panel wanted to talk to the meeting's attendees.

"I doubt if this individual who had a history of setting up thousands of fake accounts in Delaware was really there to talk about Russian adoptions," Warner said.

Warner appeared to be referring to a 2000 New York Times story that identified Kaveladze as running a company cited in a Government Accountability Office report for laundering $1.4 billion in wealthy foreigners' funds via U.S. banks using thousands of Delaware corporations.

Balber disputed that characterization, noting that no criminal charges were filed in the case.

Balber denied such a meeting ever took place and said he didn't know why Goldstone made the assertion. He said Goldstone stopped working for Emin Agalarov in January for reasons unrelated to last year's meeting.

In an online profile, Kaveladze lists himself as a vice president of Russia-based Crocus Group, Aras Agalarov's firm, and says in a separate LinkedIn profile that he handled tax preparation for the company.

He holds a master's degree in business administration from the University of New Haven in Connecticut, according to those profiles. His most recent U.S. address appears to be in Huntington Beach, California, although several websites he maintains say he is based in Moscow. He didn't respond to multiple attempts to reach him through his online sites.

Kaveladze was named a vice president of the Crocus Group in 2004. He lists among his achievements the development of Russia's Far Eastern Federal University, a cluster of more than 70 college buildings near Vladivostok that Agalarov built, according to websites that contain profiles of him. In 2012, Russian President Vladimir Putin opened the facility and, a year later, gave Agalarov a national "Order of Honor."

The Times reported in 2000 that Kaveladze was born in the Soviet Republic of Georgia in 1960 and graduated from the Moscow Finance Academy — a degree that Ike Kaveladze also reports on his LinkedIn and internet pages. The newspaper reported he operated a firm called International Business Creations, which the GAO report said opened the bank accounts based on the Delaware shell companies.

Also Tuesday, the top Democrat on the Senate Judiciary Committee, California Sen. Dianne Feinstein, said Mueller had approved Manafort and others to testify before the panel, though it was unclear if Manafort would agree to talk.

A person familiar with the discussions, who spoke on condition of anonymity because the person was not authorized to publicly discuss the ongoing investigations, said Manafort hasn't committed to appearing next week and hasn't decided which committees he'll meet with.

US President-elect Donald Trump has responded to a slew of US election related sanctions against Russia with a call for... Read More...