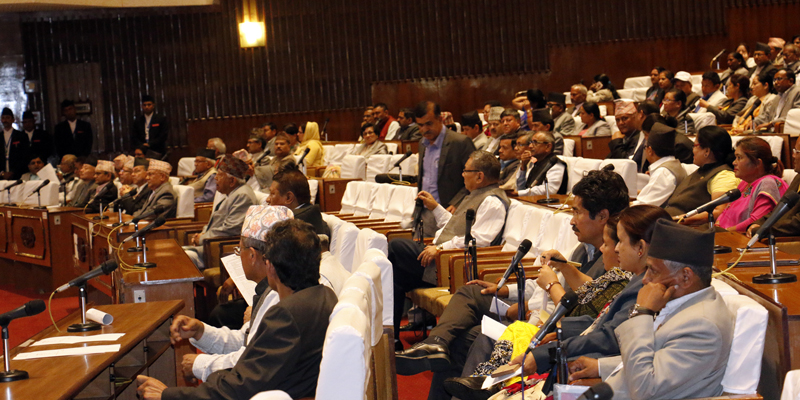 KATHMANDU, March 6: Most of the lawmakers speaking in today's meeting of the House of Representatives suggested the government to resolve the problems of agitating teachers, protesting police intervention on teachers.

On the occasion, Khagaraj Adhikari of Nepal Communist Party said that the teachers contributed for the educational development since long as the temporary teachers should not be left high and dry.
He said, "Demands of temporary and relief quota teachers should be addressed."

Saying hundreds of teachers, who have been launching agitation for their professional welfare and security, have been injured from police intervention, Bal Krishna Khand of Nepali Congress protested such act of the government.

He said," Police suppression on teacher is objectionable. I warn the government not to allow repeat such incidents. Problems should be resolved by holding talks with teachers."

Similarly, Mahendra Raya Yadav expressed sadness towards the police suppression on teachers participating on peaceful agitation. He said, "The government should provide treatment expenses to the injured teachers. Teaching learning activities have been affected as 38,000 teachers are in agitation at a time when SEE is coming nearer. The government should address the demands of agitating teachers to end such situation."

Likewise, Sita Devi Yadav condemned towards political interference on local infrastructure development programme while Dilendra Prasad Badu demanded the government to brief the House about the irregularities and delay in construction of Melamchi Drinking Water Project.

KATHMANDU, Sept 4: The Confederation of Nepalese Teachers (CNT) took to the streets on Monday to protest against the government's negligence... Read More...