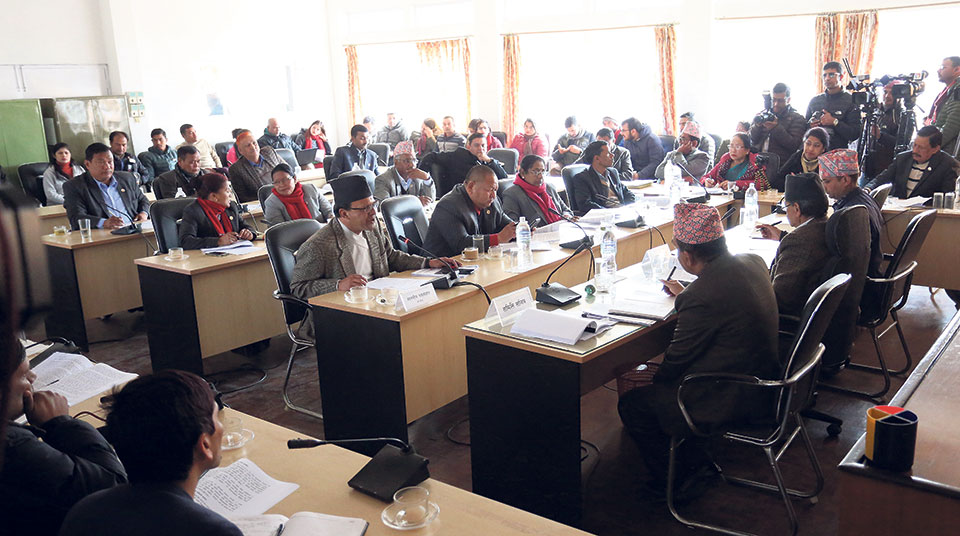 Lawmakers attend the meeting of Public Accounts Committee (PAC) of parliament in Kathmandu on Friday. PAC is discussing the report prepared by its sub-committee formed to probe irregularities in procurement of two wide-body jets by Nepal Airlines Corporation. Photo: Dipesh Shrestha/Republica

KATHMANDU, Jan 5: Lawmakers were divided on Friday over a report prepared by the sub-committee formed by the Public Accounts Committee (PAC) for investigation of the controversial procurement of wide-body aircraft by Nepal Airlines Corporation.

As the lawmakers were divided for and against Tourism Minister Rabindra Adhikari and Home Secretary Prem Kumar Rai, the PAC meeting ended without any conclusion. The next meeting has been scheduled for Monday.

Responding to the sub-committee’s report submitted to the PAC on Wednesday, ruling lawmakers have suggested amending the report, pointing out flaws in it. They also raised questions over the report’s confidentiality and credibility.

Speaking at the meeting, lawmaker Hridayesh Tripathi said that the report should be revised before the PAC approves it. “Recommendation for punishment to the ministers and secretaries is quite confusing. It is not possible to take the same action against all those who are answerable in the wide-body scam,” he said. “The then tourism ministers Jiban Shahi and Jitendra Narayan Dev had permitted payment of the advance and first installment to purchase the airplanes. But the sub-committee has only recommended moral responsibilities to them, while it has recommended strict action against incumbent Tourism Minister Rabindra Adhikari.”

He claimed the report was biased. “Moreover, the report has claimed that there has been embezzlement on the purchase of aircraft engine as well, which cannot be accepted,” he said.

“We are not experts on technical issues of the aircraft, so before deciding on such issues, we need to have expert opinion. We cannot measure all mistakes on the same scale,” Tripathi added.

Likewise, lawmaker Bishal Bhattarai raised questions over the sub-committee’s reliability, objecting to the leak of the report to the media before it was submitted to the committee.

“Such investigation report should be confidential. But here, we get the report through the media before we get it officially,” Bhattarai said.

Raising questions over principles of justice and impartiality, lawmaker Surya Prasad Pathak said that the report has been biased as it recommended only moral responsibility to the officials who started the procurement process made initial payments, while it recommended strict action against the person who just gave go ahead to complete the ongoing process.

“Secretary Rai’s fault cannot be the same as that of MD Kansakar,” he said. “So he should not be recommended the same punishment.”

Likewise, lawmaker Yagya Bahadur Bogati said that as the weight of mistakes would be different, the recommendation for punishment should also be different. “The sub-committee’s report is not complete, it should be revised stressing impartial legal actions,” he said.

Meanwhile Lekh Raj Bhatta stressed on conducting further investigation in the case “The investigation seems to have been done only superficially, The sub-committee should find out the main source of corruption,” he said, In opposition, Tejulal Chaudhary requested PAC Chairman Bharat Kumar Shah to approve the report and take appropriate action. “We all knew there has been financial embezzlement in the aircraft procurement process,” he said, “If we know that it has happened, why do we fear to take action?”

Meanwhile, talking in favor of the sub-committee’s report, Minendra Rijal said the sub-committee was not the Commission for the Investigation of Abuse of Authority (CIAA) to run entire investigation.
“The sub-committee has helped us by finding facts. We should approve the report and direct the concerned authorities to take necessary action,” he added.

Rijal also requested PAC members not to get influenced by their political party’s line. “We are lawmakers. We should not represent our particular party’s agenda. It would be better for us to be free of our political agendas.”

Coordinator of the sub-committee Rajendra Kumar KC claimed that the report was been affected by any political influence. “We are ready to take responsibility for mistakes or errors, if any, in the report.”
The parliamentary subcommittee investigating the controversy surrounding the wide body aircraft purchase had implicated on Wednesday one incumbent minister, two former ministers, and 29 high officials of corruption.

KATHMANDU, Feb 2: Lawmakers have urged the government to announce the date for local poll. Speaking in the meeting of... Read More...