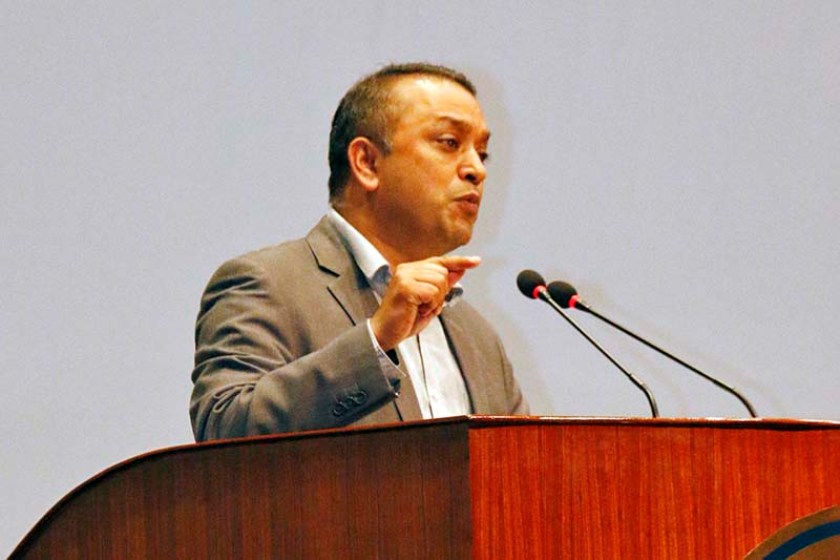 Speaking at the Parliament on Monday, Lawmaker Thapa came down heavily on Prime Minister Oli for his ‘double personality’ saying that he called his predecessors’ state visits to India as the ‘surrenderism’ while the Prime Minister himself embarked on a state visit to India soon after he became the Nepal’s Prime Minister.

“Our Prime Minister roared like a tiger during his speech in defense of nationalism while he was receiving vote of confidence in the Parliament. But he did not speak even a single word on Indian blockade during PM Modi’s recent visit,” Thapa commended.

Thapa also criticized the government for allowing Modi to come to Nepal with his own security personnel clad in dress code arguing that it constituted double personality of PM Oli as he flayed his predecessors for doing the same in the past.

Criticizing that Oli claimed himself as the one only nationalist while the rest are not during the election campaign, Thapa suggested that responsible leaders like Oli should stop using so called nationalistic discourse as a device to simply garner votes.

Meanwhile, he urged one and all to come up with a single foreign policy and lead the nation accordingly.

The following is what Thapa said in the Parliament:

Some media have commented Modi’s visit in connection with the Karnataka's election while some with the growing influence of China. I am not concerned with the comments made by media on Modi’s visit. He himself has said that it was his pilgrimage. His religious visit has become successful. We wish very cordial ties between Nepal and India.  Hence, we are happy with Modi’s recent visit.

My concern is about our Prime Minister. While Prime Minister KP Oli was taking vote of confidence, he, I recall, roared like a tiger but yesterday during Modi’s visit ,while he was speaking about his visit, it seemed as if he was hiding something and kept mum on the Indian blockade.

I recalled the day when PM Oli roared but it did not surprise me. I know that ‘a barking dog seldom bites.’ Prime Minister said, “We have not done anything against the interest of the nation.” No question was raised about it – not on the road nor in the Parliament. Why this humiliation? Prior to the Indian blockade, two Prime Ministers - Pushpa Kamal Dahal and Sher Bahadur Deuba - had held talks with the Indian Prime Minister. PM Oli criticized those meetings as the ‘surrenderism’.

BP Koirala once had described the relations with India as ‘neutral’ for which then King Mahendra had written a letter to Indian government to sack BP, and silently allowed India to station Indian troops at Kalapani.

Nepal's federal constitution was promulgated due to the stance of then Prime Minister Sushil Koirala, which ultimately resulted in the blockade. Is it reasonable to call Sushil Koirala a “surrenderist”? A lawmaker from the ruling party is saying that Nepal government failed to ensure security for Modi when asked why Indian troops came to Nepal during Modi’s state visit. Our question is whether Kalapani issue is being repeated.

UML Chairman had once criticized the Nepal government as ‘surrenderist’ for lavish activities carried out in deference of the Indian President’s visit to Nepal in the past. The Oli-led government hosted lots of activities in honor of Prime Minister Modi during his recent visit. Isn't it Oli's double personality?

Prime Minister has himself said that Nepal will not face Indian blockade anymore.

Some friends have said that ‘we forgive but not forget’. Nepal and India should move ahead in mutual understanding by mending ties. But it does not mean that I forget the woes caused by the blockade.

Pakistan’s Prime Minister does not say that the Chief Minister is discriminating against Muslims while he is visiting India.

Nepal is a democracy. We take this Voltaire’s  statement as a mantra. You may disagree with me. I will be fighting for the rights until the last drop of blood.

We should come up with a common view on the relations with India and China. Nepal reaps benefits from any kinds of foreign visits only when we are united.

Thapa suggested that responsible leaders like Oli should stop using so called nationalistic discourse as a device to simply garner votes.