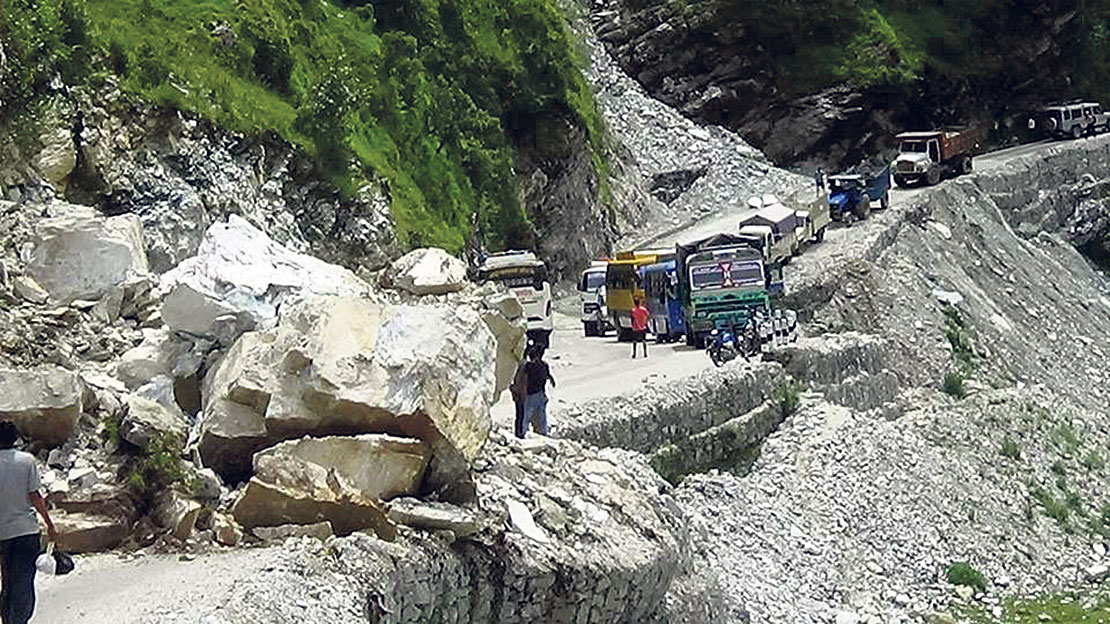 KATHMANDU, July 2: Landslides triggered by continuous rainfall since Sunday have blocked vehicular movement along a number of busy highways across the country, leaving hundreds of passengers stranded.

Vehicular movement has been halted in the recently upgraded Mugling-Narayanghat road due to major landslides at two places.

Likewise, landslides have also obstructed the road along Prithvi Highway in Majhimtar and Krishnabhir of Benighat Rorang Rural Municipality.

Meanwhile, a jeep suffered minor damage after being buried by a landslide at Krishnabhir. The jeep was en route to Kathmandu from Lumbini.

Similarly, a landslide near Siddhababa had briefly obstructed two-way traffic along Siddhartha Highway too. With the halt in vehicular movement, passengers were marooned as they were stuck in the middle until the traffic was resumed again.

Rainfall has resulted in landslides not just in one but in dozens of places in Bajura district. This has halted the vehicular movement along Sanfe-Martadi road section. Transportation was blocked along the road section from early Monday.

It had just been a year that PS Construction Company had completed blacktopping the road section. In some places, huge mounds of earth have fallen onto the road while the road has been washed away in other places. Vehicles to and from Martadi have been stuck on the road leaving passengers helpless, informed Sub-Inspector Sagar Bohora.

No vehicle has been able to ply the 27-kilometer road section. However, this is not the first time this road has been obstructed by landslides. The under-construction concrete bridge over Guigad River remains incomplete since the past eight years.

Likewise, more than 15 settlements of Terhathum face the risk of displacement following floods and landslides. District Natural Disaster Rescue Committee (DNDRC) has urged the locals of those communities to stay alert.

Since the incessant rainfall has started taking its toll on the lives of people, the DNDRC, Red Cross, police among others have identified the settlements with high risk of flooding and landslides and issued a notice informing the people to stay alert.

After a field visit, a technical team of the Red Cross has published a notice naming the places and settlements which are likely to be swept away by landslides. In fact, officials of various organizations have been visiting houses and informing the residents to take precautions against landslides and floods, informed Bednidhi Khanal, Chief District Officer (CDO) and coordinator of DNDRC.

In a bid to extend road connectivity to various wards of two municipalities and four rural municipalities of the district, huge sections of land have been dug up in Terahthum. The locals said they are unable to sleep due to landslide fears.

Locals have not even been able to plant rice on time as the swollen Piguwa River has swept away the irrigation canals. On Monday, they were busy repairing the canals. Last year, landslides claimed three lives in Myanglung-5, Amdi.

Furthermore, rainfall since Sunday has claimed a life, displaced 14 families and inundated around 100 houses in Kailali. Dutha Rana, 62, of Godawari Municipality-9 died after being crushed by his own house on Sunday night. As of now, 14 displaced families of Godawari-9 have been sheltered at Karneshwar Secondary School. Flood has also blocked the Dhangadhi-Attariya road section.

(Our correspondents Krishna Oli from Bajura, Bahgishwor Limbu from Terhathum and Dil Bahadur Chhantyal from Dhangadhi contributed to this report).

KATHMANDU, July 15: Landslides triggered by continuous downpour since last Thursday have disrupted vehicular movement along all the highways in... Read More...