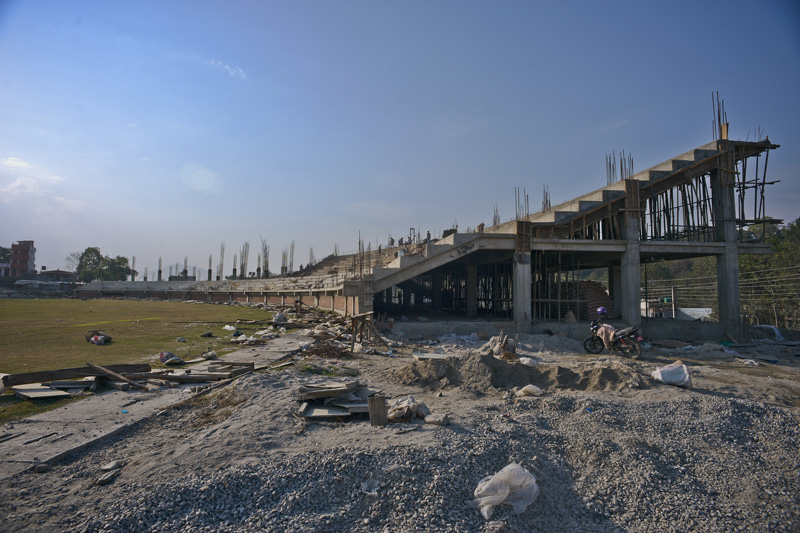 KATHMANDU, March 2: The construction of Mulpani International Cricket Stadium which started a decade ago will take at least three more years if everything goes smoothly. However, the second phase work of the under-construction stadium has been obstructed due to land acquisition issue and it may be delayed further if the issue is not solved. Unfortunately, there are no good signs that the construction will finish on time.

Though the first phase construction work is on the verge of completion, National Sports Council (NSC) has still not started the bidding process to start the second-phase work after failing to acquire the needed land.

“The first phase of work will be completed by the end of this fiscal year but to start the second phase work we need additional 52 anas of land which we still haven't acquired in order to complete the construction work,” said Bishwamitra Sanjyal, NSC's engineer who has been assigned as site engineer of the stadium having capacity to accommodate 13,000 spectators.

NSC has been unable to acquire the land after the owners refused to accept the compensation package. As a result, the ground is yet to get full shape while other construction works including that of pavilion, the parapet, changing room, media room, scoreboard and  pillar for lights which will take place in the second phase.

NSC had published a notice to land owners requesting them to accept the compensation package of the land but they didn't agree with the price they were offered. “We published the notice on February last year, but no one came to receive compensation expressing their disagreement on the price of the land offered by the NSC,” added Sanjyal.

A budget of Rs 170 million was allocated for the first phase of work and Rs 140 million has already been spent, according to Sanjyal. For the second phase, the NSC has already allocated a budget of Rs 850 million and is ready to start the bidding process with the target of completing the construction works within the next three years.

“The money required for construction is already allocated. We are ready to start the bidding process. Once the land issue is solved, we will start the second phase work,” said Sanjyal. “The contractor will be given the deadline of three years to complete the second-phase work once the contract is signed.”

Meanwhile, the first phase of work that started in February, 2015 and was supposed to complete in July, 2016 has been delayed by one year. The contractor attributed the dealy to the earthquake and the economic blockade faced by the country. However, the first-phase work that includes construction of the ground, three blocks of parapet, drainage will finish by the end of this fiscal year.

In the meantime, the NSC has decided to allocate Rs 1.6 million to make the upper ground of Mulpani International Cricket Stadium playable.  Various stakeholders of Nepali cricket in October last year had submitted a memorandum to the Minister for Youth and Sports Daljit Sripali asking him to release the budget for making the condition of Mulpani cricket ground playable. Cricket stakeholders to submit the memorandum were current and former national cricketers, coaches, umpires, technical staff and employees of Cricket Association of Nepal.

Project construction works should be completed on time: PM Dahal