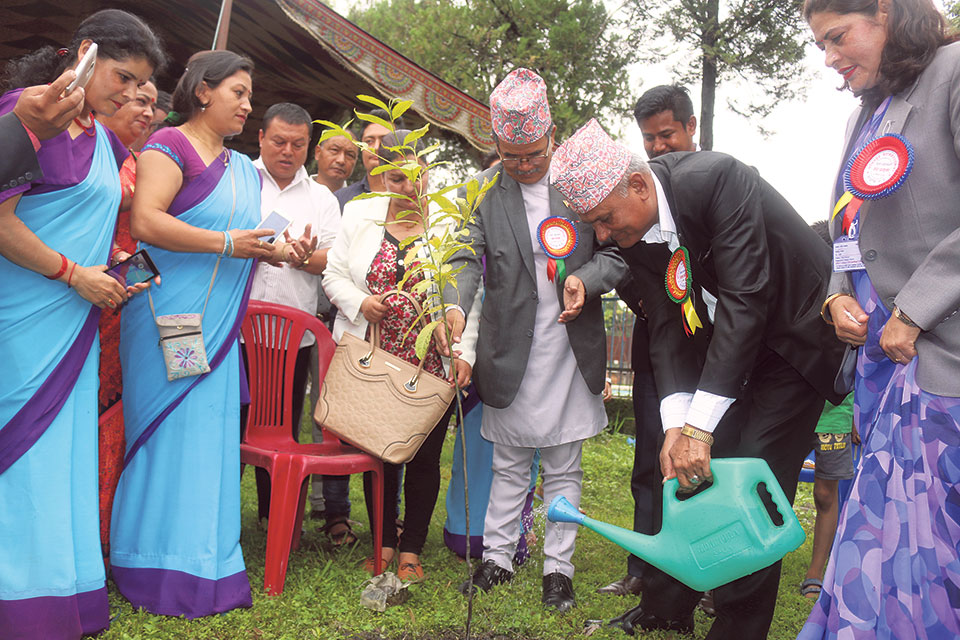 Minister Farmullah Mansur and Mayor Chiribabu Maharjan among other inaugurating the first municipal council meeting of Lalitpur Metropolis on Friday. Minister Mansur had planted a Rudraksha tree on the occasion. (Deepak Kharel/Republica)

LALITPUR, July 15: Lalitpur Metropolitan City’s mayor, Chiribabu Maharjan, has been making exciting announcements. After the recent announcement of constructing flyover and monorail in the metropolis in collaboration with Kathmandu Metropolitan City, Maharjan has just unveiled a few more plans. Meanwhile, he also said that the flyover and monorail projects are in progress.

The flyover from Bagmati River to Pulchowk will be 1.4 kilometers long. After a recent meeting with Bidhya Sunder Shakya, mayor of Kathmandu metropolis, Maharjan said the two metropolises have reached an agreement for a joint venture for the project. He said that the project remained the top-most priority during their board meeting.

“Now it has been included in the plans and policies of the metropolis. Things are in progress,” he said.  The metropolis has planned to construct the flyover with support from donor agencies. The estimated cost is around Rs 13 billion.

Unveiling an eight-point plan and policy on Friday, Maharjan stated that other flyovers are also in consideration at various places having maximum problem of traffic jam. Flyovers have been proposed for Gwarko, Balkumari, Satdobato and Ekantakuna. “We are also planning for vertical parking in the metropolis,” he said.

The metropolis is going to promote tourism, alternative energy, sustainable development, better transport, better sanitation and conservation of heritage sites, among others.
Similarly, gender equality and care for elderly and young kids would be another priority, Maharjan said.

If things go as Maharjan says, Lalitpur is going to be a planned city in days to come. Demolishing of haphazard structures to replace them with better ones are also in the policy.

“We are going to end the state of chaos. The city is going to look better, feel better,” he said. “We are going to work hand in hand with all concerned bodies, all agencies, locals,” he added.

Acknowledging the lack of coordination between the Department of Roads and the drinking water supplier Kathmandu Upatyaka Khanepani Limited has incurred huge loss to the government, he said that the roads are constructed by one and destroyed by the other. Maharjan said that such silly mistakes should come to an end.

“The Department of Roads constructs roads and the drinking water supplier later destroys it to lay pipelines. This is happening due to the lack of foresightedness. We must plan and act wisely,” he said.

He added that his team is going to put a full stop to such ‘a chronic disease’.
“If you work with proper coordination with all concerned agencies and stakeholders, you can save a lot of money, time and energy. We are going to act smartly,” he said.

Presenting a budget of Rs 3.2 billion for the new fiscal year, Maharjan said that the investment would be directed toward making the metropolis a prosperous cultural city. For the conservation and promotion of several caste and communities in Lalitpur, separate programs and funds would be allocated, Maharjan added.

Maharjan also informed that the metropolis will now allow black topping of roads unless they are less than one and half inches thick. “They construct roads every year. And those roads do not last even a year. We have decided to seize the deposit amount and not return it to contractors unless we check the roads for a year,” he said.

He added that each of the 29 wards of the metropolis is going to get Rs 5 million as development budget.
Maharjan also informed that there is a plan to set up electric crematorium at Shankhamul. “We are going to build it and bring it into operation as soon as possible,” he said.
The metropolis also has a plan to run Sajha bus from Bungmati to Godavari. Connecting the two historical places is going to be great, Maharjan said. For this, the metropolis has purchased a share of Rs 10 million from Sajha Yatayat, Maharjan informed.

Lalitpur was promoted to metropolitan city from a municipality on March 14.

Muslim Minister inaugurates first municipal council meeting by planting Rudraksha
In what can be considered a beautiful sign of religious harmony, Minister for Labor and Employment Farmullah Mansur on Friday planted Rudraksha tree while inaugurating the first municipal council meeting of Lalitpur metropolis. During the program, Lalitpur’s Mayor Chiribabu Maharjan said that the plant is very special and is the symbol of lasting memory.