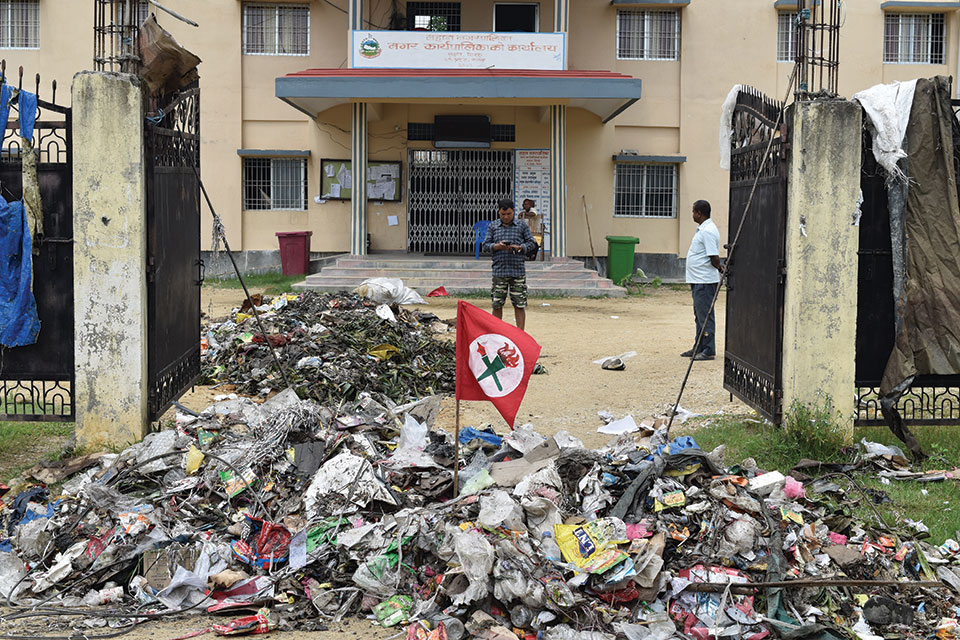 LAHAN, Aug 5: Two sister wings of the main opposition Nepali Congress (NC) joined hands to collect the garbage left to rot on the streets in Lahan Municipality of Siraha district. The garbage was left uncollected by the municipality for the past 18 days.

The municipality's mayor Muni Sah had instructed his subordinates not to collect the garbage due to a row over expanding a road in the municipality. As a result, the entire municipality had turned into a dumping site.

In such a situation, youths of Nepal Student Union (NSU) and Nepal Tarun Dal of the NC jointly picked up the garbage from various crossroads of the municipality. It has given some respite to the residents all of whom were struggling to live due to the bad odor coming from the garbage.

Mayor Sah had instructed his employees not to collect garbage from the settlements around the highway following a dispute between him and chief of Divisional Road Office over the road expansion issue.

Locals have condemned the mayor's action stating that he is being irresponsible. Sunil Kumar Mahato, district president of the Confederation of Nepalese Industries, said Mayor Sah is not serious about fulfilling his responsibilities towards the residents.

Mayor Sah had instructed Divisional Road Office Chief Ram Kumar Dev to make roads within the municipality 103 feet wide. However, Dev had refused stating that the law does not permit him to do so. In retaliation, Sah instructed his subordinates to stop garbage collection until the road office cooperated.

KATHMANDU, June 15: In a bid to ensure all political parties' participation in the local level election, the time for... Read More...

KATHMANDU, May 26: Ruling Nepali Congress (NC) has expedited preparations to finalize its candidates for local units in Provinces 1, 2,... Read More...