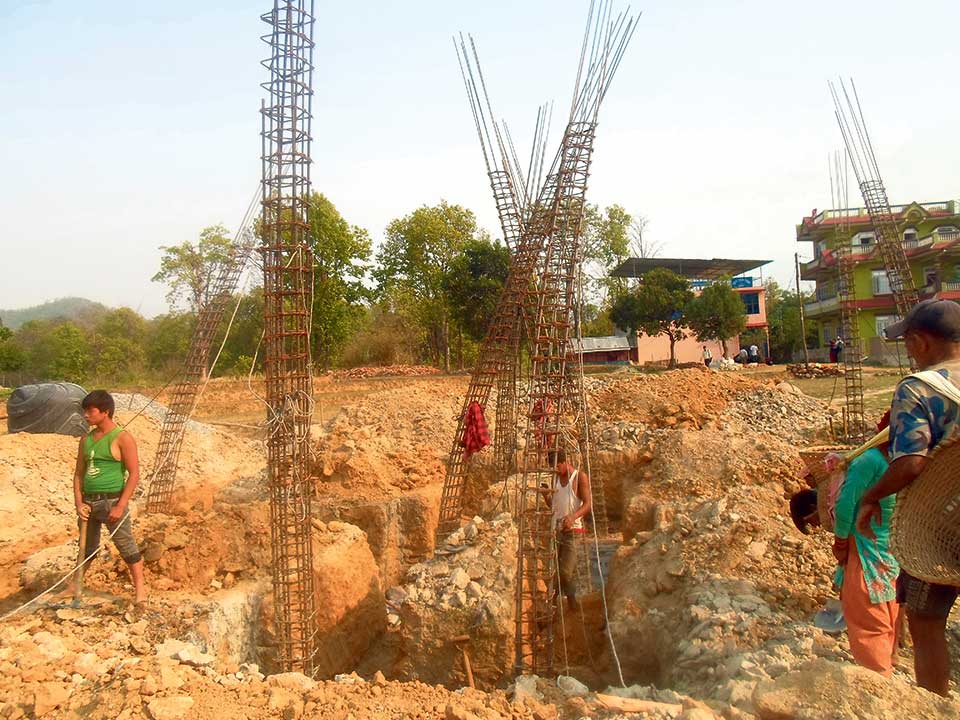 A house being built in Nuwakot district. Locals have complained that construction works have been hit by manpower crunch. Photo: Bhagwati Lama

NUWAKOT, Jan 5: Upendra Adhikari of Chogade village in Nuwakot had started constructing his house right after the Dashain festival. The earthquake victim had gathered materials for the building well in advance. He had planned to get it built within six months. However, so far, not even twenty percent of the work has been over, he laments.

“I had planned it very well and gathered all necessary construction materials on time. The initial work has been done, the base is made,” he said. “But I am so disturbed that I am not able to continue this work any further,” he added.

There is acute lack of workers for construction. It is because huge number of quake victims have been rebuilding their houses. “We have limited labor force. And when the houses are being built everywhere at a time, the labor crunch becomes acute,” Adhikari remarked.

Ram Chandra Mishra has the same headache. His dream to erect a fine house soon has been dashed due to the lack of workers. “I had planned to get into the new house well before winter. But things did not go as planned,” he said. “We don't get people for work. It's really a huge problem,” he added.

According to Mishra, owners like him hardly have technical skills. Even if they want to contribute labor, they cannot do it themselves. “We are eager to build house without any delay, but we are not skilled for it. Without skilled manpower, how can we build it?' he questions.

“They consider my son's house, which is in Itahari, as mine. But that's my son's house. I must be entitled to get the grant here as I am also an earthquake victim,” said Lok Bahadur Adhikari.

Lok Bahadur Adhikari is 69. The local of Dandakeri village also harbors a dream to shift to a warm house before winter ends. However, he is least likely to be so lucky. “I want to leave this cold cottage and start living in a warm house. But the situation is not favorable,” said the septuagenarian.

In his case, lack of construction workers alone is not the problem. He is still struggling to manage money to begin building his house. Since the government found him owning another house in some other place, he has been barred from the list of beneficiaries.
“They consider my son's house, which is in Itahari, as mine. But that's my son's house. I must be entitled to get the grant here as I am also an earthquake victim,” he claimed. He has filled a compliant letter regarding this.

His house was fully destroyed during the earthquake of April 2015. Just like many others, he also waited for the housing grant. But, he has not received anything so far.

Due to some family dispute, Lok Bahadur does not go to his son's house and has urged the government to treat him like a victim and help him live a decent life. “I have seen others building new houses. But I have no money for that. Even if I am given money, it's going to be difficult as there are no workers in the village,” he said.

Absence of construction workers have been felt by everyone. Foreign employment has claimed the workforce of the village, say to locals.

According to engineer Bed Prasad Gaudel, chief of the District Coordination Committee under the National Reconstruction Authority, 3000 people were provided with mason training in the view of the reconstruction in the district.

Synopsis of reconstruction in Nuwakot

A total of 484 community schools were in operation in the district before the devastating earthquake two years ago. None of the school buildings survived the disaster. However, in 32 months, only 40 schools have been rebuilt. The lack of infrastructure has directly hit education of children.

District Education Officer Chandra Bahadur Khadka stated that the reconstruction work is underway. However, it is slow. “Many organizations have taken responsibility of reconstruction of schools, but it has not gained pace,” he said.

Similarly, while over 69,000 families were registered as quake affected families and were entitled to receive housing grant, the slow delivery process of the grant has barred them from getting into new houses. A very few of the victims have been able to manage a new residence on their own.