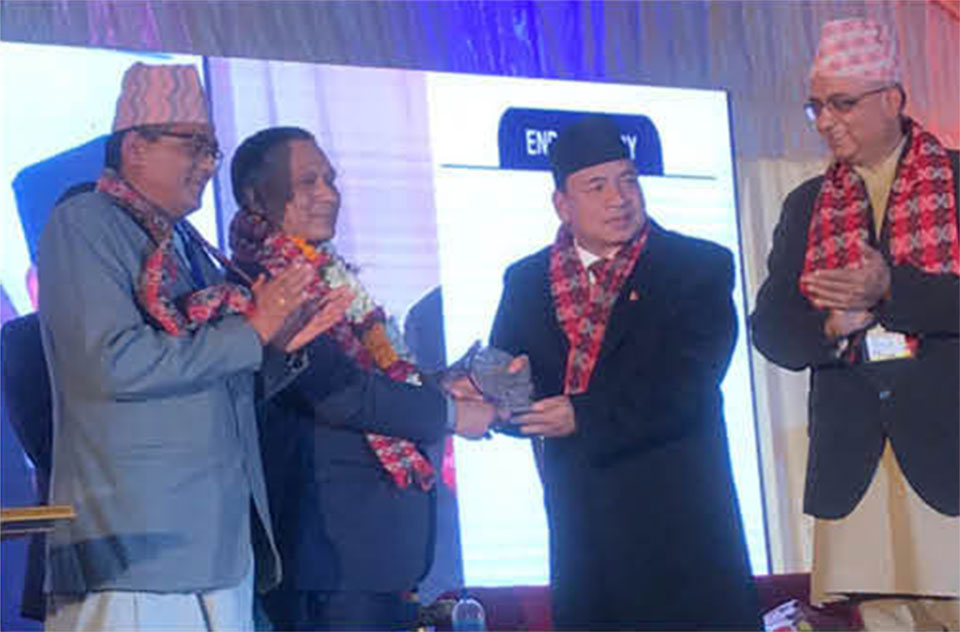 KATHMANDU, Jan 19: Kulman Ghising, Managing Director of Nepal Electricity Authority, has been felicitated for his significant work to resolve the acute power crisis ailing the country for over a decade.

Vice-president Nanda Prasad Pun provided a certificate of appreciation to Ghising in Kathmandu on Friday, amid a function organized at the Himalayan Hydropower Expo, 2019.

Ghising was felicitated on behalf of Independent Power Producers Association of Nepal (IPPAN), who is the organizer of the expo that started at Bhrikutimandap in Kathmandu on Friday.

The electricity shortage ended after Ghising was appointed as the managing director of NEA in August 2016.

When Ghising assumed the post, the NEA was suffering an annual loss of Rs 8.89 billion. Ghising is credited for administrative and financial reforms that overturned the situation for the NEA that started making profits, while the perpetual power cuts across the country ended.

“The government is targeting to produce 15,000 Megawatt (MW) of electricity with the next ten years,” Ghising said on the occasion. “The NEA is working to promote investment environment in the power sector.”

Nepal got rid of load-shedding not only due to Ghising’s sole efforts: Minister Gyawali

Gyawali says there are no legal provisions for reappointing Ghising as NEA’s MD ... Read More...