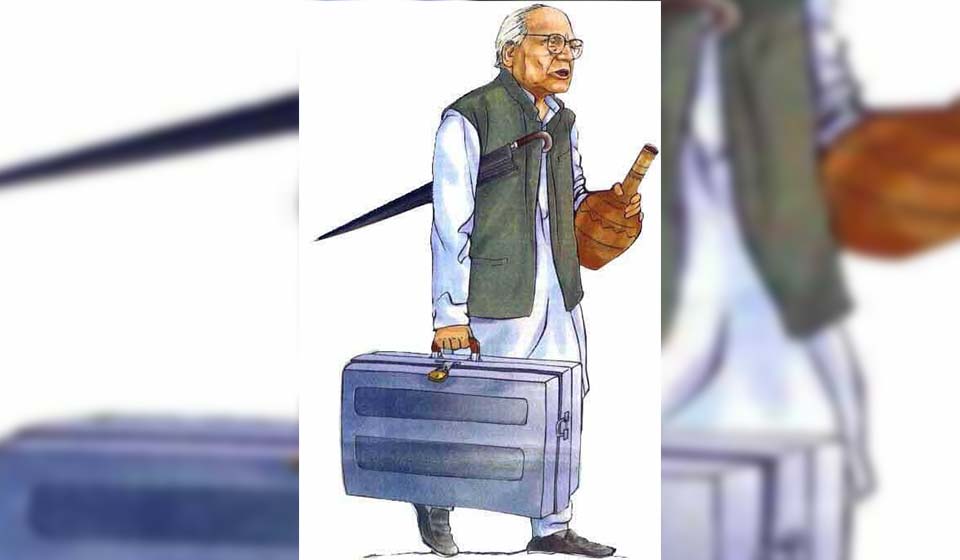 Kishun Ji’s unexpected death left a void in Nepali politics that could never be filled. It is not sufficient to say that he was one of the few main leaders who led the process of transitioning Nepal from an absolute monarchy to a multi-party democracy.

Death doesn’t make an announcement before it comes; it is often sudden and unexpected. This applies to the death of Late Krishna Prasad Bhattarai, former Prime Minister and one of the founders of Nepali Congress (NC), the oldest surviving democratic party of Nepal. Only about a month and a half before his death, while exiting Norvic Hospital after undergoing a weeklong treatment there, he had said, “I am completely fit and fine now. I am not going to die before reaching 100 and before becoming the Prime Minister of this country once again.”

And indeed, a very fit and fine looking and cheerful Bhattarai had returned to the Ashram, the Saint Leader Krishna Prasad Bhattarai Academy, built by the government for him at Bandegaon, Lalitpur. Discharging him from the hospital, senior cardiologist Dr Bharat Rawat, who attended to him at Norvic, had said, “Everything is in order sir. You have fully recuperated.” Not Just Dr Rawat, even Pilot Baba, a renowned Indian swami, who had reached the hospital to take stock of his health, said, “There is nothing to worry now, you have become healthy and are back in shape. Now, nothing will happen to you. There’s a lot more that you still need to do for this country.”

But Bhattarai’s wish to become Nepal’s Prime Minister for a third time couldn’t materialize. Everything was not in order in his body. Pilot Baba’s hope to see Kishun Ji, as Bhattarai was affectionately called, to do a lot more for Nepal, couldn’t be realized. Kishun Ji left this mortal world on 4th of March, 2011, breathing his last on a bed in the Intensive Care Unit of Norvic International Hospital where he had been admitted about a week ago. Just a month and a week after everyone thought he was in the pink of health, Kishun Ji called it quits.

Kishun Ji’s unexpected death left a void in Nepali politics that could never be filled. It is not sufficient to say that he was one of the few main leaders who led the process of transitioning Nepal from an absolute monarchy to a multi-party democracy. He had delivered Nepal’s first democratic constitution – the 1990 Constitution – within six months of heading the Interim Government formed after the restoration of democracy following the first Popular Movement. He commanded a kind of respect none of the present day politicians can even dream of.

About a month before his death, Kshunji’s 87th birthday was celebrated with gusto and full fanfare. This was the first and the last time that his birthday was celebrated in this grand way. Kishunji, who never attached any importance to his personality and private life, surprised his cadres, well-wishers and people close to him by sending them invitations to attend the function organized to mark his 87th birthday.

Accepting his request, hundreds gathered at his Ashram situated in the lap of the Phulchoki hill. His Ashram was jam-packed with people. From the then President Dr Ram Baran Yadav, Prime Minister Madhav Kumar Nepal and a number of former prime ministers of all hues, diplomats, highly-placed government officials, businessmen and industrialists, saints and swamis – in short almost all those in the who’s who list in Kathmandu - and hundreds of commoners, all thronged his residence in the outskirts of the capital to wish him a long life.

Clad in a white and bright Kurta-Pajama and a half-coat made of silk, Kishunji sat on an armchair almost the whole day and received greetings and birthday wishes from the guests. He looked very happy and content. It was not possible for him to talk to everyone but he would welcome them with a gentle smile and a grateful look. However, he would stop those special to him and say, “It was so kind of you to come here. I am highly thankful.”

On the occasion of his 87th birthday, his favourite Swami Pilot Baba also launched his autobiography, Mero Ma. Pilot Baba didn’t speak much about the book or its author but Kishunji made the moment lighter by joking – “This autobiography hasn’t been written well. In fact, it has become a weak autobiography. As my entire life has been a tale of weaknesses, how could this autobiography be different from that?”

Less than a week after his birthday celebration, he fell ill again. His personal physician was called in. After examining him, the doctor said, “He already has a urine infection. Now there is infection in his chest as well. His legs are swollen too. It seems he has problems in his lungs as well. He must be admitted to a hospital.”

He was taken to Norvic International Hospital the very next day. Dr Bharat Rawat who was waiting in the main lobby of the hospital admitted him and ordered a number of tests. He looked very worried after analysing the results of those lab tests. “His condition is very complicated. Let me transfer him to the intensive ward,” said Dr Rawat.

On the 17th day of being admitted to Norvic, his breathing became abnormal all of a sudden. The doctor in the Emergency Ward was called in. By coincidence, Dr Rawat was also there at the hospital. Both came rushing in. After examining Kishunji for almost half an hour, Dr Rawat said in a low, sad voice, “The end is nearing on him.”

Within a few hours of Dr Rawat saying so, Kishunji left this world forever. In its final report on him, the hospital said he had died of multiple organ failure.

It was the second half of the decade of 2030 BS, one of the most difficult times for the banned Nepali Congress party. BP Koirala, the founder and supreme leader of the party and a source of inspiration for the cadres, was bed-ridden because of cancer. The party's acting president, Kishunji, was finding it difficult to carry out his new responsibilities. Nobody knew where the permanent donors of the party had gone. The rent of the party's central office and the remunerations of the office assistants, too, hadn't been paid for several months.

Chaudhary's betrayal was totally unexpected for BP Koirala. He couldn't believe it when Chaudhary left the party and issued a statement supporting the Panchayat regime. That day, he remembered the other party leaders and cadres who were once very close to him but had betrayed him one after another. The faces of Bishwa Bandhu Thapa and Tulsi Giri flashed in his mind.

Thapa and Giri had many things in common. Both were highly ambitious and self-centered. BP Koirala was highly affectionate to both of them. And both had decided at the same time to support King Mahendra who was constantly conspiring against Nepal's first elected government led by BP Koirala.

Besides Thapa and Giri, the face of Surya Prasad Upadhyay, popularly known as Surya Babu, came to BP's mind. Surya Babu, who was among the top four leaders of the Nepali Congress, was well educated and an unmatched administrator. He had been appointed the Inspector General of Schools by the then Rana ruler of Nepal, Padma Shumsher, before the revolution of 2007 BS. He was one of the few central leaders of the Nepali Congress who made sure that the party did not become irrelevant during the chaotic and politically uncertain period from 2007 to 2015 BS and who actively participated in the party's campaign to pressurize King Mahendra to declare a general election in 2015 BS.

In the general elections held in 2015 BS, the Nepali Congress secured a two-thirds majority but two key leaders of the party - Surya Babu and Kishunji - were defeated. BP was shocked by their defeat. He was worried that Nepal's first democratically elected government which he would lead soon would be devoid of these two promising leaders. BP wanted to include them in his Cabinet. So he consulted party president Subarna Shumsher and senior leader Ganeshman Singh. Subarna Shumsher agreed immediately. But he advised BP to make Kishunji the Speaker of the House instead of inducting him in the Cabinet. Singh, on the other hand, was not against Kishunji's appointment but he expressed his reservation against Surya Babu, arguing that he had lost the election from two constituencies. But BP convinced Singh, saying that it was the party which had fought the elections, not any individual.

So, Kishunji was made the Speaker of the House and Surya Babu was inducted in BP's Cabinet as the Home Minister.

(Excerpts from an unpublished biography of Kishunji)

“No improvement in Joshi’s health condition”

It’s a matter of life and death for him, says doctor attending to Joshi ... Read More...