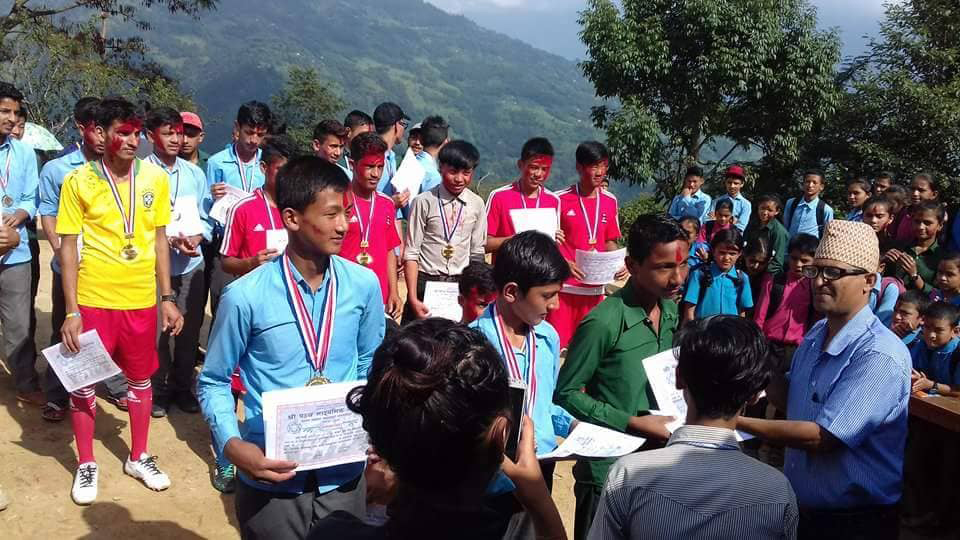 KHOTANG, Sept 24: Pancha Secondary School of Khotang has been selected as the best school in the district in terms of academic results, management and its extra-curricular activities this year also. The school was awarded as the best school along with a cash prize of Rs 500,000 on September 8, coinciding with 29th Education Day. This is the fifth year in a row the school bagged the award. In the past, its students have scored top marks in SLC exams among all public schools and at times, its students have scored top marks in SEE exams among all the schools of the district.

"Our students scored top marks among all the schools in district five years ago. Since then, our students have been consistently performing well in their academics," said the school's Principal, Bhawa Krishna Dhakal. "Our students have performed pretty well in SLC examinations every year. Guardians are very happy with us," he added.

Having the desire to do better is not enough. For it, one has to put in a lot of efforts. Dhakal says that a lot of efforts should be made to improve the education standards of community schools.

Established in 1968, the school has gone through many ups and downs. There was a time when the school really suffered. During the conflict, things were smooth at the school. At other times, the management was not impressive. In the later years, private schools became a huge threat to the existence of community schools including this. However, good thought leadership, commitment and teamwork saved it, the principal asserts.

"It depends on your approach. Community schools can actually manage resources much easily than private ones," Dhakal said. The National Educational Standard Measurement Center had considered several schools for the award. However, the school excelled because of its performance in academics, management and extra-curricular activities that contributed to the overall development of its students.

He also thanked teachers for being sincere and hard working. Similarly, students' participation, zeal and cooperation have been the factors that have been bringing success to the school year after year, he said.

In 2013, the SLC district topper was Binod Dhakal from this school. Last year, several students from the school passed SEE with A grade. Similarly, in the previous year too, the school's students scored impressive grades in SEE.

"Our students believe in hard work, concentration, and sincerity. We don't only preach it, we practice it, so that the students follow us," Dhakal claimed.

While most of the community schools in the districts are losing their students to private ones and few are already on the verge of closure, this school's success is being looked as a huge achievement. According to the school's teachers, poor management has taken a toll on other community schools. Over-handedness of political parties, lack of interest and awareness among parents and similarly, corruption in school has defamed and deformed community schools, they claim.

According to Dhakal, his school has always given high priority to infrastructure. Without sufficient infrastructure, quality cannot be ensured, he shared. Similarly, hiring good teachers and while they impart good education to students, it is also equally important for the school's management to aid in developing the career of the teachers, he said.

"See, in this age of competition, you cannot afford to be lazy. You have to be your level best, if you want to be successful," he said. "A lot of components work in order to make a school successful," he added.

"We do not believe in rote learning. Students have to understand what they are learning," said Dhakal. "For seniors, there are tuition classes available basically for science, mathematics and English subjects. And tuitions for the same subjects are also offered to students from junior grades, if they are performing poorly in those subjects," he added.

The government has envisioned 'education for all' and has invested dearly in education. However, reports state that the overall educational scenario in the country is not satisfactory. Because of the poor performance of community schools, parents are being forced to admit their wards in private schools. However, few community schools like this one have been providing exceptional results.

According to Dhakal, rigorous monitoring of community schools by authorities concerned could change the future of the country. Just spending on education is not enough, the government has to come up with improved policies that have mechanisms for school management and performance monitoring and evaluation.

"We can change the future of the country only if we ensure good education and opportunities through community schools. And strong political will of the government can make it happen," he noted.

SANKHUWASABHA, May 1: The president along with handful of teachers, government workers and few members were able negotiate their way... Read More...