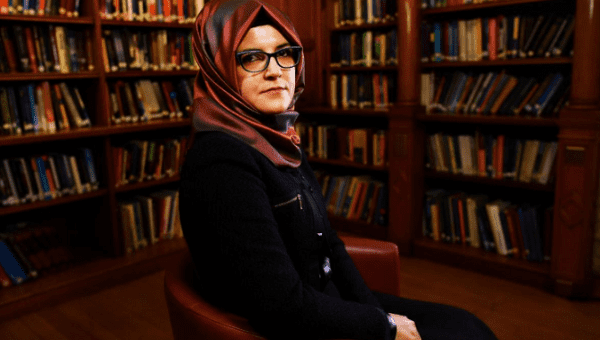 WASHINGTON DC, Oct 31: Hatice Cengiz, the fiancee of murdered journalist Jamal Khashoggi, criticized United States president Donald Trump’s response to his murder Monday and has urged him to set aside trade and economic interest in the search for the trust about his murder. She also called on Saudi Arabia officials in Riyadh to be more transparent and publish more details about is murder and bring the perpetrators to justice.

She also called on Saudi Arabia officials in Riyadh to be more transparent and publish more details about is murder and bring the perpetrators to justice.

“President Trump should help reveal the truth and ensure justice be served. He should not pave the way for a cover-up of my fiancee’s murder. Let’s not let money taint our conscience and compromise our values,” she said during a memorial held for the Washington Post columnist in Westminster, London.

She believes that Saudi Arabia knows where Khashoggi's body is buried and should “answer my demand, for this is not only the demand of a fiancee but a human and Islamic demand.”

In an event hosted by the Middle East Monitor (MEMO) in collaboration with the Al Sharq Forum, Cengiz said: “If only I knew what would happen, I would have entered the consulate myself. If only I knew that would be the last time I would see my Jamal, his smile, hear his laughter, I would have stood in front of that murderous team myself.”

Khashoggi gave his last speech at a MEMO event in September in London. He disappeared after going into the Saudi consulate in Istanbul on October 2. Turkey believes that he was murdered by Saudi officials, which they initially denied. Three weeks after the disappearance, which caused global outrage, a diplomatic scandal and the Saudi stock market to nosedive, the kingdom admitted that Khashoggi had been killed at their consulate in Istanbul, Turkey. They have, however, said the Crown Price had no knowledge of the incident.

Trump has said the Crown Prince, who has consolidated control over Saudi security and intelligence agencies over the past three years, bore ultimate responsibility for the operation that led to Khashoggi’s killing.

At the same time, however, Trump insisted he didn't want to endanger Saudi Arabia's “tremendous order” of $110 billion of weapons, which he says will support 500,000 jobs - figures that experts say are highly inflated.

Cengiz said she had not been contacted by Crown Prince Mohammed or the Saudi royal family, nor have any condolences been offered by them.

“I want justice to be served,” she said. “Not only for those who murdered my beloved Jamal, but for those who organized it and gave the order for it.”

She added: “I want the role of the political leadership in this brutal killing to be brought to light."

“I want justice for Jamal. I call upon the conscience of humanity and the international community – please help us to reveal the truth and hold the perpetrators and their masters to account for their crimes.”

‘A vicious place’: Trump blames ‘the world’ for Khashoggi’s death