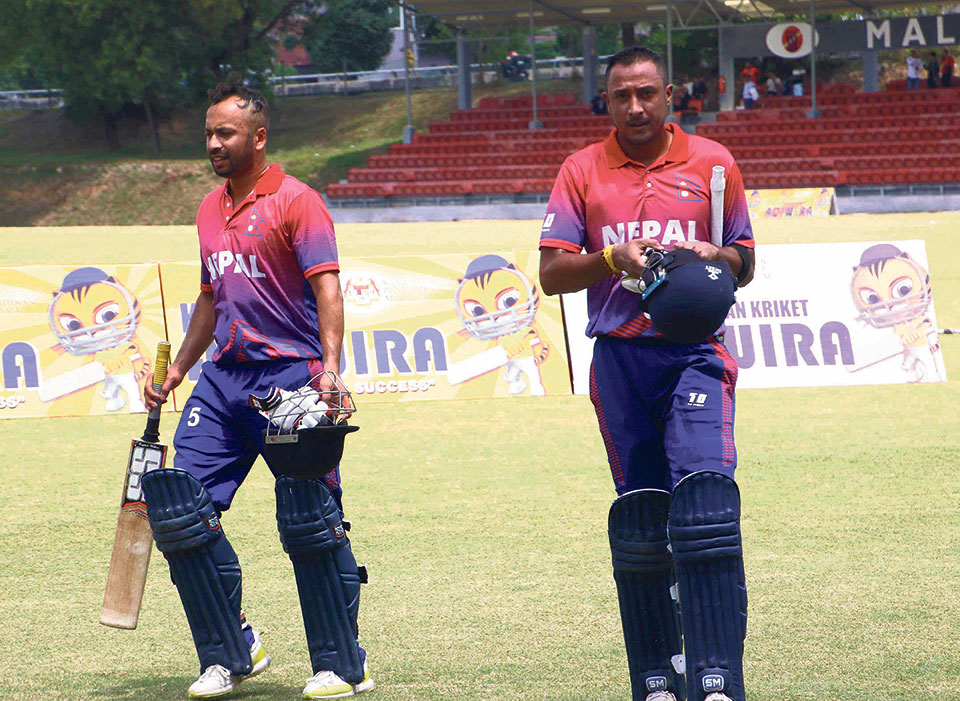 Player of the match Khadka shared an unbeaten partnership of 61 runs with Sharad Vesawkar, who made his return after missing the last tour. Vesawkar remained not out on 16 runs off 20 deliveries as he smashed a six to finish off the match in style.

Khadka scored his second half-century in national colors as he smashed eight fours and five sixes during his 50-ball stay.

At one stage, Nepal was reduced to 68 runs for the loss of three wickets in 11.3 overs. Opening batsman Pradeep Airee made 8 runs from 17 deliveries followed by Vice-captain Gyanendra Malla who struggled his way to 7 runs off 20 deliveries before falling to Anwar Rahman. Same Malaysian bowler also removed Nepal’s U-19 captain Rohit Kumar Paudel for five runs off four deliveries.

Fitri Shaam was the other wicket-taker of the day for Malaysia as Khadka outplayed the bowlers.

Earlier, Malaysia had won the toss and elected to bat first in a pitch which helped batsmen. Opening batsman Virandeep Singh scored 57 runs off 49 deliveries which included seven fours and a six.

Similarly, Malaysia skipper Ahmed Faiz missed his half-century by five runs. He smashed two sixes during his 39-ball stay. Likewise, Sham was the only other two-digit scorer of the innings with 12 runs.

Pace bowler Sompal Kami bowled three overs in the match conceding 15 runs and picking up the wicket of opening batsman Syed Aziz for a duck. A total of four batsmen were dismissed without troubling the scorers.

Nepal is in Malaysia to play couple of T20I matches before heading to Singapore to participate in ICC WT20 Asia Region Finals. The winner of the Asia finals will qualify for ICC T20 World Cup Qualifiers to be held in the United Arab Emirates in October.