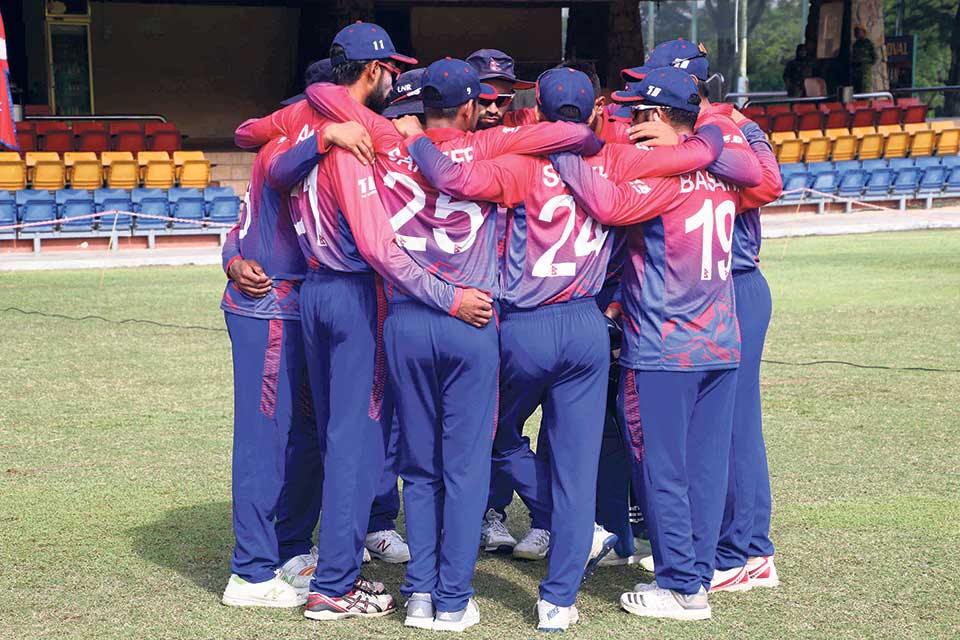 Players of Nepal hurdle before the start of the match against China during the ICC World T20 Asia Region Qualifier B cricket match in Kuala Lumpur, Malaysia on Wednesday. | Photo Courtesy : Raman Shiwakoti

KATHMANDU, Oct 11: Nepal national cricket team completed the lowly target of 27 runs set by affiliate nation China in 11 deliveries completing the record win in T20 international cricket in terms of balls to spare during the fifth match of the ICC World T20 Asia Region Qualifier ‘B’ in Kuala Lumpur, Malaysia on Wednesday.

Nepal won the toss and elected to bowl first before bundling out the neighbor team for paltry 26 runs in 13 overs, the lowest total by any team against Nepal. Left-arm spinner Lalit Rajbanshi, leg-spinner Sandeeep Lamichhane and veteran left-arm spinner Basant Regmi shared three wickets each as seven China batsmen were dismissed without bothering the scorers, which is also a record number of dismissals on duck in same match against Nepal. TIan Sen Qun was the only batsman to get run out whereas opening batsman HJ Yan made 11 runs which was the most in the innings by China. He smashed the only boundary of the innings. Chen Jinfeng and DZ Ma were the only other batsmen to score 1 and 5 runs during the innings. Lalit Bhandari bowled two wicket-less overs in the match.

Wicket-keeper batsman Binod Bhandari made 24 runs off 8 balls including three boundaries and a six to share a partnership of 29 runs with opening batsman Pradeep Airee to complete the chase inside two overs by 10 wickets.

Sandeep Lamichhane was adjudged player of the match for his three-wicket haul. His third in five matches. The spin-starlet has 20 wickets in five matches so far with one more match to go.

In other matches of the day, Thailand won by 31 runs against Myanmar defending the total of 59 runs in a shortened match due to rain. Likewise, Singapore maintained their unbeaten run overcoming Bhutan by 95 runs.

Nepal and Singapore lead the points table on position 1 and 2 respectively winning five out of five matches in the tournament. Both teams will play last match of the qualifier against each other on October 12.

Nepal, along with Singapore, has already secured its berths for the ICC World T20 Asia Qualifier finals slated for the end of 2018 where it will join Kuwait, Qatar and United Arab Emirates, who won the Asia Region Qualifier ‘A’. The top two teams from the final Asian qualifier will join global qualifier league next year.

Teams from different regions of the world and bottom-ranked test teams will play in the global qualifier to secure their place in ICC World T20, Australia, 2020.