Kathmandu is a spiritual center for people of South Asia: Mukherjee 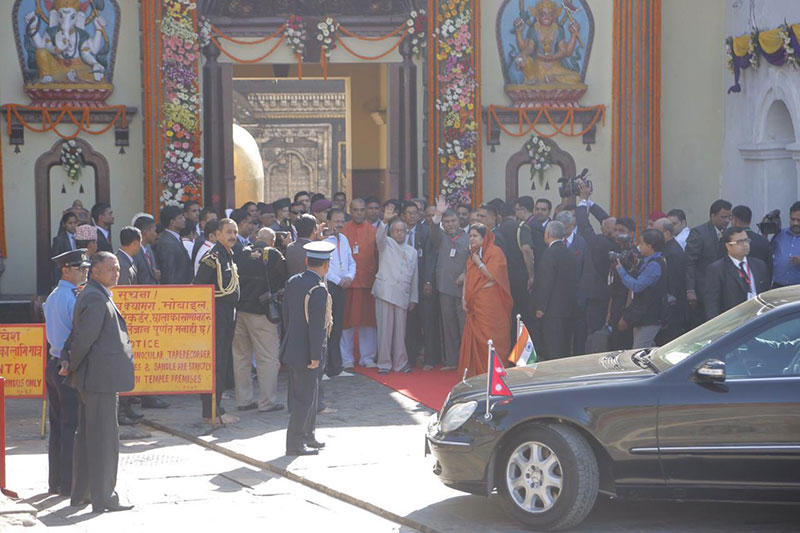 KATHMANDU, Nov 4: Indian President Pranab Mukherjee has described Kathmandu as a spiritual center for the people of South Asian region.

“Kathmandu is not only the political capital of Nepal, but also a spiritual centre for the people in our region,” the Indian president said addressing a civic reception organized in his honor by the Kathmandu Metropolitan City on Thursday. “Thousands of our citizens visit Nepal in search of spiritual solace at the holy temple of Pasupatinath, and Muktinath.”

He noted that monuments in Kathmandu speak of its grand history, the pride and self-confidence of its people and their resilience in the face of adversity.

He also described his visit to Nepal as a kind of pilgrimage. “It is a mission of friendship to foster ever greater understanding and cooperation between our two countries,” he said. “There are no two sovereign nations in the world like India and Nepal, sharing a common culture and having an open border between them.”

The Indian president also stated that India fondly remembered the support that her freedom fighters received from the leaders and people of Nepal during the Indian struggle against foreign rule.

“India attaches the highest priority to its relations with Nepal. That is my main message as I greet the people of Kathmandu today,” said Mukherjee.

During the civic reception function, KMC's chief and executive officer Rudra Singh Tamang honored President Mukherjee with a letter of felicitation on behalf of the people of Kathmandu and presented the key of the metropolitan city as a symbolic gesture to welcome his stay in the capital city.

“We, the people of Kathmandu, feel immensely pleased to have the opportunity to welcome you in this capital city, a city filled with unparalleled scenic beauty, cultural diversity and a treasury of world heritage,” reads the letter signed by Tamang. “We believe that this state visit of Your Excellency would help further develop, strengthen and advance the existing friendly relations between Nepal and India.”

Earlier, President Mukherjee was also conferred on honorary D.Litt (doctor of letters) by Prime Minister Pushpa Kamal Dahal, who is also the chancellor of Kathmandu University, at special convocation function of the university in Kathmandu.

India’s neighborhood policy under Modi is executed with a belief rooted in an intolerant and orthodox view of South Asia... Read More...