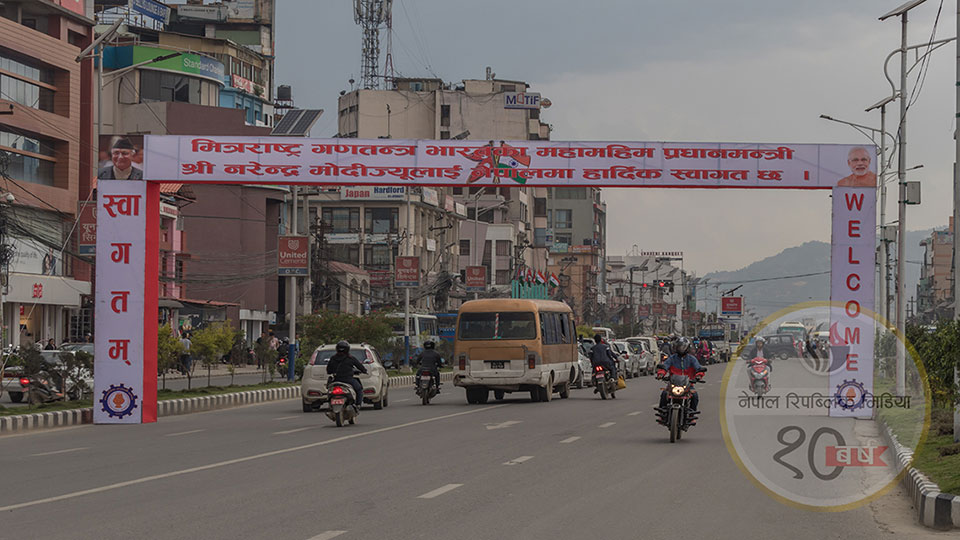 KATHMANDU, May 11: Security has been beefed up in the federal capital in view of the two-day state visit of Narendra Modi,Prime Minister of India.

The Indian Prime Minister who landed in the historic city Janakpur of Province 2 a while ago is scheduled to arrive in Kathmandu in the afternoon today itself.

According to Home Ministry's Spokesperson Ram Krishna Subedi, all three security forces--Nepal Police, Armed Police Force and National Investigation Department--have been mobilized to their full strength for the security purposes.

According to Metropolitan Traffic Police Division, the travel of the Indian Prime Minister here will take place on the shortest route as possible. The route will be cleared off just only 10 minutes before his visit. However, emergency vehicles and ambulances will be allowed to ply at any time.

A less number of vehicles (relatively than normal days) are seen in the roads here since the morning and major places have been cleaned and decorated to welcome the VVIP guest from the southern neighbour. (RSS)

1,954 new COVID-19 cases reported in Nepal on Wednesday
5 hours ago

1,954 new COVID-19 cases reported in Nepal on Wednesday
5 hours ago