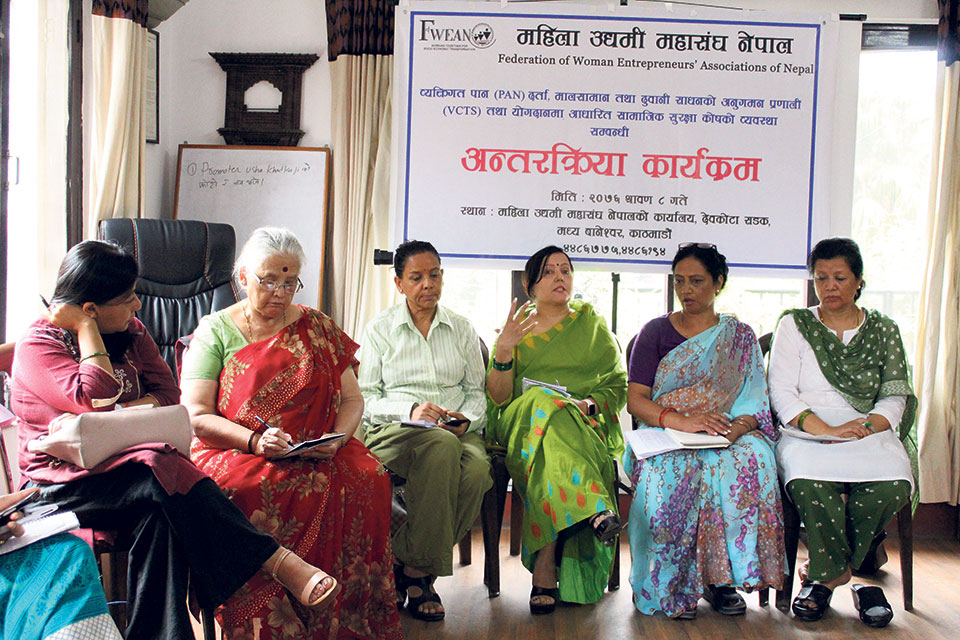 SURKHET, June 3: The government of Karnali Province has decided to use fabric produced by Nepali women entrepreneurs for the uniform of its employees.

Speaking at the 'Roundtable Discussion on Upscaling Women Entrepreneurship Development Funds and Financial Literacy Program' in Surkhet on Monday, provincial government officials say they will make it mandatory to use Allo and Dhaka fiber produced by women entrepreneurs in uniform of government employees.

She also said that the provincial government has set aside Rs 1 billion to promote women entrepreneurship. "We have also announced programs like opening bank account in the name of daughters and providing scholarships to daughters and daughter-n-laws for women empowerment. The province and the country will not be prosperous unless women become financially independent," she added.

Similarly, Minister for Industry, Tourism, Forest and Environment, Karnali Province, Nanda Singh Buda, said that the provincial government has taken the policy of registering enterprises run by women without charging any fee. According to Buda, the province will showcase products of 10 districts in its souvenir house. "We will also help women entrepreneurs to find market for their products," he added.

Also speaking at the event, Shova Gyawali, vice president of Federation of Women Entrepreneurs Association of Nepal (FWEAN), said that the federation was organizing discussion at the provincial level to find solution to problems faced by women entrepreneurs. “The discussion centered on ways to improve access to finance to women entrepreneurs, as well as ease procedure to apply for government subsidies," Gyawali added.

FWEAN has been advocating for upscaling of WEDF from Rs 500,000 to Rs 2.5 million through such programs being organized in all provinces of the country with the support from Center for International Private Enterprise (CIPE).

Ayurveda Medicines in shambles due to sheer negligence of state government

KARNALI, Aug 19: The Birendranagar-based State Ayurveda Pharmacy has come across a shortage of human resource and physical capital due... Read More...