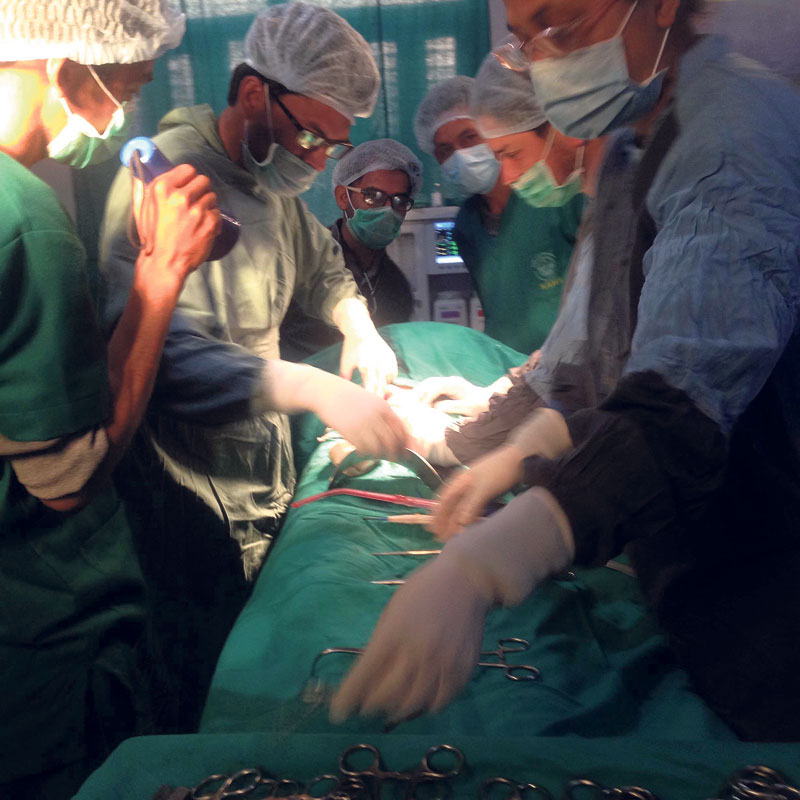 A patient undergoing surgery at the Jumla Hospital of KAHS in this recent picture. (DB Budha/Republica)

JUMLA, Nov 11: Tule Thapa of Malikathata VDC - 6 is full of praise for health facilities provided by the Karnali Academy of Health Sciences (KAHS). Thapa, who had earlier been to Nepalgunj hospital twice for treatment following stomachache, was glad to get good treatment at a hospital in his own district. "Now, we also feel like equal citizens with good health services available just here in Khalanga," he said.

Dilmaya Shahi of Tamti village was also quite happy that she did not have to visit a distant hospital for treatment when her hand fractured recently. To her great amazement, Shahi who had grown up seeing people worried for even minor health facilities, got her hand treated in the Khalanga hospital. "We would go to Surkhet even for small ailments. And that would cost us a lot of money and time.”

People from Shahi's village and other parts of Karnali fly to hospitals in Nepalgunj. Karnali has remained poorest zone in terms of transportation facility for long. In emergencies, patients are rushed to Kathmandu by hiring helicopters.

However, the scenario is changing here. The hospital established in Khalanga four years ago has already done 1,649 surgeries. According to Dr Niresh Thapa Magar, medical director of the hospital, which is popular as Jumla Hospital, 736 of the surgeries were major and the rest were minor.

"So far, we have handled cases of appendicitis, hemiotomy, vasectomy, orthopedic, gyno, hernia and kidney transplant, among others," said Thapa Magar. "Maximum surgeries were conducted for cases of appendicitis. A total of 67 patients were operated for it," he said. KAHS was enacted by the Constituent Assembly in 2007 to provide health services in the backward areas. Hospital services under it kicked off in 2012. Presently it is providing ultrasound, x-ray, surgery, OPD and emergency services, among others.

Even for treating a minor fracture, we had to go to Nepalgunj. Now we get every facility here. We are now getting even advanced medical services in Jumla that we had never imagined of earlier.
--- Haribhadur Bhandari, a resident of Chandannath Municipality

"Since the establishment of the academy, patients from Mugu, Kalikot, Jajarkot, Bajura and other parts of Karnali have come here for medical treatment," said Thapa Magar adding that the patients have been glad with the hospital's services.

Haribhadur Bhandari, a resident of Chandannath Municipality stated that the people of Karnali wont be dying untimely anymore. "Even for minor ailments we needed to spend millions of rupees. Traveling expense would be way above our purse, let alone the urgency to reach hospital. Many would die in lack of treatment," said Bhandari. He added that efficient services provided by the Jumla Hospital have been saving lives. "Even for treating a minor fracture, we had to go to Nepalgunj. Now we get every facility here. We are now getting advanced medical services in Jumla that we had never imagined of earlier," he said.

The hospital stated that its service have been efficient. There is no need for pregnant women to stay in queue nor is there hassle in performing post mortem of dead bodies, said Thapa Magar. "Many women in Jumla and other remote parts of Karnali would die due to lack of emergency health treatment. Child deliveries and other emergency cases would mean high threat to life. But now, we are satisfied that the hospital has come to the rescue.”

Manoj Budathoki Magar, another resident, also shared similar sentiments. He shared that the hospital has been a boon for Karnali residents. "We waited a lot for such health service in our own area. Now, it has come true," he said.

Karnali Zonal Hospital, the only hospital in the district earlier would refer patients to other hospitals for every problem, Manoj Budhathoki said. The 15-bed hospital was later handed over to the Academy. The academy added facilities and expanded its capacity. Presently it has 100 beds. "Earlier in Karnali hospital, doctors and nurses would be hard to spot. The hospital was run by Auxiliary Nurse Midwife and other health staffs. Sometimes, even they would be missing," said Manoj.

Students who study in scholarship at this academy must serve at the hospital for a certain time period. Currently, Leela Devkota, Dharmaraj Regmi, Nabin Timilsinna, Rantabir Nepali and Pujan Rokaya among other doctors have been serving here in different departments. "Our doctors are committed and happy to serve in this remote zone," said Thapa Magar.

Life expectancy of Jumla locals is not more than 36 years. The academy is presently reassessing the situation by conducting its own study. "We are presently surveying 55 thousand families of the Karnali zone. We would have exact picture of its health and life expectancy from this study," said Thapa Magar. There are 11 specialists, nine medical doctors and nurses at the hospital.

KATHMANDU, June 15: HAMS Hospital Private Limited has announced that it will provide free health services to players that have been... Read More...

5,000 applications for driving license to be processed daily
36 minutes ago