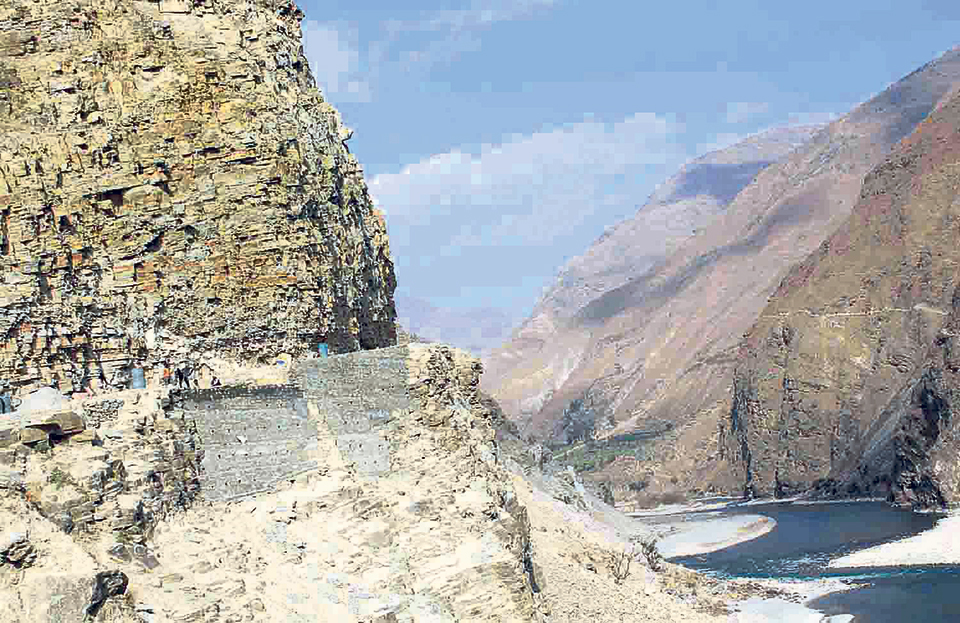 A road track opened as part of the Karnali Corridor by Nepal Army in Silaju Bhir. Photo: Republica

SURKHET, Oct 14: Chief Minister of Karnali Province, Mahendra Bahadur Shahi has stated the deals reached between the Nepal and the Chinese government during the two-day state visit of the Chinese President Xi Jinping, have paved the way for development and prosperity in the country. For Karnali Province, the Jamunaha – Hilsa road development project, which has been upheld by China, is going to change the face of the region, he said.

“Our focus was on developing the road, and we have become successful to draw due attention for it,” said Shahi. “This is going to be the lifeline of our province’s economy. With that, the doorway to development and prosperity is not far,” he added.

Shahi had reached Kathmandu a week before Chinese President Xi’s visit in order to lobby for the project. He held rounds of discussion with Prime Minister KP Sharma Oli for taking him into confidence, sources near to Shahi claimed.

CM Shahi had visited Sichuan province of China in September last year. During the visit he stressed on the importance of the road in connecting Nepal’s two giant neighbors, India and China.

Subsequently both sides had handed over the responsibility to prepare the detailed project report (DPR) to the China Railway Engineering Corporation.

The corporation has already handed over the DPR to the Karnali Province government. It also hinted that that it can complete the project within three years if the project is provided to it.

Citing the latest agreement reached between Nepal and China, CM Shahi expressed hope that the highway would be come into operating within the next three years.

CM Shahi, pitched the road as an express link between India and China. Along with that he said that Jamunah – Hilsa road is essential to connect the province with China and bridging the gap between both neighbors.

Because of its strategic and economic importance, he said that the provincial government had been prioritizing its implementation since the beginning of its tenure.

“This is the most awaited project for the people of Karnali Province. People were very disappointed when the federal government did not include it in the budget,” CM Shahi said. “But its inclusion in the bilateral agreements reached between our both countries has elated locals.”

Last year when PM Oli was in Rara Lake of Mugu to announce Karnali tourism year, he had also highlighted the need to construct the road. But the budget did not cover it later.

“We wanted the road to be designated as a national pride project. But that did not happen,” CM Shahi said. “But now, the Chinese president’s visit and the outcomes have really encouraged us” he added.

CM Shahi is scheduled to leave for Tibet for a week on Sunday. He will be returning back through Hilsa border point. Hilsa border had come into operation last year.

The provincial government is set to open a custom office at the border soon.  The Jamunaha – Hilsa road begins from Jamunaha of Banke. It passes through Surkhet – Dailekh – Kalikot – Bajura - Humla and reaches Hilsa. From Dhuliyabit to Hilsa the road would be 403.52 kilometers long and will have six lanes at some of its sections.

“In market area and along human settlements, the road will be four lanes but its remaining sections will be six lanes,” CM Shahi said. “Once the road comes into operation, Birendranagar – Halsa route can be traveled in just six hours. This is important for the rapid development of Karnali Province,” he added.

Surgical masks run out in medicals

SURKHET, March 6: Surgical masks are not being available to buy in medicals and pharmacies in Birendranagar – the headquarters... Read More...