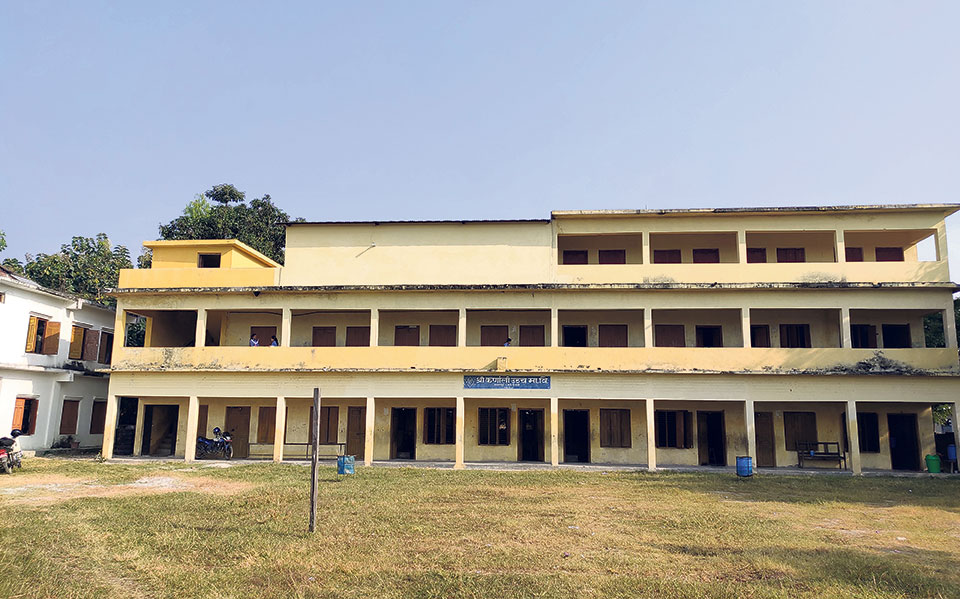 The Karnali Campus in this file photo. Photo: Yogesh Rawal/Republica

TIKAPUR, Nov 23: Karnali Multiple Campus in Tikapur Municipality, Kailali, has been closed due to the lack of students.

In October 2013, the campus started running the Bachelors of Business Studies (BBS) course in affiliation with Tribhuvan University. But now, the campus which was temporarily affiliated with the university, and is situated at Satti of Tilapur Municipality-7, has been closed due to the lack of students.

According to Rabindra Kathayat, the then chief of the campus, a total of only seven students were admitted to the campus in the 2013 batch. “The number of students didn't increase in the following years, either. The campus was running with a few students,” he said, adding that the campus had to stop admitting students from the third year of operation.

Kathayat, who was the chief of the campus, is a lecturer at Tribhuvan High School in Batanpur. He was appointed the chief of Karnali Multiple Campus for a tenure of four years in 2013. He is still looking after the administrative work at the campus where the students are yet to graduate.

Karnali Secondary School had provided infrastructures such as buildings for operating Karnali Multiple Campus. For three years, the campus ran classes in the building of Karnali High School.

“The campus will reopen only if the university permits to run the education stream. We are working to reopen the campus,” he added.

Locals, who were excited after the establishment of the campus in the region, now have to go elsewhere, for example Tikapur, for higher education.

TIKAPUR, Dec 17: Various local units of Kailali are having disputes among themselves regarding extraction of natural resources from rivers... Read More...

Tax avoidance on the rise in Kailali

TIKAPUR, Nov 20: Thousands of individuals and businesses in Kailali district are not paying taxes regularly, according to Inland Revenue Office... Read More...