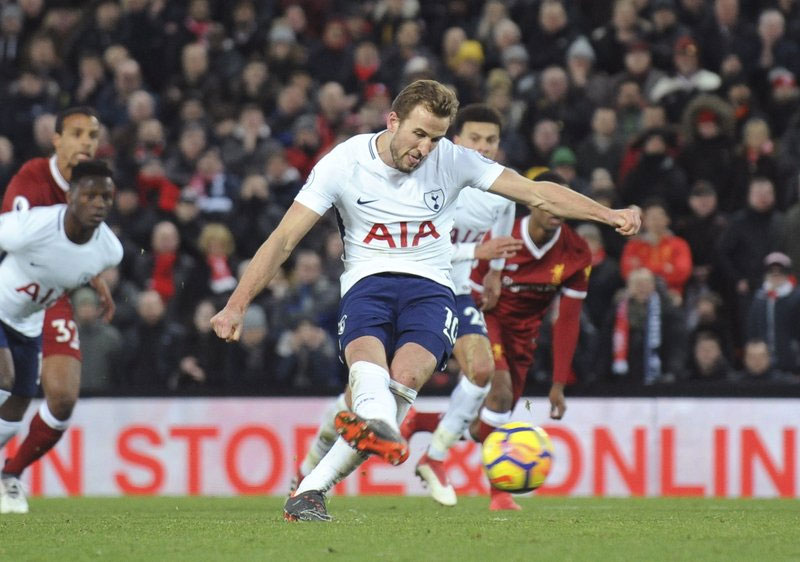 LIVERPOOL, Feb 5: There couldn’t have been a more dramatic way for Harry Kane to bring up 100 goals in the Premier League.

It was the fifth minute of injury time, Liverpool was leading 2-1 in an action-packed game at Anfield, and home fans were seething after Tottenham was awarded a penalty in front of The Kop — courtesy of an intervention by the assistant referee.

Kane already had a spot kick saved in the 87th minute, and was seen looking to the skies in disbelief after Mohamed Salah restored Liverpool’s lead with a stunning individual goal in the first minute of stoppage time.

This was Kane’s chance to make amends. He took it.

The England striker slotted away the penalty with what was virtually the last kick of the game to rescue a 2-2 draw for Tottenham and reach a significant scoring milestone in just 141 games in England’s top division. Only Alan Shearer (124 games) has got there quicker.

“I was nervous,” Kane said. “It was a big moment, with a lot of pressure. But I stuck to the routine.

“It’s great to be in that 100 club now, and it’s great to get something from the game after that roller-coaster of emotions.”

It was a big moment in the race for Champions League qualification, too.

Liverpool could have moved five points clear of fifth-placed Tottenham with 12 games left, but the gap remains only two points. Chelsea is sandwiched between them, while Arsenal, boosted by two high-profile January signings in Pierre-Emerick Aubameyang and Henrikh Mkhitaryan, is four points further back.

It looks set to go down to the wire.

In the other game Sunday, Newcastle moved a point clear of the relegation zone by drawing 1-1 at Crystal Palace.

Kane’s last-gasp penalty overshadowed two of the best goals seen in the Premier League this season. They couldn’t have been more different, either.

Victor Wanyama’s 80th-minute equalizer, which canceled out Salah’s goal in the third minute, was a fierce, first-time drive off his laces that flew into the top corner from 30 meters out. He had only come on as a substitute a minute earlier.

Salah’s second was also a goal of beauty. The forward wriggled past Ben Davies, cut inside from the right, then nipped between two challenges before poking a rising shot past goalkeeper Hugo Lloris.

Salah was briefly level with Kane on 21 goals for the season, only for the Tottenham striker to move back in front after Virgil van Dijk was adjudged to have kicked Erik Lamela. The referee didn’t initially give the penalty, but was persuaded to change his mind by his assistant after a minute of consultation.

“Amazing from both teams,” Tottenham manager Mauricio Pochettino said. “So exciting to watch this type of game.”

Luka Milivojevic converted a 55th-minute penalty to earn Crystal Palace a point from a game it dominated for long spells.

Christian Benteke, who missed great chances in both halves, won the penalty when his jersey was pulled by Newcastle defender Ciaran Clark and Milivojevic scored from the spot for his sixth goal of the season.

The Serbia midfielder became Palace’s joint-top scorer this season in the process.

Mo Diame gave Newcastle the lead when he poked home a finish at the far post in the 23rd after Kenedy’s low, inswinging corner went through a mass of bodies.

With 12 games left, Newcastle is in 16th place but only a point off the relegation zone. Watford in 11th and Huddersfield in 19th are separated by only three points.

Five things we learned in the Premier League this weekend