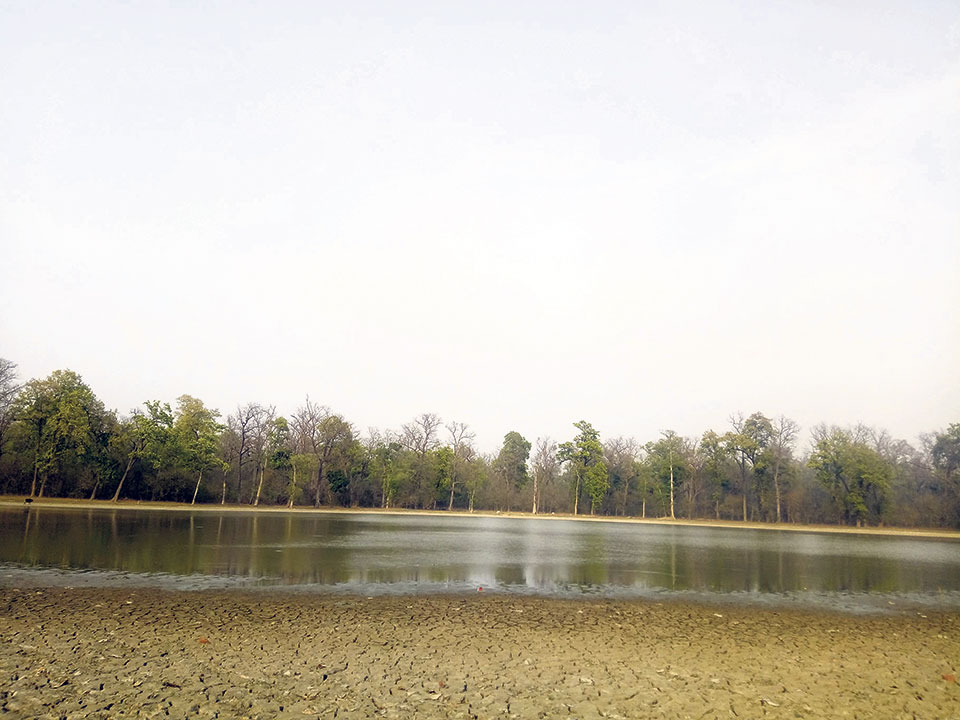 The dried shores of the Soniya lake in Bhajani Municipality, Kailali in this recent picture. Photo: Yogesh Rawal/Republica

TIKAPUR, June 10: Until a few years back, Puraina Lake at Bhajani Municipality would offer a mesmerizing view. Cranes and many other species of birds would flock to this lake and enjoy its water and the surrounding flora. However, this lake that spread in 66 hectors of land is now a paddy field. After its water gradually dried up, its inhabitant, which included cranes, species of bird that sits on protected birds list, also disappeared. After the lake slowly disappeared, some residents near the lake started to cultivating its land.

According to local conservationist Bijayaraj Shrestha, there are many reasons behind rapid disappearance and shrinking of natural lakes and one of the primary reasons, he says is fish farming.

“Among the many reasons behind the gradual disappearance of lakes around here is fish farming. Natural lakes came under attack after fish farming flourished,” he said.

Another conservationist Bhojraj Dhungana blames unplanned urbanization in Tikapur. People are building houses and other infrastructures without considering its impact on the environment, he said.

“Lakes are disappearing before our eyes; even other natural resources are being destroyed rapidly. Urbanization might be the need of the people, but it should be sensible and responsible,” he said. “If we fail to protect trees, lakes, and rivers, the consequences will be dire,” he added.

He stated that Ojuwa Lake, which is considered as a wetland and is home to many species of animals and birds, is also gradually disappearing. “Such an important wetland is disappearing due to human encroachment. Considering the pace at which it is being infringed, it might cease to exist in the next few years,” he said.

Ornithologist Hem Sagar Baral expressed concerns with the pace at which humans are destroying the ecosystem. He says that the impact of such encroachments is already beyond repair. Survival of many animals and birds found in the wetlands, rivers and lakes are under threat while some have disappeared from the area, he claimed.

Dhungana agrees to this. Until a few years ago, lakes in Kailali were filled with water, he said. “Now, the water level has gone down. Even in terms of the area they occupied, they are rapidly shrinking. There are many lakes which have ceased to exist totally. Nowadays they have been converted into farms or playgrounds for children,” he noted.

Along with human encroachment and human-induced conditions, floods have also been aiding in the gradual decline of lake areas. Dhungana said that many lakes in the district had been a victim to flood and silt.

“Both the lack of conservation and floods have taken a severe toll on some of the lakes. Earlier, when we were young, floods were not this rampant. They were somewhat predictable. These days, climate change and natural calamities have become worse, “he said.

Ghogaghodi Lake, spread over 138 hectors of land is the largest lake in the district. There are 19 big and small lakes around it which expands the area to a total of 248 hectors. And these lakes are also under threat. Residents believe their size has also shrunk over the years, though no official measurement has been done to corroborate such claims.

They claim that destruction of the Chure region has also contributed to the depletion of the lakes in the district. Since natural sources of water in the Chure dried up, lakes in Kailali have been deprived of water too.

Narahari Rijal, president of Bagdauli Irrigation Project, stated that the drying of natural water sources has a multidimensional impact on the environment. If lakes or water sources in one area dry up, it directly or indirectly affects the other areas as well, he said. “Lakes here were dependent on certain water sources in other areas. As those water sources dried, the level of water in lakes here also depleted,” he stated.

Drying up of lakes and other water sources have left farmers also high and dry. They have run out of irrigation facilities.

Ghodaghodi Lake was the most significant source of water for farmers in the area. They have long used its water for irrigation. But since the level of water in the lake is gradually declining, they are worried about the future.

Dayaram Chaudhari, a conservationist, called on of serious efforts to conserve the lakes and the flora and faunas around. He called on the government and stakeholders to implement short term and long term interventions to preserve natural water sources.

“Farmers are anxious that the lakes and other natural water sources around them are drying up rapidly. It poses a direct threat to farmers’ livelihood, among others,” he said. “It is the duty of all stakeholders and the government to do the needful to save the nature,” he said.

There were a total of 187 lakes in Kailali until a decade ago. Fresh data on how many of them exist now is not available.

DHAKA, Sept 14: Pouring rain coupled with animal sacrifices all over the city have created a strange and disturbing scene. ... Read More...