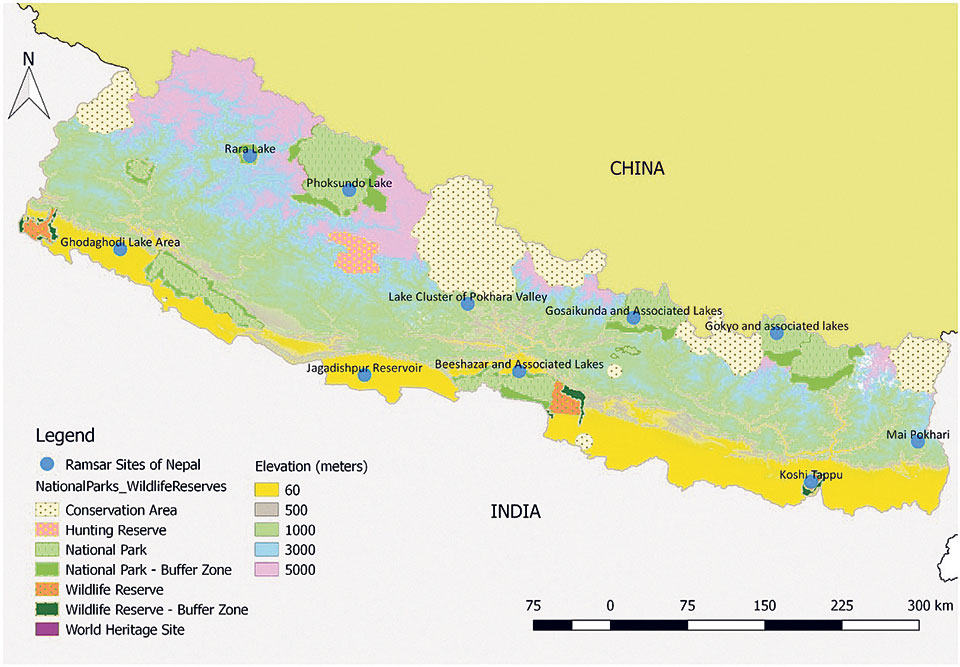 KATHMANDU, Nov 17: Wetlands cover around 6 percent of Nepal's surface area and more than 21 ethnic communities rely on these for their livelihood. They are also a lifeline for the ecosystem. However, there are no proper laws and regulations to manage them.

A national policy concerning measures for wetlands protection is seven years old and does not conform to the federal structure. Conservation enthusiasts are concerned over the government's silence over wetlands management and any measures to halt their shrinkage and degradation. The wetlands include rivers, lakes, swampy rice fields, ponds and waterlogged areas.

“Wetlands are a most neglected issue in federal Nepal. We are worried by the silence on the part of the central government over legal measures required for conserving this most productive ecosystem,” said Top B Khatri, a conservationist and former chief of a UNDP-supported project on the conservation and sustainable use of wetlands in Nepal.

According to the National Biodiversity Strategy and Action Plan (NBSAP)-2014, the wetlands have shrunk by 5.41 percent due to expansion of croplands. Major drivers of wetland degradation include lack of clarity over policies and management responsibilities, inadequate technical, financial and institutional capacities, and population growth and the increasing demand for resources.

Other proximate drivers, according to NBSAP, are encroachments in the form of drainage, agriculture, human settlement and infrastructure development, extraction and diversion of water for irrigation, invasion of alien species, siltation, over-harvesting of resources including commercial fishery, and changes in land use, especially agricultural lands and urban expansion.

An estimated 750,000 hectares of wetlands exist in Nepal. Studies show that over 85 percent of Nepal's agrarian communities rely on wetland resources for food, fodder fiber, folk medicine, navigation and fishing, according to the National Ramsar Strategy and Action Plan (NRSAP). And the 21 ethnic communities that are traditionally dependent on wetland resources account over 17 percent of the country's total population.

“They are a food basket and means for income generation for many marginal and indigenous communities such as Majhi and Jalahari (fishermen), Jhagad, Tharu, and Mallah in Nepal,” says Shailendra Pokharel, a conservationist who has worked for more than 10 years on wetland issues.

In terms of species diversity, Nepal's wetlands contain many threatened and endangered flora and fauna and provide excellent ecological habitats for internationally important winter migratory birds and other wildlife, according to NRSAP. They are home to at least 230 indigenous fish species and these have high economic, environmental and academic value. Also, 27 percent of nationally threatened bird species, 85 percent of endemic vertebrates and about 24 percent of government-protected plants have been recorded in the wetlands.

Nepal ranks 25th in global biodiversity richness although it has only 0.1 percent of the global geographical area. According to the Ministry of Forest and Environment (MoFE), Nepal has 3.2 percent of the world's known flora and 1.1 percent of fauna.

Experts say that the wetlands hold special significance in all major religions and cultures of Nepal as water bodies are considered sacred . Ponds, lakes and rivers are a focus of Mithila culture and its Chhath festival during which offerings of water to the sun take place.

Conservationists see a need for a separate institution to manage wetlands, something which is now done by different ministries.

MoFE is the focal ministry for wetlands and its Department of National Parks and Wildlife Conservation (DNPWC) is the Ramsar administration authority in Nepal. However, the department is limited to the protected areas only. Issues related to fishery, irrigation, energy, drinking water and agriculture are beyond its brief.

“Wetlands are like an orphan within the ministry,” says Dr. Bishnu Bhandari, who has researched and authored a book on wetlands in Nepal and their socio-cultural importance.

"There is an urgent need to formulate an umbrella Wetland Act & Regulations," says Khatri, the conservationist, adding, "It needs to be integrated with existing Acts related to forests, national parks, wildlife conservation and environmental protection ." Also, the provincial and local governments need to formulate their own wetland conservation strategies, he added. He emphasized the need for a comprehensive inventory of wetlands to come up with the exact coverage. Wetlands conservationist Pokharel calls for a national institution for the purpose. There is a need for a dedicated national institution backed by a legal instrument, he says, adding that such an instrument would not become functional until it is governed by a dedicated institution.

Government officials concede that increased collaboration is needed to protect the wetlands.

The Constitution envisions a safe and clean environment as a fundamental right of citizens. Its Annex 5 on state policy directives provides special focus on natural resource management and wetlands of international importance. It considered this a subject matter for the federal government. However, the Local Government Operations Act 2074 BS clearly empowers local governments to carry out activities for protecting and safeguarding wetlands.

However, Join-secretary Dhakal is more optimistic. “We have come a long way and our efforts are praised by the international community,” he said.

An older version of wetland policy was updated 10 years later in 2012 to address new challenges including climate change. In 2018, the government unveiled a national Ramsar Strategy and Action Plan (2018-2024), which includes a aamsar strategic plan. Officials argued that the plan is congruent with both the Sustainable Development Goals and the Aichi Biodiversity Targets (2011-2020).

Wetland experts are not impressed. “Unless you have a dedicated law to manage wetlands, mere argument and action plans would be futile,” says Pokharel, who emphasizes strengthening wetlands governance from the local up to provincial and federal levels.

He said the total coverage of wetlands is over 8 percent when rivers, catchments, paddy fields and other water bodies are counted.

Nepal has been a party to the Ramsar Convention on wetlands since 1989, and there are 10 globally important Ramsar sites in Nepal.

Mai Pokhari of Ilam and the lake clusters of Pokhara are the wetlands in the mid-hills. The remaining four wetlands are in the terai: KoshiTappu Wildlife Reserve, GhodaghodiTaal in Kailali, BishajariTaal in Chitwan, and Jagdishpur Reservoir in Kapilvastu.

World Wetland Day (WWD) was celebrated on February 2 this year. This marks the day of signing the first environmental... Read More...

Houses in earlier times were made from wood and soil that were susceptible to fire. In case of fire, water reserve... Read More...