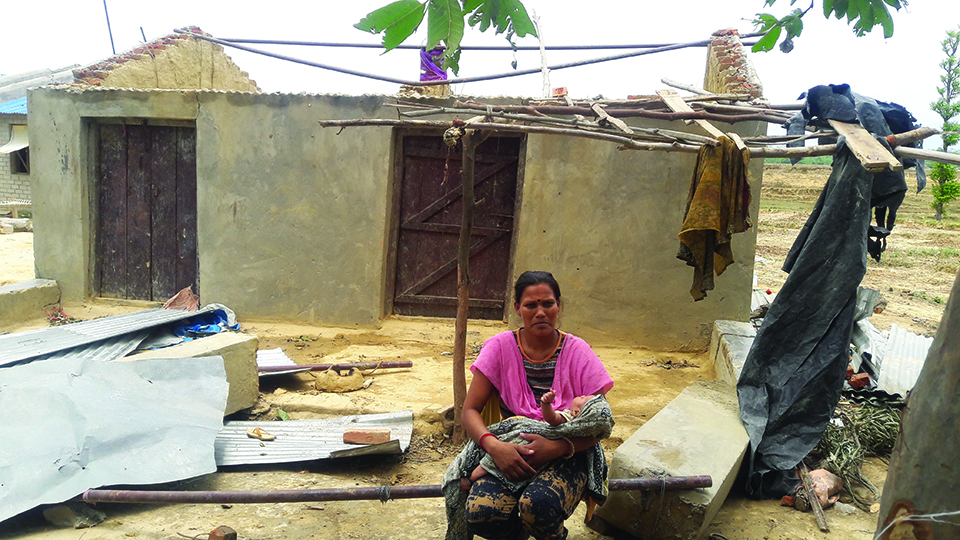 Republica A mother sits in front of her house that was destroyed by storm recently in Dhangadi, Kailali on Wednesday.

DHANGADI, June 13: Kalpana Nepali of Dhangadi Sub metropolis – 12 is spending her days under a tree shed these days. At night the mother of three takes shelter in a neighbor's house. After her home in Jugeda village was damaged by powerful storms on Thursday night, the family became homeless.

"My husband had left for foreign employment just two days before the storm destroyed our home and rendered us homeless," she lamented. "Along with the house, we have lost crops, clothes, and other belongings."

Locals are accusing the federal government of bias towards them. Stating that it had responded immediately to a similar storm in Bara and Parsa districts with all its might, they claimed that it is yet to extend aid to them even after a week.

Since then, the mother and babies have not gotten enough food or sleep. The youngest one is just two months old, and he cries all the time while the elder two go around in search of food. "I am quite worried, and we lost shelter and everything."

Another local of Dhangadi, Dhanadevi Dholi has no better situation. She is also a mother of three, and her youngest one is now eight months old. "After the storms damaged our house, we have been living on the road under the open sky," she lamented.

Schools in Kailali and Kanchanpur have not become able to operate smoothly post-disaster. While school infrastructures have also suffered damages, children from affected families have not come back to school yet.

"We don't have books, notebooks. The storm blew away everything," said Naisa Nepali, a third grader at Sharada Secondary School, Dhangadi. "Our house is fully damaged, and we are not in a situation to resume school."

Parbati Nepali, also a third grader at the same school stated that children had lost school dress, stationeries, so they cannot go to school.

Power cut has also primarily affected people's lives in the west. According to the regional office of NEA, 1500 electricity poles and 20 transformers have to be either repaired or replaced.

"Even in one week, the power supply has not been restored. It is so hot here, we cannot sleep inside at night," said Manisha BK of Dhangadi.

Regional Chief of NEA Satish Kumar Karna meanwhile said that electricity supply has been restored in some areas and added that it might take a few more days for the electricity to be restored in the remaining areas. "It might take a week to restore power supply in all the areas," he said.

6000 houses damaged in Dhangadi only

According to Nrip Bahadur Od, Mayor of Dhangadi Sub-Metropolitan City, storms have damaged 6,000 houses in the sub-metropolis only. Even though ward chairpersons, members or local representatives have been making efforts to bring the life of the people back to normalcy, there are facing resource crunch, he said. "We are looking forward to an adequate response from the provincial and federal government. There has been a huge loss, and we are not able to fix things on our own," he said.

He stated relief, as well as resettlement, needs a considerable budget and proper planning, which the local government alone cannot ensure. "Local representatives are doing their best for providing immediate relief and comfort to the victims. But for resettlement and reconstruction, I have requested intervention from the provincial and federal government," he said.

Locals remark that 'the west continues to be neglected by all.' The federal government is indifferent towards the people's grievances. While it had responded instantly when a storm hit bara and Parsa districts, it is yet to respond in their case, they said. "Although causalities were not much here, the effect has not been any less. In the east, they paid a visit, all state mechanisms were used to fix things, and here, nobody seems bothered," said Surat Rawat, a local of Dhangadi. "Neither the federal government nor the provincial government is really sensitive towards the problems we are facing," he added.

19 yrs on, freed Kamaiyas still wait for own land