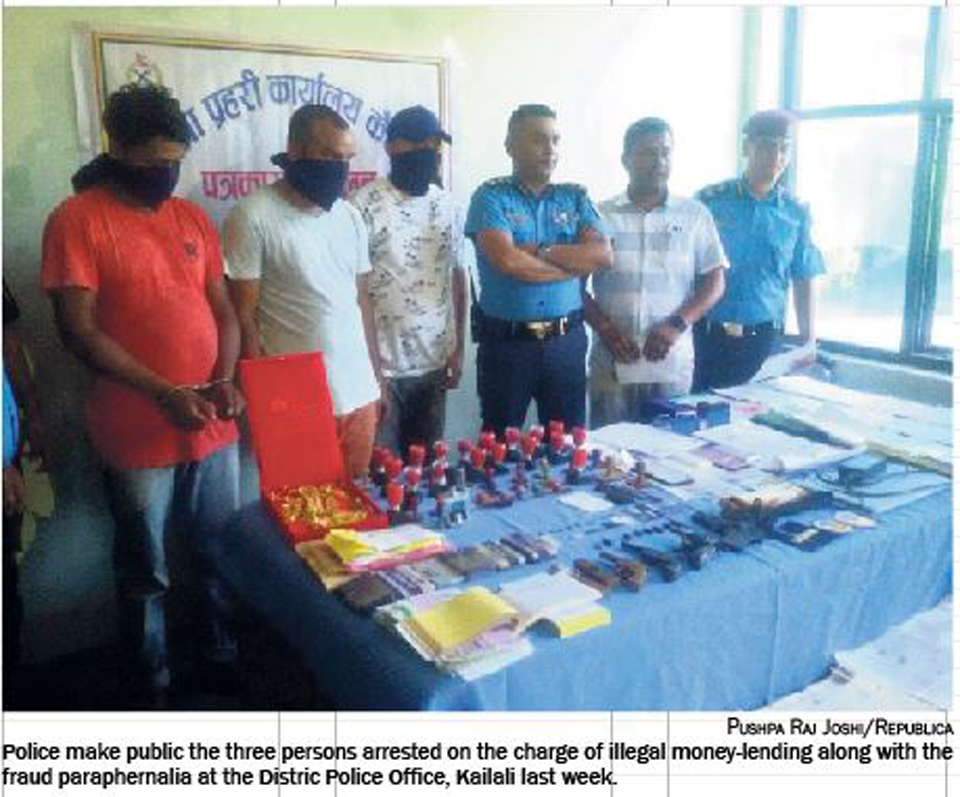 DHANGADHI, Sept 10: Police in Kailali have arrested three people for their alleged involvement in illegal money-lending in a case that officials believe could help them explain several incidents of bankruptcy and suicides that rocked Dhangadhi in recent years.

Responding to a complaint from one Bindeshwar Shrestha, a team of police on Wednesday arrested Sanjaya Rana, 38, and Rudra Prasad Adhikari and Kamal Bahadur BK on the charge of defrauding Rs 95 million.

During the arrest, police had seized pistols, 19 bank checks issued in the name of various individuals involving transactions worth Rs 24.5 million, 23 copies of loan documents worth Rs 180.3 million, and fake documents and stamps of various government offices.

In his complaint, Shrestha has accused Rana of defrauding him of Rs 95 million. “Our investigation found that Rana had transferred Shrestha's property to his name by using forged documents and stamps,'' said Superintendent of Police Sudip Giri.

Officials said that they were investigating the case also for possible organized fraud and illegal money-lending.

The arrest comes amid reported rise in the number of people falling prey to debt trap of loan sharks.

Exact figures are hard to come by but unofficial estimates show that the number of people victimized by loan sharks could be in hundreds.

“The massive network of loan sharks and fraudsters has resulted in dangerous situations in which many people have turned homeless while some have been forced to commit suicide. Such cases are on the rise because the police administration is not taking required action,'' said Hemraj Panta, professor of Kailali Multiple Campus.

Khadgaraj Joshi, regional coordinator of Insec, an NGO working in the human rights sector, said that illegal money-lending has emerged as a big problem.

He claimed that high-interest loans were behind eight recent cases of suicide.

Locals suspect that high-interest loans were behind the bankruptcy and eventual displacement of Manish Sharma and his family from Dhangadhi and suicide of a local youth named Khem Rana.

Pramod Pathak, a civil society member, said that very few complaints of illegal money-lending reach the police due to a powerful nexus between loan sharks and local politicians and officials.

“They seldom get arrested because of their special connections with the political parties,” said Pathak.

A report by the Amnesty International shows that Nepalis are being forced to take loans by paying up to 60 percent interest per annum due to lack of options.

Last month, it was revealed that a notorious money-lender in Sarlahi had left as many as 300 people homeless by using forged documents.

Why this neglect for Kailali?

It’s over two weeks since the windstorm that struck at a speed of 95 kilometers per hour and lasted nearly... Read More...

Is the delta variant of the coronavirus worse for kids?
52 minutes ago