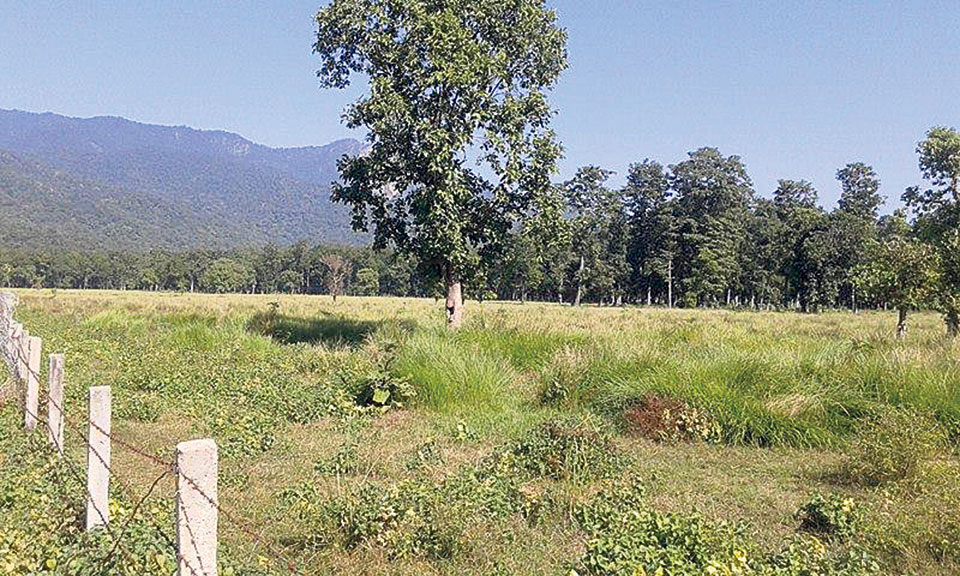 The proposed site for an industrial park in Dudejhari grasslands if Kailali district. Photo: Yogesh Rawal/Republica

TIKAPUR, July 11: Work on a proposed industrial estate in Dudejhari in Lumki Chuha Municipality Ward 3 has not gained momentum even though it has already been four years since the project was first mooted.

Locals of the area are desperately waiting for the project to begin. Though the project features in the budget of the government, nothing is being done on the field. The delay in building the project has saddened local industrialists who were excited at the prospects of the industrial estate in their area.

Industrial District Management Limited (IDML) -- the government agency overseeing development and management of industrial estates -- has already completed Environment Impact Assessment (EIA) of the area selected for the project. But the report EIA report has been gathering dust at the Ministry of Forest and Environment for more than a year. A source at the ministry says that no action has been taken on the EIA report, stating that the proposed area falls in wildlife corridor. Because of the ministry's indecisiveness, field work at the project site has not begun.

The board of directors of IDML has already forwarded the DPR of the proposed industrial park to the cabinet for approval, according to Bhojraj Binadi, the information officer for the IDML.

It has been learnt that the IDML forwarded the project's DPR to the cabinet seven months ago. Similarly, a source at the cabinet says the council of ministers cannot approve the DPR without studying EIA report of the project.

Jhapat Bahadur Rawal, a member of parliament from Kailali, said the cabinet was preparing to announce the proposed are as an industrial estate. "The EIA report will not impact announcement of the industrial estate by the cabinet," Rawal said, adding: "The process is getting delayed as some issues are still to be sorted out by the Ministry of Forest and Environment."

Rawal also said that the project will not face resources crunch. "The government has allocated sufficient budget for the project. Work at the project site will begin once the area is formally announced as in industrial estate by the cabinet," he added.

The DPR and EIA report of the project was prepared by Grid Consultancy.

The IDML invited 'Letter of Intent' from industrialists interested to set up their plants at the industrial estate about a year ago. Responding to the notice, many industrialists have already submitted their proposals to the IDML.

The IDML has handed over the responsibility of overseeing the proposed site to Nepalgunj Industrial Area Management Office.

Govt, ASDP and NACCFL sign deal for capacity buildings of cooperatives in Karnali
48 minutes ago