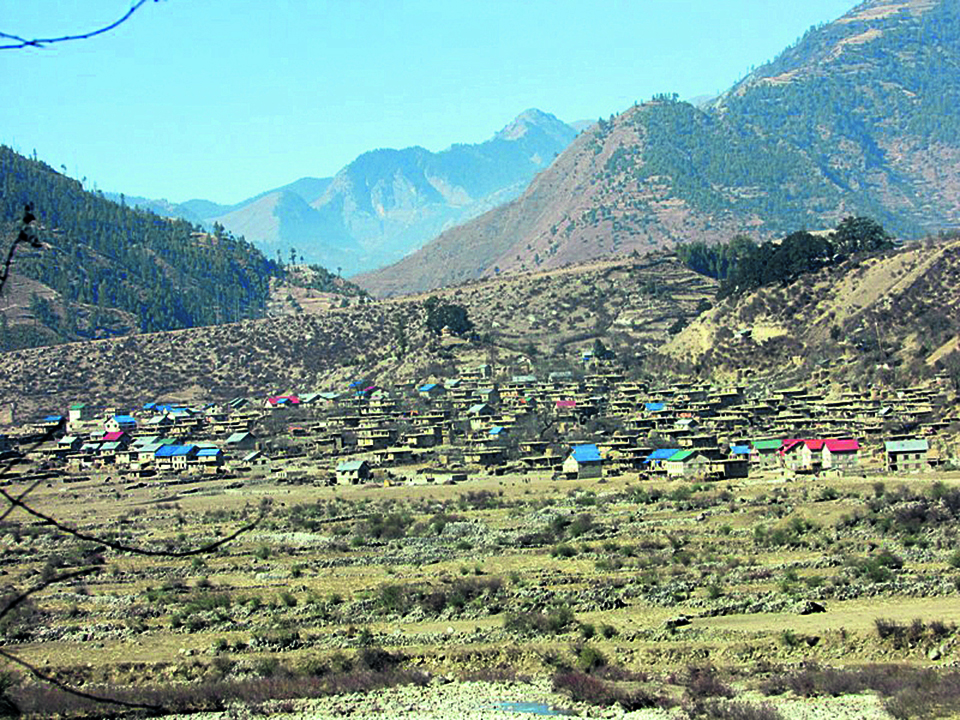 Republica Talfi village of Patarasi Rural Municipality is seen in this recent photo.

JUMLA, Jan 22: Residents of the Patarasi Rural Municipality in Jumla feel that their rural municipality is heading towards prosperity. Madikrishna Budha narrates his own story to ascertain the feeling. Until a decade ago, he would go to Kalapahad in India, to earn for the family. Even after shedding blood and sweat in the foreign land, he would not be able to save much.

His yearly earnings would only suffice for purchasing ration and a few pairs of new clothes for the family members back home. Life was synonyms to poverty. He never hoped in those days that his family would be able to escape the cruel poverty that ruled the family’s fate.

That is now history. He does not consider himself as a poor man. His family earns well and the income has been steadily growing over the years. “I used to walk across the Kalapahad and work in India for months only to return home with little money. Staying away from home is not an easy job. Whenever you fall sick and need help, there is no on to take care of you,” he said, walking back the memory lane.

“I have seen very hard days. Now with God's grace, everything is going pretty well. My family is no more. We have been able to lead a decent life, right here at our home,” he added.

One of the biggest sources of his earning is collecting yarsha. This is an annual engagement. Every year during the yarsha collection season, he packs up his baggage and heads for the higher mountains. The competition among yarsha collectors has been increasing steadily. Yet, he makes few thousands easily. “I sell the herbs to buyers on the spot and return home with some good earnings,” he said.

Apart from that, he grows and sells season and off-season vegetables and crops. His agricultural skills and connection with the market actually developed just recently. “I did not know we could earn even through our own farms. Earlier, we would not farm vegetables or crops, as we do nowadays,” he said.

It is not only Budha’s family, whose income has increased in the recent years. Most of the villagers have been benefiting from yarsha collection and have embraced commercial vegetable farming.

He said they did consider the monetary value of vegetables in the past and therefore did not focus on its farming. “We had no clue that we could farm vegetables and crops that are suitable for the soil here and sell that off in the market. We used to think that we were poor and have no resources to earn a living. We were wrong,” he stated.

Dhansur Airi, 61, puts it even more candidly. He goes on to declare that ‘the hard days of the people of Jumla are gone’. “In our days, we had to work very hard and despite that we would not have enough to eat, clothes to wear,” he narrated. “But now we have money as we have means to earn it at home.”

Airi reported that commercial farming of crops, fruits and vegetables have proved as a boon to them. Herbs, potato, beans and apples have brought prosperity to Jumla villages, he asserted.

“Our boys now do not have to go to India or elsewhere in search of a job. They don’t have to go through the ordeals that we went through. They can stay at home, cultivate vegetables and crops and earn a living for their family,” he said.

Patarasi is the tallest mountain the district. Snow lies over the mountain throughout the year. It is another source of income for the residents as tourists frequent the mountain for its now.

“In those days, tourists would not visit here. We had no idea that tourism could boost the economy. But our children are smart. They work as a guide, they trek with tourists and make good money from it,” Airi further said. The mountain is frequented by domestic and international tourists alike.

Apart from these, widening road networks and awareness among people have been making Jumla a happening place, he said. Karnali Library established by late Dor Bahadur Bista has let people feel proud of it. They also take pride in their love for sports, athletics. Airi stated that people keep cattle at home, take good care of the animals and themselves amid growing prosperity.

Locals credit NGOs for the new changes. What NGOs did, according to them, are teaching life skills. “Their support was small but that turned out to be great for the people here,” he said. Ama Samuha and youths’ groups are also a major strength of the society. Locals believe that Jumla will take a leap in development in the days to come.