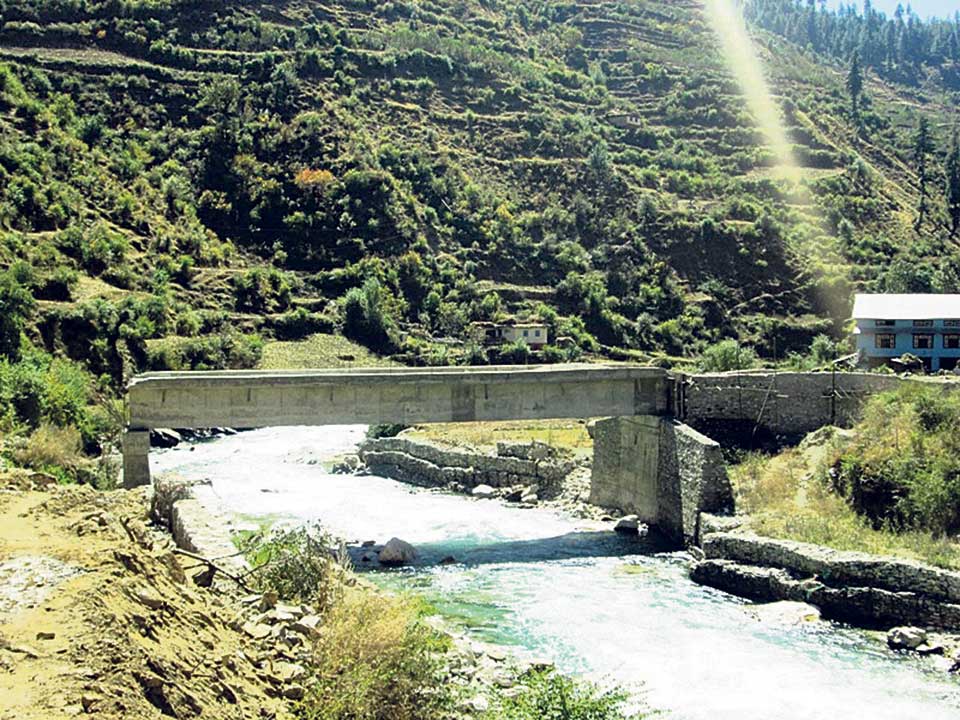 JUMLA, Oct 25: A road linking Khalanga, the district headquarters of Jumla, to Patarasi Rural Municipality has remained useless since the last 10 years due to lack of bridge.

Although jeeps and tractors operate from Khalanga's airport to Urthuchautara Bazaar, travelling further to Patarasi isn't possible because of the absence of bridge.

The delay in construction of a bridge joining ward 10 of Chandannath Municipality and Guthichaur Rural Municipality has disappointed the locals. The deadline for constructing the bridge has been extended multiple times, without any achievement. As a result, vehicles haven't been able to run smoothly even in areas with road network.

Currently, locals use mules to travel. Abhiraj Bista, a local of Patarasi, said that the absence of bridge has prevented the locals from transporting their crops and vegetables to the market areas.

“The vegetables we produce decay and go wasted in the villages without reaching the market,” Bista complained. The construction of the bridge was supposed to complete before Dashain. However, the construction is still not over even after the completion of the festival.

Another road linking Tila Rural Municipality to Tatopani Rural Municipality was also constructed some 10 years ago. However, a bridge is yet to be constructed at Triweni, Kudari. The then District Development Committee (DDC) had allocated Rs 3 million to build a wooden bridge to allow vehicular movement. However, flooding in Tila River destroyed the under-construction bridge.

It is believed that the recent local election has further delayed the construction. Irregularities in the construction process and the use of sub-standard materials are said to be the prime reasons behind the delays.

JUMLA, May 9: With the election date approaching nearer, locals of Jumla are determined to participate in the polls and vote... Read More...

JUMLA, Jan 21: Lal Bahadur Budha of Sanigaun village sells at least 10 quintal of beans every year. He has been... Read More...