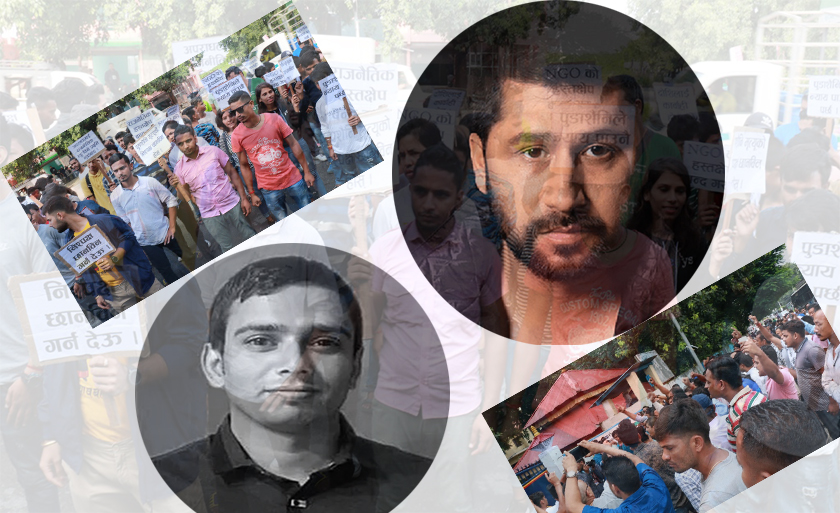 KATHMANDU, August 18: Legal practitioners, journalists and civil society people have unanimous opinions that there should be no hurdles in conducting a fair and independent investigation into the death issue of journalist Shalikram Pudasaini.

In a press statement today, various organizations have demanded a fair inquiry into the case, and action if anyone is found guilty in it. It has been stressed that none should take a move capable of influencing the investigation process when some people have already been under police investigation.

"The right to give a final verdict in regard with the case is with the court and it would keep no meaning to be judgmental at an individual level," they said. According to Nepal Bar Association Chitwan former president Gopilal Devkota, the authorized body holds the right to take 'suspects' under control for investigation. Three people including television program presenter Rabi Lamichhaine have presently remained in police detention for investigations into the case. The court should be allowed to settle the case without any undue pressure, he asserted.

Police said the investigations into the death of journalist Pudasaini had begun basing on his mobile phone's video footage which mentioned some names abetting his suicide. In view of Federation of Nepali Journalists (FNJ) chair Radheshyam Khatiwada, there is no alternative to waiting for the court verdict in regard with the case. Chitwan's Superintendent of Police Dan Bahadur Malla said unwanted activities taking place in Chitwan in regard with the case were under the police scrutiny.

The FNJ few days ago had issued a press statement, seeking a fair investigation into the matter. More, it has expressed its concern over the arrest of a journalist from the Medical Village. The Civil Society, Chitwan on Sunday through a press note sought an atmosphere for impartial investigations into the case.

The society has called on the civic community not to create any sorts of pressure to influence the inquiry and to contribute for fair and just investigations. The video clip recorded by Pudasaini before his suicide was made public on Thursday. On the basis of it, police had arrested News 24 program presenter of Sidha Kura Janata Sanga, Lamichhane; Yub Raj Kandel associated the same program and Asmita Karki aka Ruku of Okhaldhunga and taken them to Chitwan.

They had been produced to the Chitwan District Court on Friday and been remanded to five-day custody. According to the police, the digital test of the video has been already conducted and it has been confirmed to be recorded by journalist Pudasaini himself. The Criminal Code of Nepal has the provision of a jail sentence up to five years and fine of 50,000 if anyone else is convicted of abetting a suicide.

This was a case of dispute among IGP contenders and Supreme Court was the right authority to review the appointment process Read More...