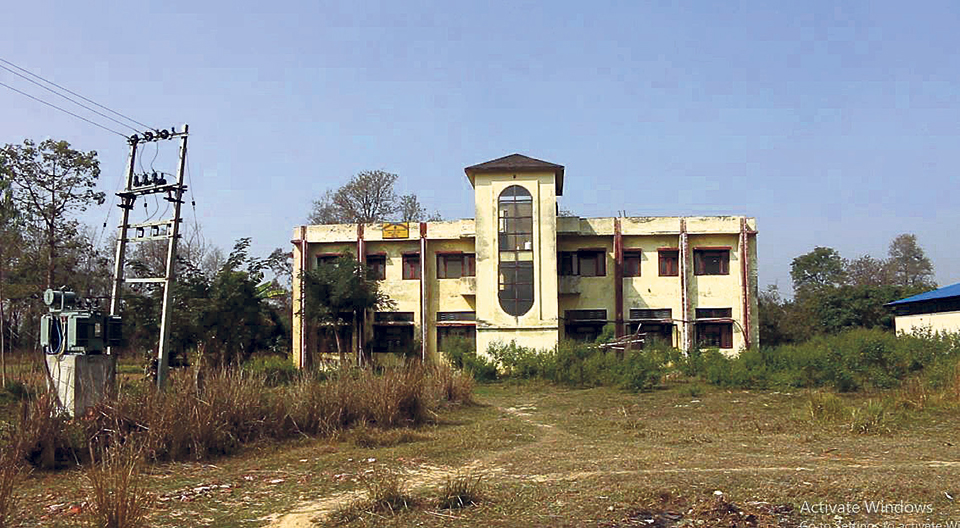 NEPALGUNJ, Mar 1: Though a printing press of Janak Education Material Center (JEMC) was established at Khajura of Nepalgunj some 15 years ago, the government-owned publication house has failed to supply text books to several districts of Province 5, Karnali and Sudur Paschim.

The printing press was established in 2006 aiming at printing books for the mid-western and far-western districts. But, the printing press has not been operated till date, leaving several districts in a shortage of textbooks at the starting of the academics session.

The building of the printing press was constructed with an investment of Rs 10 million in an area of four bigahas. Then, two more buildings were constructed at a cost of Rs 20 million. Those buildings, constructed for the printing press and warehouse, remain unutilized till date. Likewise, the 'two color' machine in the press is also not operated. The then government had purchased the machine at Rs 7 million.

It requires an additional Rs 100 million to purchase a 'four color' machine, construct walls and other infrastructures, he added.

In the meantime, the stakeholders of the education sector believe that there wouldn't be a shortage of textbooks in the rural districts if the government operates the Nepalgunj printing press.

According to Pawan Yadav, president of Nepal Teachers Federation, Banke, the press in Nepalgunj should be operated at the earliest. “Bringing the printing press into operation would solve the problem of shortage of textbooks in rural districts during the start of academic sessions,” he said, questioning the government's intent of promoting the private sector by not operating its own printing press.

The JEMC distributes textbooks – printed in Kathmandu – in Bardiya, Dang, Salyan, Pyuthan, Rukum, Humla, Dolpa, among others from its warehouse in Nepalgunj. If textbooks are printed in Nepalgunj, students of several districts in Province 5, Karnali and Sudur Paschim wouldn't face difficulties in getting  textbooks during the start of the academic session, according to JEMC, Nepalgunj.

RUKUM, Sept 22: A month ago, Hira Khadka of Sisne Rural Municipality-6, Rukumkot, suffered from fever. She went to a... Read More...

NEPALGUNJ: An aspiring poet at ‘Word Warriors’ organized in Nepalgunj, on Thursday worked her magic on the audience as she... Read More...