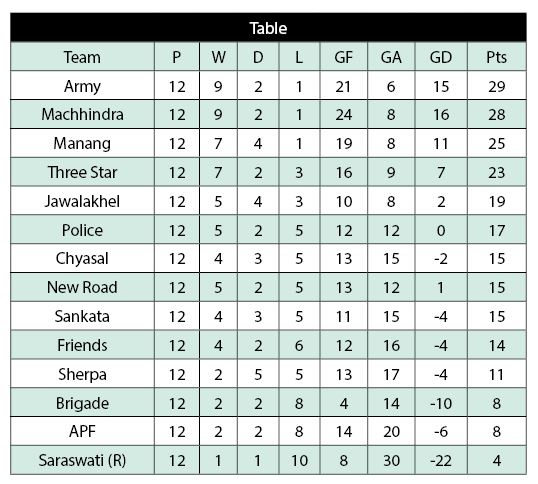 Himalayan Sherpa failed to hold its first half lead of 3-1, which could have helped the club cut the gap to two points behind Chyasal Youth Club, New Road Team and Sankata Club, which all have 15 points each.

Sherpa has drawn the highest number of games (5) this season, and its two wins have helped the club to avoid relegation as it sits in the 11th place.

Meanwhile, Jawalakhel missed a glorious chance to stay close to Three Star with a game to go and take advantage of a slip-up in the final round.

However, it can’t finish in the fourth-place or above as it is four points behind Three Star.

Now it needs to battle out against Manang Marshyangdi Club, and a loss will present a chance for sixth-placed Nepal Police Club to get ahead of the team with a win against Friends.

In the thrilling last game of the 12th round at the All Nepal Football Association (ANFA) Complex in Satdobato, Stephane Samir Deiubeni displayed a sensational performance as he scored twice and assisted for one goal as Sherpa led 3-1 at the end of the first half, but the club went on to concede two goals after the hour mark.

The game was really intense with six goals scored, and three yellow cards conceded along with two red cards.

Stephane gave Sherpa the lead with one of the best goals scored in the league this season. He hit a shot from the right wing, and the ball went straight into the post in just the fifth minute of the match.

He got another chance to score in the 12th minute, but his shot from the edge of the box was saved by keeper

Blon and pushed out for a corner.

Adding to his outstanding performance, Stephane gave an assist for the second Sherpa goal. He passed the ball to Bijay Shrestha, who controlled the ball well and hit a stunning shot to double the score in the 27th minute.

Jawalakhel brought in Kuber Bisht in place of Suraj Ghimire early on in the 34th minute, and a minute later, its keeper Blon was sent off for touching the ball with his hand outside the danger box.

Instantly, Sushil Kumar Yadav was also shown a yellow card for dissent toward the referee, and three minutes later, Tekendra Thapa was brought in for Yadav.

Both the teams scored a goal each in the space of a minute just before the first half came to an end.

Fode Fofana gave a brilliant pass to Bisht, who scored from inside the box to pull a goal back for Jawalakhel in the second minute of the first half injury time.

Stephane then scored another superb goal from the left side of the post a minute later to restore Sherpa’s two-goal lead.

Sherpa had an early chance in the second half through Bhishon Gurung, but the midfielder’s shot in the 46th minute flew over the crossbar.

Fofana then made the score 3-2 in the 60th minute as Jawalakhel showed signs of a comeback with high pressure attacking performance. He scored a good header to score his first goal of the game.

Seven minutes later, Sherpa was reduced to 10 players as well as Niraj Basnet was sent off for a terrible tackle. Rup

Bahadur Lama stood up to take a free kick and he put the ball straight into the top corner in the 68th minute to equalize the game.

Then both the teams were unable to add more goals, and the six-goal thriller came to a fitting end.

With the result, Jawalakhel is in the fifth place with 19 points from five wins, four draws and three losses, while Sherpa stays 11th and has 11 points including two wins, five draws and five losses.

KATHMANDU, Sept 11: The Kathmandu Metropolitan City (KMC) has provided Rs 1 million, in cash and kind, to each of... Read More...