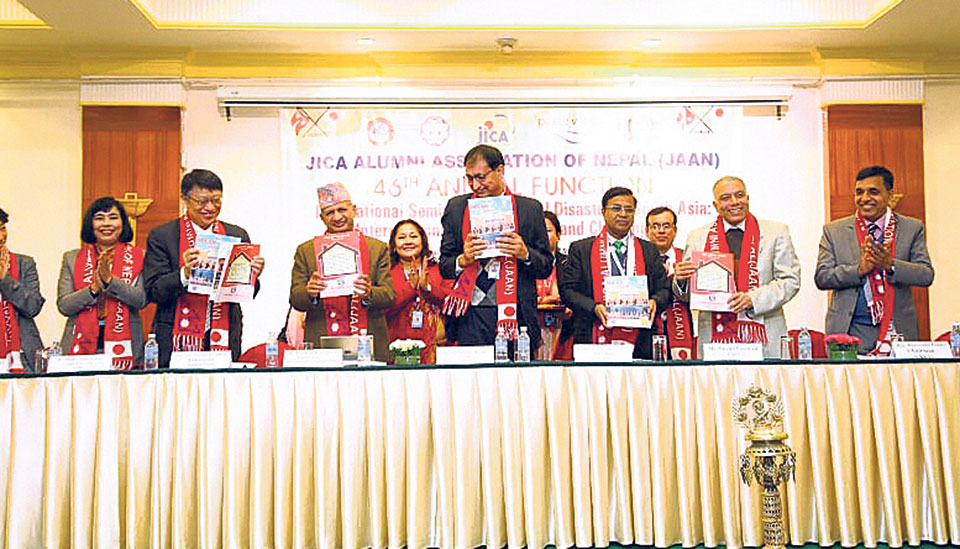 Inaugurating the 46th Annual Function of JICA Alumni Association Nepal (JAAN) and International Seminar on “Natural Disaster in South Asia: Interventions, Best Practices and Challenges” held in the capital on Friday, Foreign Minister Gyawali said Nepal and Japan had enjoyed excellent cordial bilateral relations ever since the establishment of formal diplomatic ties between the two countries in 1956. “JICA has been helping in reconstruction and recovery especially of schools and health posts. We thank the people and government of Japan for this,” he said.

While recalling his visit to Japan in November this year, Gyawali said that Japan has been a longstanding development partner of Nepal. On the occasion, he also launched JAAN's annual publication – ‘MILAN’ – which contains scholarly articles from experts from Nepal, JICA, JAAN and other countries in South Asia.

JICA Nepal's chief representative Yumiko Asakuma highlighted Japan's contribution to Nepal's reconstruction process after the 2015 earthquakes and various other cooperation projects launched with Japanese assistance.  She expressed the hope that JAAN and JAAFSC will contribute to further strengthening the relations between Nepal and Japan.

Various scholars and representatives from South Asia presented papers on the theme of Japan-Nepal relationships and natural disasters, which they said, are the common problems for all countries in South Asia.

According to Ram Chandra Bhusal, president of JAAN and General Secretary of JAAFSC, the international seminar has been organized to share lessons and best practices of South Asian countries in matters of disaster management so as to enable each country in the region to be better-equipped to overcome the challenges facing the region in disaster risk management.