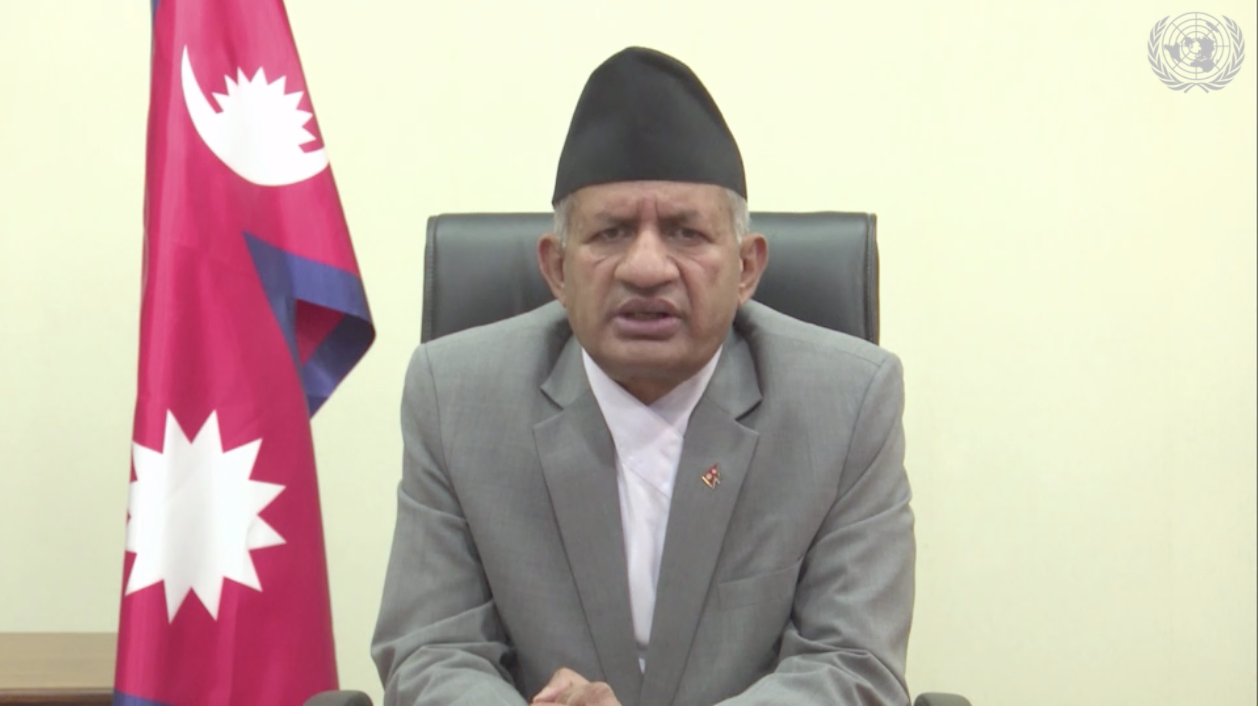 KATHMANDU, Feb 24: Minister for Foreign Affairs Pradeep Kumar Gyawali has addressed the High-level Segment of the 46th Session of the Human Rights Council via a pre-recorded video statement on Wednesday.

In his statement, the Foreign Minister stated that the world continues to bear the brunt of the COVID-19 pandemic and the development of vaccines and vaccination drive give a hope to every country, including Nepal. While appreciating the neighbours India and China as well as COVAX initiative for the vaccine support, he apprised the international community that Nepal has already rolled out vaccination programme to the priority population.

Minister Gyawali expressed Nepal's total and unequivocal commitment to the promotion and protection of human rights and further underscored Nepal's firm belief in the universality, indivisibility, interdependence, interrelatedness and mutually reinforcing nature of human rights, including the right to development.

He emphasized that the universally recognized human rights values and principles are enshrined in the Constitution of Nepal, including with equality, non-discrimination, justice, and the rule of law, among others, and further highlighted on the special measures to enable weaker sections of society. He also underlined the importance of civil society, human rights defenders, and the media in the promotion and protection of human rights. “We have incorporated Sustainable Development Goals into our national development plan with a view to realizing them by 2030.

Complementing the SDGs, Nepal at present is focused on realizing the national aspiration of “Prosperous Nepal, Happy Nepali”, added Foreign Minister Gyawali. The Foreign Minister reiterated Nepal’s commitment to ensuring full enjoyment of all human rights for women and girls while highlighting its progress in terms of gender equality and women empowerment. Underlining Nepal’s pledge to eliminate all forms of child labour and child marriage, he further underscored Nepal’s commitment to upholding the rights of persons with disabilities.

Foreign Minister Gyawali also stressed on the need of cooperation at origin, transit and destination countries for the protection of rights of migrant workers, including women migrant workers, and combating human trafficking. On climate issues, he laid emphasis on the importance of delivering on climate commitment at national, regional, and global levels to enable people fully enjoy all human rights.

He also reaffirmed that there would be no blanket amnesty in cases of serious violation of human rights, and further mentioned about the investigation on the incidences of conflict-era human rights violations by the transitional justice mechanisms, including the Commissions. Foreign Minister also thanked the UN Member States for their support to Nepal’s re-elections to the Council and the CEDAW Committee. The 46th Session of the Human Rights Council commenced on 22 February.

This year, the Council’s annual high-level panel discussion on human rights mainstreaming is focused on theme of ‘The state of play in the fight against racism and discrimination 20 years after the adoption of the Durban Declaration and Plan of Action and the exacerbating effects the COVID-19 pandemic has had on these efforts.’

The Nepali delegation led by Foreign Minister Gyawali comprised of the Secretary at the Office of the Prime Minister and the Council of Ministers, and the Secretaries at the Ministry of Foreign Affairs, and the Ministry of Law, Justice and Parliamentary Affairs including the Nepali Ambassador and Permanent Representative in Geneva and other senior officials of the Government of Nepal.

Citizenship Bill endorsed by parliament is not in the interest of Nepali citizens: Gyawali

No one is excused for indulging in corruption: Minister Gyawali