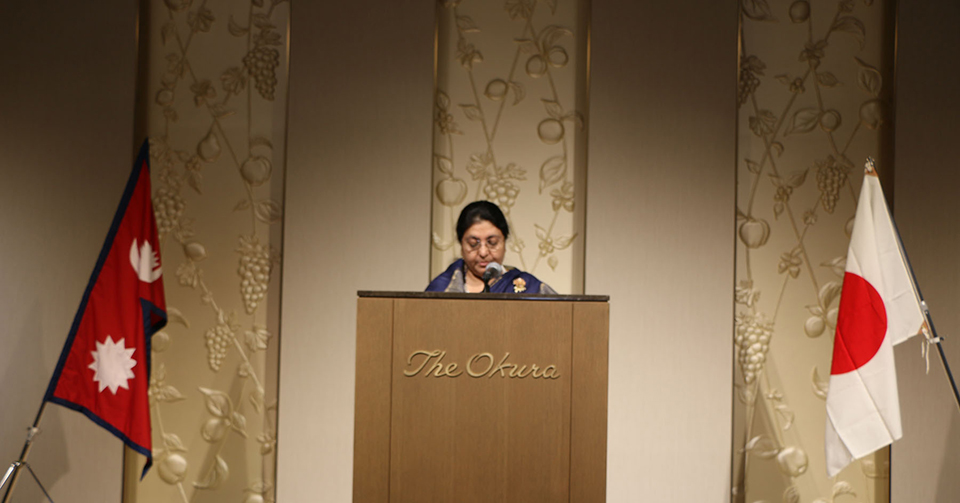 TOKYO, Oct 21: President Bidya Devi Bhandari, currently on an official visit to Japan, has said that Japan is the major development partner of Nepal.

Speaking at a reception organized in her honor at the Nepali Embassy here today, she said Japan has always stood as a good and reliable friend for the Nepalis at times of need and sorrow. She extended gratitude to Japan for its support in the rescue, relief and rehabilitation following the 2015 Gorkha earthquake.

"Nepal and Japan have been enjoying close relations since the establishment of diplomatic relations in 1956, and exchange of mutual visits have further strengthened the relations," she said.

President Bhandari also extended heartfelt condolences, on her own and on behalf of the Nepali people, to the people of Japan for the loss of life and property suffered in the recent typhoon in the country.

Noting that the Banepa-Bardibas BP Highway was an inspiring model of cooperation between the two countries, President Bhandari said that the Nagdhunga-Sisnekhola tunnel way, the foundation of which was laid in Kathmandu today, would add a new dimension to the sector of tunnel way in the country.

She also pointed out the need for external support in realizing the national aspiration of 'prosperous Nepal, Happy Nepalis', while appealing to Japanese investors to invest in Nepal's infrastructure, water resources, tourism, production and employment generation sectors.

The President expressed the confidence that there would soon be direct flights between Kathmandu and Narita, which would bring in more Japanese tourists to Nepal in the Visit Nepal Year 2020.

Speaking at the programme, General Secretary of Japan's ruling Liberal Democratic Party Toshihiro Nikai shared that a target has been set to send 60,000 Japanese citizens to visit Nepal during VNY 2020. Toshihiro is also the Chair of Nepal-Japan Parliamentary Guild.

Nepali Ambassador to Japan Pratibha Rana said homework was being done to have an exchange of visits by the Prime Ministers of Nepal and Japan next year.

Also present at the programme were Home Minister Ram Bahadur Thapa, Foreign Secretary Shanker Das Bairagi, and other members of the Nepali delegation.

On Tuesday, President Bhandari is scheduled to take part in the enthronement ceremony of the Japanese Emperor and also hold talks with her Indian counterpart Ramnath Kovind.

KATHMANDU, May 23: President Bidya Devi Bhandari has issued an ordinance which amends the existing act on citizenship in Nepal. Read More...

KATHMANDU, Dec 22: President Bidya Devi Bhandari has been dragged into yet another controversy after she summoned influential ruling Nepal... Read More...

Electoral alliance a must to safeguard democratic values: Minister Shrestha
40 minutes ago