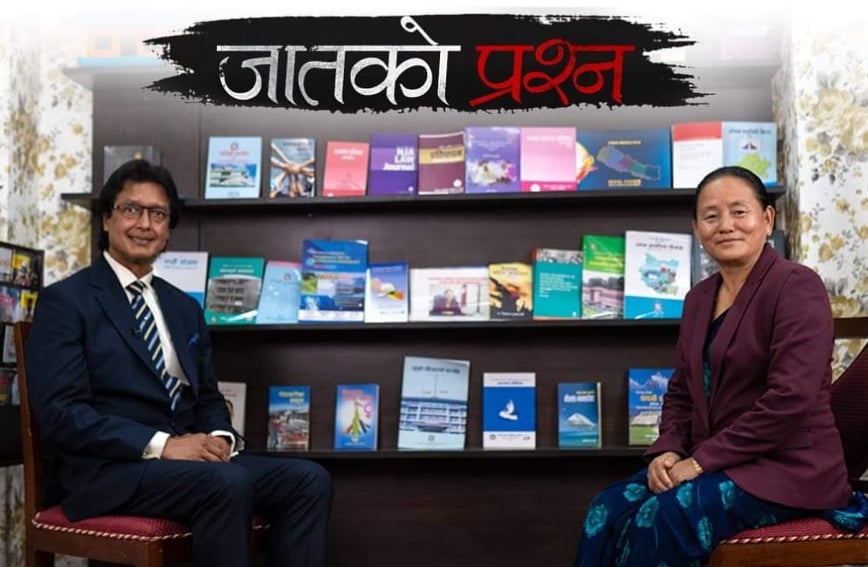 KATHMANDU, Oct 12: Rajesh Hamal as an actor and individual mostly avoided controversies during his career. However, Jaatko Prashna, a recent TV talk show hosted by Nepal’s celebrated actor, has generated animated discussion on social media platforms. Social media users claim that the program, produced by Samata Foundation with an aim to fight caste discrimination, is being run with support from Christian Aid Nepal. Amid reports of massive conversion of Hindus into Christianity in the rural and impoverished parts of the country, critics have raised alarm over a Christian organization's sponsorship of the show. The program kicked off on August 01, and Hamal has already interviewed former prime ministers Sher Bahadur Deuba and Baburam Bhattarai, Police Chief Shailesh Thapa and writer and political analyst Aahuti, among others.

"As good as the program 'Jaatko Prashna' (hosted by Rajesh Hamal) is, I find it interesting that it has been made in collaboration with Christian Aid Nepal", tweets Sulav Signdel via his twitter handle @ssigdel2itz

"I regret that superstar Rajesh Hamal was not able to understand that he was simply being used as a tool by the western imperialist, they want to destroy our foundation and for that are ready to make any huge investments," writes M Singh on Facebook.

Lal Babu Bhandari is equally alarmed. His twitter handle @BabuLalBhandar2 suggests that the program run by Hamal is timely and needful, 'but getting to know about the sponsor was not pleasant'.

Filmmaker Dipendra Lama comments on his Facebook post that it was the foreigners and Christians who taught civic sense in Nepal. Using soap to wash hands, feeding nutritious meals to children were all taught by Christians. He further writes that watching the episodes of 'Jaatko Prashna' did not make him feel there is a hidden interest. "Most of the people seem to have been bothered by the content rather than the donor. Some people are not happy that caste discrimination is being questioned. Such programs are most welcome even if Al Qaeda sponsors it," he says.

Writer Archna Thapa has endorsed the show by sharing a promo on Twitter. She has shared Hamal's interview with Sarita Pariyar, a Dalit activist and writer.

Talking to Republica, Kiran BK, a Dilit activist, said that the attack on the show was expected as it tries to portray the dogmatic society whose pillar is the caste system and patriarchy. He said that the host should not have been Hamal, who never faced caste discrimination. "That makes the performance superficial, which I have noticed," he added.

KATHMANDU, Aug 12: The Department of Commerce, Supplies and Consumer Protection (DoCSCP) on Monday fixed the maximum retail price of the... Read More...