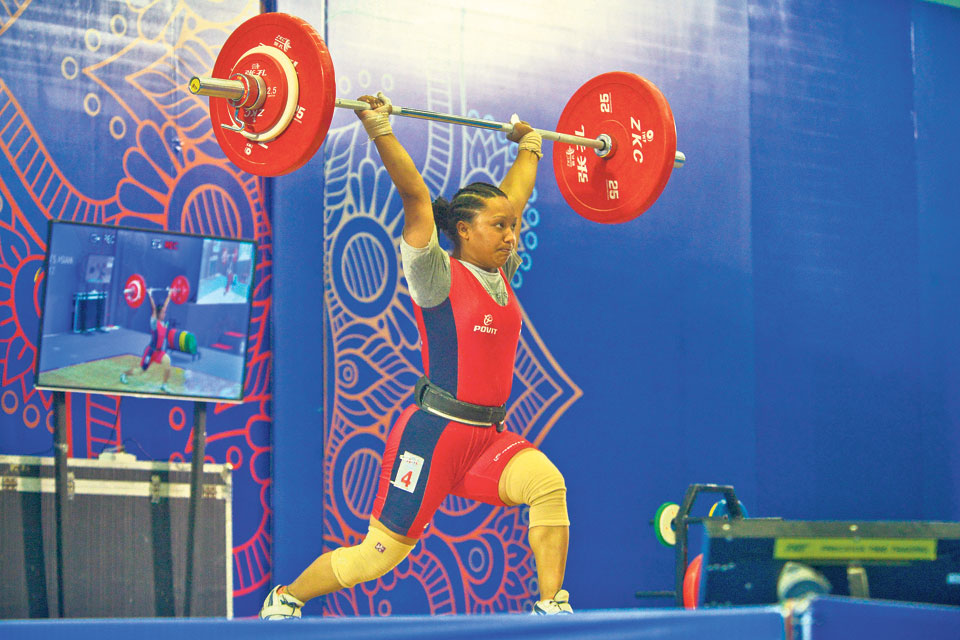 The tournament was held at Army Physical Training and Sports Complex in Lagankhel, Lalitpur, from June 21 through 29.

Going by the number of participating nations, it was the biggest sports event hosted in Nepal in the history.

In order to help nurture the Nepali talent, the federations have pledged to provide training opportunities to Nepali players in well-equipped modern facilities abroad, according to Ratan Kumar Tandon, president of NWA.  “The president of IWF and general secretary of AWF praised the performance and talent of our players. They have promised to provide training opportunities to some of our players abroad,” said Tandon: “This was one of the most notable things among the achievements we had from this tournament.”

He further informed that the federations have pledged to bear all the costs of selected Nepali players for international training.

The championship saw 148 male and 93 female lifters from 32 countries vying for a total of 96 gold medals -- 48 each in men’s and women’s categories.

Meanwhile, the AWF conducted its general assembly on the sidelines of the championship. Delegates from 37 countries came for the assembly. Various AWF committees also held their meetings here.

IWF president Tamas Azan and AWF general secretary Mohamed Jaloo were among the notable delegates to land in Kathmandu to observe the championships.

“We always wanted to host such big event to stand at the international level proudly and we did it successfully. Everyone including players, coaches and other delegates praised our hospitality,” said Tandon when asked about the achievements.

“Since this event saw top-level players competing, hopefully our young players learned a lot watching them.”

Nepal was supposed to host the Asian Senior Men’s and Women’s event in July 2015, but due to earthquake, NWA was unable to organize that competition. However, AWF gave it another chance to host Asian-level championships.

Meanwhile, a total of 13 Nepali lifters participated in the championships including nine in men’s and four in women’s section. However the performance of the Nepali players was limited to setting new national records and improving their personal bests. The host nation had fielded Tushar Budha Magar and Sagar Bhandari in men’s youth category while Ganesh Ranabhat, Ram Kumar Yadav, Sajarudin Alam, and Prakash KC took part in men’s junior category. Likewise, Suraj Vaishya, Bishal Singh Bista, and Jaidi Koju participated in the men’s youth and junior categories.

In the women’s junior section, Sanju Chaudhary, Tika Maya Gurung, and Kamala Shrestha were fielded while Kabita Chaudhary competed in both youth and junior categories.

Among the participants, Sanju and Kamala were the ones to set national records while Prakash marked new record in junior category only.

Meanwhile, Tandon expressed his satisfaction over the performances of his players despite none of them reaching anywhere near to winning a medal.

“We wanted our players to improve their personal bests and mark the national records and they did that. So our whole weightlifting team is satisfied,” added Tandon.

He further said that the performances in the Asian championships will now motivate Nepali players to do well in upcoming South Asian Games (SAG) which is also scheduled to be hosted in Nepal.   “Now our target is to improve our records in the SAG. We have been conducting training regularly and hopefully the players will win gold this time,” Tandon added.

Nepal had poor performance in 2016 SAG held in India, bagging just one silver and three bronze medals.    “Despite the limited resources, we hosted Asian level event successfully,” Tandon added: “I think this will inspire other associations to host big events in future.”

KATHMANDU, Feb 4: Millions of Nepali migrants living and working in various foreign countries are not likely to be able to... Read More...