It’s the journey that matters 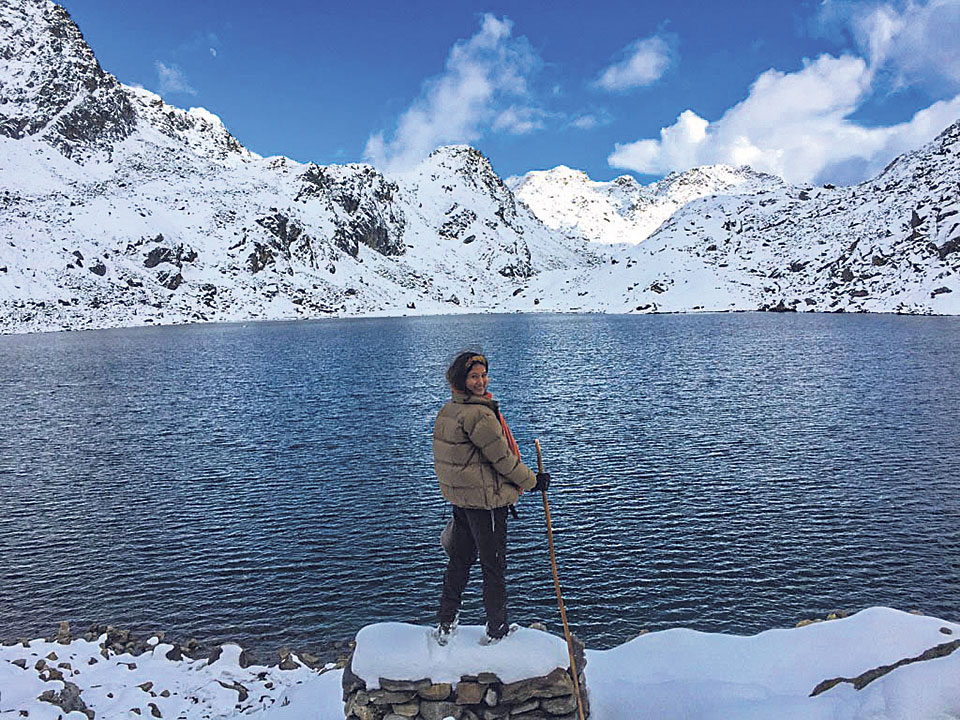 “I travel because it makes me feel free and unrestricted. It has taught me to treasure the small moments that make up my life and not to cling on to the concept of forever,” says Anima Piya. She is an avid traveler from Chitwan who is currently residing in Kathmandu and working as a Civil Engineer at a consultancy in Kupondole, Lalitpur. Till date, she has traveled to Tilicho lake, Lomanthang in Upper Mustang, Phoksundo lake, Gosainkunda lake, London, South Korea, and Bali among other destinations.

Piya’s love for traveling began when she trekked to Ghandruk with her friends after completing her A Levels – back in 2012. She mentions that this was the first time she saw mountains up close and the view of the Annapurna Range alone moved her so much that she decided then and there that she wanted to see similar views at least once every year. Since then, every year around October-November, Piya sets out to trek another trail with her friends or family.

In between that, she also fits in travel expeditions to other destinations but she states that since late autumn is the perfect time for trekking, she schedules her yearly treks during this time. Bali was the last place Piya travelled to – about two months ago. And although she enjoyed her weeklong trip there, she reveals that being surrounded by the sea made her miss the mountains a lot. “I realized during this trip that I prefer trekking in the mountains and hiking up the hills to relaxing at beaches,” says Piya adding that both kinds of travel destinations and styles have a charm of their own.

One of the most important aspects to sort out before you travel, according to Piya, is who you are going to travel with as she believes it makes a world of a difference. She states that whenever she travels with people she is compatible with, the whole trip passes by smoothly. She claims that she can’t stand people who complain and admits that time and again she has turned down offers of traveling with some people because she knows she isn’t compatible with them in terms of travel preferences and such.

Because she values experiences and small moments that make up her expeditions, Piya admits that the journey is often times more enjoyable and rewarding for her than the views she gets to see when she reaches her final destination. She states that she likes spontaneously stopping at different points on her way to talk to the locals and find other lesser-known areas to explore. Trying out different local food items is another activity that she enjoys immensely while traveling.

A travel memory that Piya thinks will stay with her forever is how she got caught in a snowstorm while trekking to Tilicho. She reveals that this was the first challenging trek she had embarked on – right after the Ghandruk one – and a friend of hers had accompanied her on this trek. Both Piya and her friend decided to leave the base camp a little late – at around eight in the morning instead of six which is the usual departure time for most trekkers – as they were planning to stay the night near Tilicho lake.

But they had only seen so much as a glimpse of the lake when the whole area suddenly got very foggy and people around them – both travelers and locals – started panicking. The locals advised them to return to the base camp as soon as possible because fogs usually signify an upcoming snowstorm and revealed that even they (the locals) always descend to the base camp as the storm often makes living (near the lake) unbearable.

As they were descending, Piya and her friend got caught in the snowstorm and Piya remembers thinking that if she took one wrong step she could actually die there. “That was when I understood that it’s really the journey and the things you learn during it that matters. Not the end destination,” she says.

She also states that another thing travelers – especially high altitude trekkers – can take away from this story is to always start your journey as early in the day as possible. She explains that because nature and natural happenings are unpredictable, one should take the first chance they get to explore destinations and not wait for minor things to fall into place.

Recently (early September this year) Piya opened a new Instagram account, (@soultraveler_piya) that she is plans on using as a travel account – documenting memories from her trips and treks. She remembers her English teacher in school telling her that her name, Anima, meant soul in Latin. And since she sees her travel escapades as things that rejuvenate her soul, she thought naming her page ‘soul traveler’ seemed appropriate.

In the near future, Piya is planning to travel to Bardia, Khaptad, and Annapurna Base Camp. She admits that although she wants to travel a lot more, her work doesn’t always allow for it. She reveals that she is looking for ways to incorporate traveling into her work. As someone who has been interested in environmental science from a young age, she wants to work on decreasing pollution and managing the waste problem in Nepal – as those are a few things that directly affects the tourism and travel sector.

NA set up camp at Lomanthang

MUSTANG, Nov 5: The Nepal Army (NA) has set up a camp at Lomanthang of upper Mustang. The army camp was... Read More...