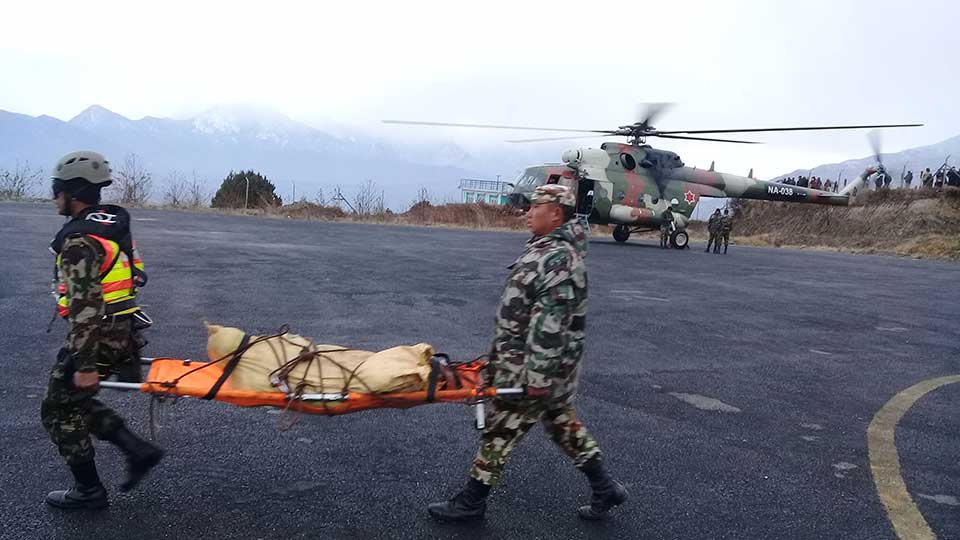 PANCHTHAR, Feb 28: It was around 1 pm and Sukbir Bhattarai of Mayam, Taplejung was collecting fodder for his cattle with his brother when he saw a helicopter flying overhead with a loud noise. “Our eyes were still on the chopper when we saw it hit a cliff and fall down in pieces after a blast,” said Bhattarai. “By the time it fell down, it was all smoke and fumes.”

The Air Dynasty chopper carrying Minister for Culture, Tourism and Civil Aviation Rabindra Adhikari along with six others crashed at a place called Setopahara, according to Bhattarai. “We were collecting fodder. We could not believe our eyes. It felt like a bad dream,” he said.

The crash site was just a kilometer away. “Dense fog made it hard to see. It was snowing as well. We were horrified and immediately informed the District Police,” he added. He was reportedly the first to inform police.

The crash occurred south from Krishnavir and north from Pathivara. Police and locals rushed to the accident site for rescue work. It was a topographically difficult area. “It took around an hour for us to reach there,” said Ghanshyam Paudel, a local, adding, “I had never seen such a deadly accident.” It was a challenge for police to recognize the charred bodies.

PANCHTHAR, Feb 27: Seven people including Minister for Culture, Tourism and Civil Aviation on board the Air Dynasty died when... Read More...