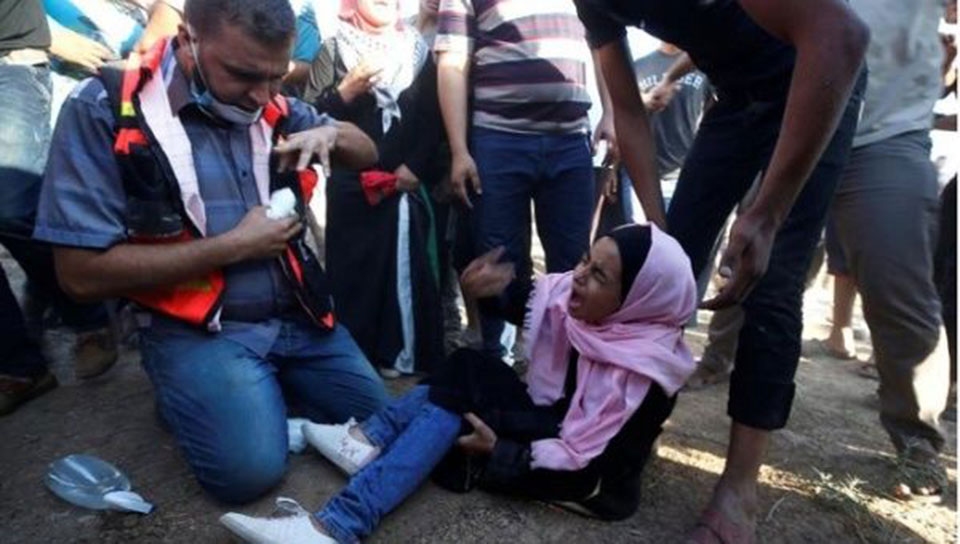 Medics said Israeli gunfire killed two men and wounded at least 270 other Palestinians, 40 of them with live bullets. | Photo: Reuters

TEL AVIV, Aug 18: Israeli forces opened fire on a group of Palestinian protesters, killing at least two and injuring over 40, during a demonstration near the eastern Gaza Strip, the Gaza Health Ministry said Friday.

Medics said Israeli gunfire killed two men and wounded at least 270 other Palestinians, 40 of them with live bullets.

The deceased were later identified as 30-year-old Karim Abu Ftair and Saadi Akram Muammar, 26, the Palestinian Health Ministry said in a statement.

Some 20,000 people participated in Friday’s protests, which took place a few hundred meters from the fence, though dozens came closer, with some rolling burning tires, Reuters reports.

An Israeli army spokeswoman said troops had responded with “riot-dispersal means” to prevent breaches of the border.

So far at least 170 Palestinians have been murdered by Israeli forces since the weekly protests began on March 30. The campaign is pressing for rights to land that Palestinians lost to Israel in the 1948 war of its foundation, and for an end to the Israeli-Egyptian blockade of Gaza.

Palestine’s Hamas spokesman Abd al-Latif al-Qanuaa said, “The Great March of Return has confounded the calculations of the occupation and forced it to take its [the march's] demands into consideration.

“[The protests] will continue until we achieve all of our goals. Our people's sacrifices will not be in vain, and will translate into national achievements,"  Abd al-Latif al-Qanuaa.

Anger in Gaza has also been stoked by funding cuts by the Western-backed administration of Palestinian President Mahmoud Abbas, which dominates the West Bank and is the rival of Hamas, which runs Gaza. Their efforts at agreeing on a power-sharing unity deal with Egyptian mediation have not borne fruit.

During skirmishes earlier this week between the Gaza Strip and the Israeli border, a Palestinian sniper gunned down an enemy soldier. The Israeli army returned the single attack by sending a troop of 180 rockets and mortars in varied airstrikes.